TD Bank (NYSE:TD) is a unique company in terms of its business model, as well as its track record of success. In fact, Money magazine recently named TD Bank "America's Best Big Bank" of 2014.

However, TD Bank has significantly underperformed the rest of the financial sector and the S&P 500 in 2014. While the S&P has gained about 12.5% and the financial sector as a whole has gained 13.5%, TD Bank is slightly down for the year, mainly because its recent 2014 fiscal year earnings failed to impress the market. Here's why I think TD Bank could have a great year in 2015, and for decades to come.

TD Bank has grown at an impressive rate for many years, but its U.S. growth was kicked into high gear in 2008, when the company acquired New Jersey-based Commerce Bancorp.

After the acquisition, TD adopted Commerce's philosophy of becoming "America's most convenient bank." Most TD branches are open seven days a week and have extended hours, so people who work full-time jobs still have time to go to the bank if they need to. In fact, if you have to work late on payday, you can go through the drive-through until midnight in many locations. You can even bring your dog inside with you.

Growth: past, present, and future
The growth TD bank has produced over the past decade or so is rather impressive. For starters, the bank has nearly tripled its assets through a combination of acquisitions and organic growth. And net income has quadrupled from about $1.8 billion per year to more than $7.2 billion during that time period.

TD's shareholders have been rewarded with an average annual total return of 12.4% over the past decade, handily beating the S&P 500. And the growth isn't done yet.

Over the past year alone, TD Bank's net income grew by almost 19%, and adjusted earnings per share increased by 15%. The company saw strong growth in Canadian retail banking ("TD" stands for "Toronto-Dominion") and its revenues from TD Ameritrade, and it saw impressive 31% annual growth in its wholesale banking business.

Analysts seem to think this trend will continue, as earnings are expected to grow by about 28% over the next three years. The consensus expects 12% annual revenue growth for the next five years, which seems reasonable, given the bank's recent history.

A long-term winner
TD Bank's growth and asset quality are a winning combination that should serve shareholders well, no matter what the market is doing. Just look at how the bank performed during the 2008-2009 financial crisis compared with its U.S. banking peers. 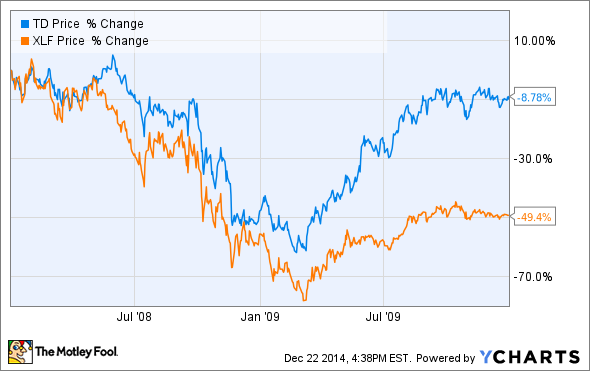 TD Bank never even cut its dividend, which is very important for retirees and other income-seeking investors. It's worth noting here that TD pays its dividend in Canadian dollars, so it may go up or down as a result of currency fluctuations, but that has nothing to do with the stability of TD's business.

In fact, TD's dividend has grown at a 12% annualized rate over the past two decades, which is exactly the kind of performance that dividend investors love to see. With a very healthy payout ratio of less than 45% for 2014, there is no reason to believe this pattern won't continue, especially with the bank's expected growth rate over the next few years.

TD Bank is a long-term winner that you can buy at a discount going into 2015 that should produce excellent growth in your portfolio for years to come. The 3.5% dividend yield is among the best in the banking sector, and it should keep getting better.