Comcast (NASDAQ:CMCSA) is in the process of buying its largest rival, fellow cable service Time Warner Cable (NYSE: TWC). The buyout has been delayed several times, but still appears to be on track for approval.

But not if satellite broadcaster DISH Network (NASDAQ:DISH) has a say in the matter. In a document filed with the Federal Communications Commission on December 22, DISH laid out a couple dozen of the best reasons why the FCC should deny the merger application, neatly organized into 10 categories.

Here are three of the strongest arguments DISH makes against Comcast's Time Warner Cable buyout. Caution: Legal and procedural filings are normally pretty dry, but this one gets downright entertaining sometimes.

"You can check out any time you like, but you can never leave"
Comcast has claimed that consumers would leave the service if the company started behaving badly. Hence, it would not be in Comcast's best interest to raise prices, limit choice, or restrict service quality once the proposed merger is completed. The claim is supported -- but sadly redacted in this public version of a legal filing -- by the high number of people who leave Comcast's service on a monthly or quarterly basis.

But DISH says that this suggestion is "demonstrably false." The defection rates bake voluntary departures in with forced churn as customers move, get fired, die, or otherwise have no choice but to cancel their Comcast subscriptions. DISH writes:

Comcast is almost like the Hotel California of broadband, an establishment guests can check into but never leave. The Netflix (NASDAQ:NFLX) incident provides a further and conclusive demonstration of this fact. There is no dispute that, in December of 2013 and January of 2014, the quality of Netflix's video went from viewing content at 720p on average (HD quality) down to 'nearly VHS quality.' What did Comcast's subscribers do? According to Comcast, many of them called. But how many left? Comcast's own data reveal that **REDACTED**.

The tasty Eagles reference is just icing on the cake. DISH has a solid point to make here.

I'd love to see the full text of this document, but context makes it clear that the censored figures don't tell Comcast's preferred story at all. Given the well-documented lack of viable alternatives to Comcast's Internet services in many areas, even bad and overpriced service is rewarded with crazy-high customer retention. There's just nowhere else to go.

Does Comcast's merger team read what the marketing guys write?
Comcast claims that almost everyone has access to multiple broadband services, such as DSL subscriptions from the local telecom service. DISH finds that argument unconvincing, as cable tends to crush DSL alternatives with market shares of 98% or more where those two options are available. DISH writes: 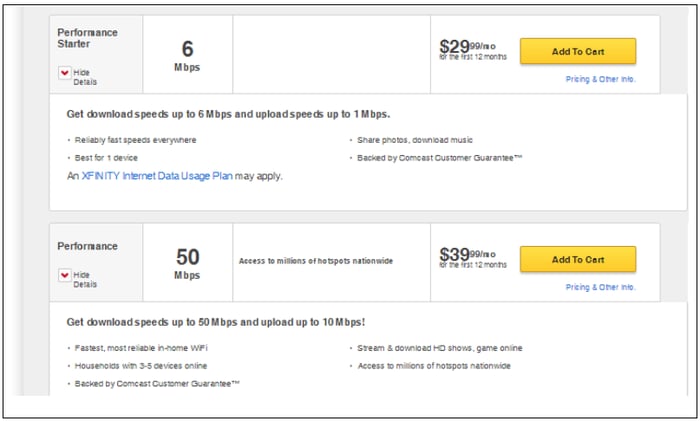 (Figure 1 from the DISH filing.)

It's an age-old strategy: Set the bar for what the consumer might need higher or lower depending on which argument you're trying to support. It's also blatantly misleading and downright tiresome.

In Comcast's defense, 4 Mbps is indeed enough to support a high-def Netflix or YouTube stream today. But then you're filling the entire pipe with one content stream, leaving little room for the kids to fire up another video on a tablet, or even browsing the web while your spouse watches a movie. And when 4K video becomes the gold standard for high-definition video -- don't laugh, it'll happen in 2016 at the latest -- that tired old 4 Mbps service just won't be able to keep up anymore.

Netflix recommends Internet speeds of 25 Mbps or above to play one Ultra HD -- read: 4K video -- stream. DSL services typically tap out way below that level, and tend to be expensive if you're lucky enough to have true high-speed DSL plans available.

Comcast's marketing team largely wins this round over the company's legal writers. Slim broadband pipes may be good enough for now, but won't stay that way for much longer. And fiber-based telecom services are more of a luxury than the norm. When you exclude bandwidth-challenged DSL services from the comparison, Comcast stands without real competition in many of its markets -- as does Time Warner Cable.

This point supports the first finding. With nowhere left to turn, Comcast and Time Warner subscribers are far more captive to the cable service than either company wants to admit.

Merger applicants often lie, in general, and Comcast, in particular
DISH points out that merger applicants often make big promises to get their deals approved, and then fail to follow through on these commitments. For example, Baby Bell phone companies often promised to invest more in next-generation networks if they were allowed to recombine into larger entities. But in many cases, fiber-based deployments actually stopped rather than accelerated, and firm service-level commitments are still unfilled more than a decade later.

Merger applicant claims "should be taken with a grain of salt in the best of circumstances," DISH writes. But Comcast is painted as a particularly bad actor.

The company has been caught skirting promises made to support the NBC Universal buyout many times. Comcast hasn't followed through on delivering local news, as promised, makes it hard to buy or even discover the existence of low-cost Internet services, and imposes data caps on other online media services, while exempting its own Internet video from such restrictions.

"This history demonstrates vividly that the Commission should not be persuaded by Comcast's now-familiar refrain," DISH writes.

In other words, the Commission shouldn't be swayed by sweet promises to expand access in rural or low-income areas, leaving rivals able to compete, and not exploiting the near-monopoly powers of serving 33 million subscribers with very few realistic service alternatives.

If DISH's claims sound alarmist, it's because they are. But DISH is not the boy who cried wolf. It's actually the little boy who points out that the emperor is wearing no clothes. The Comcast and Time Warner Cable merger will be bad for consumers, bad for the broadband and TV service markets as a whole, and generally only serve Comcast's own interests. There is no "public interest" in play here regardless of Comcast trying to make that claim.

Unfortunately, this firebrand isn't likely to change the FCC's thinking. I'm afraid that we'll see exactly how Comcast's promises actually work out soon enough, as the merger is approved and executed. And I don't think it will be pretty.

Comcast According to DISH: "You Can Check Out Any Time You Like, but You Can Never Leave" @themotleyfool #stocks $CMCSA $DISH $NFLX Next Article
Current