Open source software veteran Red Hat (NYSE:RHT) reported third-quarter results recently and the company crushed analyst expectations on both the top and bottom lines. Shares jumped as much as 14% higher the day after the release, and have only climbed higher in the few days since.

According to press materials, Red Hat beat the Street by continuing to "reinforce and expand our strategic relationship with our customers." The company's products are also in strong demand as the business world moves deeper into cloud computing and Big Data analysis.

Red Hat Enterprise Linux, or RHEL, is a popular platform for running these types of services. Other Red Hat products from the JBoss middleware suite plug right into the same platform, and these Java-based tools will also run on operating systems from other companies. This two-pronged approach extends Red Hat's market reach, and accelerates its sales growth.

The company can look back at trailing 12 month free cash flow sales of $529 million on $1.7 billion in total sales, producing this lovely long-term chart: 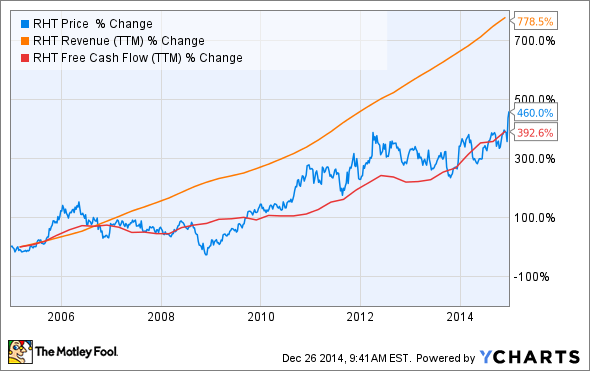 These multiyear share price highs and strong results are heartwarming to Red Hat investors like yours truly, but I wanted to know more about the forces at play behind the attractive numbers. So I got Red Hat CEO Jim Whitehurst on the phone to discuss the quarter, and to dive into some of his long-term ambitions.

Here's what he told me.

Growth drivers in the third quarter
"This sales beat versus expectations was just good sales execution," Whitehurst said. "It was generally outperformance on new order bookings. I think we're getting more strategic with our biggest and best customers. That's driving them to commit to longer-term deals with us. The average deal length rose from 21 months to 24, year over year."

For evidence of this, you can look at Red Hat's contract renewals. Of the 25 largest contracts expiring this quarter, Red Hat renewed all 25. The annual value of the resigned companies grew by about 20% on average, extending a long streak of high growth in renewed contract sizes.

How did Red Hat reclose all of its expiring large contracts, make them even larger, and generally fill the sales pipeline faster than anyone expected?

"It was just solid business. Across the world, across products," Whitehurst said. He stopped for a second, then explained how the tenor of Red Hat's customer relationships is changing.

"Really, we've gone mainstream, right? We're no longer talking to customers about whether Red Hat products are safe or reliable. All of a sudden, when people think about open source -- CIOs, even -- they think about innovation. So now when we talk to them, it's about "what are the cool things happening in DevOps, or mobile, or cloud?

"It's no longer, 'Oooh, somebody said that this is cheaper than that. Is it good enough, is it secure enough?'

"Now they assume it's good and secure, and they want to know where the next innovations are coming from," Whitehurst added. "This completely changes the nature of the relationship and helps us achieve the deals that we were able to do."

So some of the growth is so organic that it's hard to separate Red Hat from the larger groundswell of open source adoption. But that's not the entire story. I mentioned that sales and marketing expenses rose 22% year over year in the third quarter, outpacing other operating expenses by a wide margin. My question to Whitehurst was whether investment in the sales organization was starting to pay off in quarters like the period just reported.

Whitehurst's reply was quick and confident: "Yes. And we continue to invest really hard in sales, but yes -- exactly.

"Everybody knows RHEL, but we have lesser-known products that don't have the name value yet, and we're starting to see more than 50% year-over-year growth in those sales. That requires effort. Last year we said that we were investing for growth, and now we're actually demonstrating that growth."

The Internet of Things
"We have real revenue in the Internet of Things now, and it's growing nicely," Whitehurst said. "It's still in the earlier days for us. We gotta start breaking that out, or talking more about that. It's material but not massive for us."

The rise of machine-to-machine communications, connected by the bog-standard, open Internet, is opening doors for security-minded platform specialists such as Red Hat. Whitehurst explained how this megatrend taps into both the operating system and middleware sides of his company's operations:

"It's actually a combination of people embedding our traditional RHEL and a nice yield on middleware and messaging. Now that all these devices are connected to the Internet, you want to have applications on those devices," he said. "The devices have to call back, at minimum, to the mothership and often to each other.

"All of a sudden, having an application server on those mobile and embedded devices starts to make sense. You're having secure and reliable messaging technologies built into devices. And that's what's starting to drive the Internet of Things business forward for us."

Many of these devices are exposed to the public Internet and therefore vulnerable to security breaches. In Whitehurst's experience, that only adds to the value of owning an actively developed platform with remote updates, strong security, and regular system updates.

"Certainly security concerns help us compete better against traditional embedded Linux where engineers would write it once, put it on the device, and walk away," Whitehurst noted. "We have a full security response team that makes sure to push out patches often the same day as security issues arise.

"So that's really driving our business, especially in sensitive things like medical devices that are connected to the Internet," he added. "With things like that, people really want to make sure that they're going with the best possible security."

So your next heart rate monitor, or electronic blood sugar checker, or even pacemaker, might run a lightweight version of the same RHEL software found on the data center servers that process all of that data. That is not because it's cheaper or easier than other software alternatives, but thanks to Red Hat's rock-solid reputation for strong security with fast responses to new threats.

The big takeaway
Red Hat is growing like gangbusters. The growth drivers are many and varied, including rising market adoption of open source tools, reaping the rewards of heavy sales and marketing investments, and leaning on macro trends including Big Data and the Internet of Things.

I see no reason why the good times should not keep rolling for years to come. As Whitehurst said, many of these rocket-fuel containers are still in their early days, with most of their payoff yet to come. I'm particularly excited about the growth prospects for open source software and the Internet of Things, and Red Hat is a strong player in both of these crucial markets.