Please ensure Javascript is enabled for purposes of website accessibility
Log In Help Join The Motley Fool
Free Article Join Over 1 Million Premium Members And Get More In-Depth Stock Guidance and Research
By Daniel B. Kline - Dec 30, 2014 at 9:43AM

The company is growing, and it has big plans going forward.

First, Taco Bell started the year by adding breakfast in an attempt to win market share from McDonald's (MCD 1.12%). Later, to cap off 2014, Pizza Hut unveiled a massive overhaul of its menu. Dubbed "Flavor of Now," the revised choices include six sauces, eight crusts, new toppings, and countless ways to customize your pizza. It's an attempt to modernize Pizza Hut and lure in some of the crowd lost to fast-casual chains such as Chipotle (CMG 2.00%) and Panera Bread (PNRA).

Both menu changes aim to expand the audience for brands that are popular but a bit out of step with consumers. The early returns on Taco Bell breakfast have been solid, but it's too soon to know how Pizza Hut's changes will impact sales. Still, the updates show Yum! Brands knows it can't stand pat and still grow. That growth, however, will ultimately be driven by international operations, not menu changes.

The company made that clear in its December investor and analyst conference. Steve Schmitt, head of investor relations for Yum! Brands, opened the conference and shared a number of ways the company expects to grow its brands going forward.

Global growth is key
Two company brands, KFC and Pizza Hut, already have a large global presence, and Schmitt said making U.S.-focused Taco Bell a global brand was a priority going forward. The company in total already has over 41,000 restaurants in more than 125 countries, and it expects that number to grow.

"Importantly, we not only continue to expand out footprint in the countries where we operate today, but we enter new countries on an annual basis," Schmitt said.

More than 90% Yum! locations outside of China and India are owned by franchisees, and the company want to increase that to 95%, according to CEO David Novak. In addition, 40% of the company's franchise owners operate more than one brand. That base of owners, and the company's experience working abroad, should make it easier for Yum! to expand Taco Bell outside of the United States.

"Billions of dollars have been invested over the years to develop that infrastructure, get the supply chain in place," Novak said. "Now Taco Bell as it goes global -- and we have a team focused on making that happen now -- we clearly have an international infrastructure that Taco Bell can tap into."

In addition to growing in existing markets, Yum! will continue to invest in developing nations.

"We're the emerging markets leader," Schmitt said. "This is one aspect that gives us a lot of confidence that we can continue to grow at a high rate because we have such large exposure to these high growth economies." 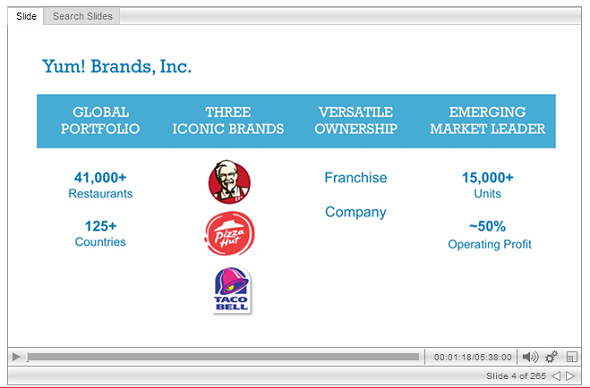 A slide from the Yum! Brands presentation. Source: Screenshot.

China is still slow
Earlier in December, the company issued a press release revising its sales growth expectation for China, where sales have been negatively affected "by adverse publicity in July regarding improper food handling practices by a former supplier."

"Unfortunately, this had a negative impact on our sales," Schmitt said. "Sales are recovering. November same-store sales were minus 15% and our forecast calls for our December same-store sales growth to improve upon that rate. That's significantly better than the sales impact that we saw immediately after the publicity took place. "

Prior to the July incident, the China division was on a growth path, and Schmitt expects that to return once the impact of the bad publicity fades.

Spend money to grow
Despite Yum's troubles in China, Novak sees the market as holding growth potential. He also believes the company has a proven business model that allows it to use focused expenditures to accelerate expansion. Novak said Yum's investment in building a supply chain, creating infrastructure, and generally building operating capability gives it a powerful base for the future.

Novak believes that the company has the opportunity to see a huge return on any investment it makes in China. By increasing its spending on infrastructure, he said he believes the company can return up to four times the cash it invests  on an annual basis. "We're returning great shareholder value," he added.

In the rest of the world, the CEO believes similar investments are needed, including company-owned locations to prove the business model in countries where Yum! Brands has not operated previously.