What would you consider a good dividend growth rate? 5%, 10%, 20% annually? If that's the case, then I hope you're sitting down for this one. Since 2010, Potash Corp of Saskatchewan (NYSE:POT) has grown its dividend at an annual rate of 84%. For just about all investors out there, that number sounds too good to be true -- so much so that it should raise some skepticism as to whether or not the company can actually continue to deliver such a lofty promise to shareholders. After all, the fertilizer business is a cyclical commodity. Let's take a look at why the company has been able to raise its dividend and whether the company can keep paying its industry-leading 4.1% dividend yield.

Something big better be brewing
If you've followed Potash's big rise in its dividend, then you'll probably have noticed that the rise hasn't exactly been running alongside a big bump in net income.

It would appear that in just a four-year period, the company has gone from an ultra-conservative dividend policy, where it pays out less than 10% of its earnings in dividends, to one that pays well over 80% of total earnings. For an investor looking for some dividend safety, this might ring some alarm bells. Potash Corp is in the fertilizer business, and that means it's subject to the swings of commodity prices. This was on full display this year when the world's largest producer of potash -- lowercase means the fertilizer, not the company -- Uralkali, ended a trading agreement with Belaruskali that caused both to increase supply and send the price for potash tumbling 25%. With the chances for potash and its other fertilizer products also at risk for a price drop, a company with a payout ratio that high seems to be living on the edge, or it suggests the company has something in mind that should make that dividend payment look much safer again.

Follow the cash
If those numbers started to give you a panic attack, here are a few things you should consider before doing anything hasty with shares of Potash Corp. First, dividends are paid with cash, not earnings. If we look at the cash situation with the company, it looks better than those earnings numbers suggest.

Despite the huge run-up in dividend payments, the company has still been able to maintain a positive cash flow position. Much of that excess cash over the years has gone to trimming the debt profile, which stands today at a healthy debt-to-capital ratio of 27.7% and an EBITDA-to-interest-expense ratio of 16.9 times, both top marks in the industry.

Another thing to consider, here, is that the company has been going through a major expansion program that has resulted in rather high capital expenditures for the past five years. Potash's management expects these expenditures to reduce even further as its new potash mine and other expansion programs come online. 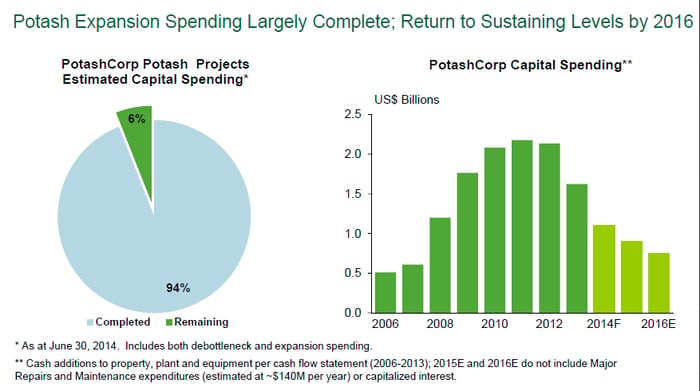 As these capital spending obligations wind down even further, it should free up more of that excess cash to ensure that Potash's dividend remains relatively safe and gives it even more room for growth in the future.

Is the growth sustainable?
The chances of Potash Corp repeating its spectacular dividend growth rate these past few years is slim to none. While the long-term demand for chemical-based fertilizer such as potash, phosphate, and ammonium nitrate looks like it will be strong for many years to come, it won't grow that fast, and Potash Corp is going to be subject to the volatility of commodity prices. That being said, the company is winding down a major capital program and expanding production in almost all of its business segments. These two elements should free up loads of additional free cash that will go a long way in shoring up the company's cash balance and potentially leading to continued dividend growth for years to come.

Is Potash Corp. of Saskatchewan Overpromising on Its Dividend? @themotleyfool #stocks $POT Next Article
Current