One of the most compelling stories in retail over the past few years has been Conn's (NASDAQ:CONN), a seller of consumer electronics, appliances, and furniture. From the beginning of 2011 to the end of 2013, Conn's share price rose by over 1,500%, driven by both robust double-digit comparable-store sales growth and margins that were the envy of the industry. 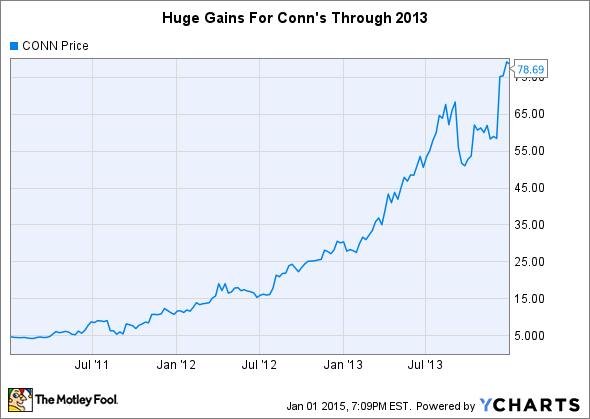 Conn's secret sauce: an in-house financing program that allowed the company to make money not only by selling merchandise, but also by lending to its customers. Most retailers outsource financing to third parties, which typically only lend to customers with prime credit scores. Conn's specifically targets those with credit scores between 550 and 650 for its in-house financing, allowing the company to serve a population unable to finance purchases at other retailers.

Everything fell apart for Conn's in 2014. The stock cratered, falling 75%, as comparable-store sales growth slowed and margins collapsed. In the third quarter, comparable-store sales actually declined by 1%, a stark shift from the 26.5% growth in 2013, and a huge charge related to Conn's credit business wiped out nearly all of the company's operating profit. 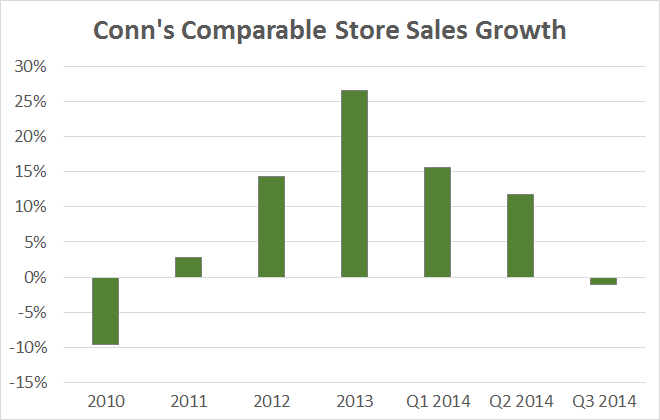 What happened? How does a retailer experiencing such amazing growth suddenly fall apart? As it turns out, there was a huge red flag warning investors of impending doom as early as 2012, and those who caught it were likely unswayed by the impressive growth Conn's was reporting. The story of Conn's rise and fall offers an important lesson to investors, one that can be used to spot problems at any company with a credit business.

Fast and loose
Back in 2010, Conn's was struggling. Comparable-store sales were declining, operating margins were in the low-single digits, and revenue had been declining for the past couple of years. Conn's has long operated its in-house credit business, and it managed to navigate the financial crisis without ever posting an operating loss, an impressive feat given the low credit scores of its customers.

In 2010, around 60% of Conn's retail sales were financed through the in-house financing program, and the weighted-average credit score of loans originated in that year was 624. What was the driver behind the massive growth Conn's experienced over the next few years? Here's a hint: 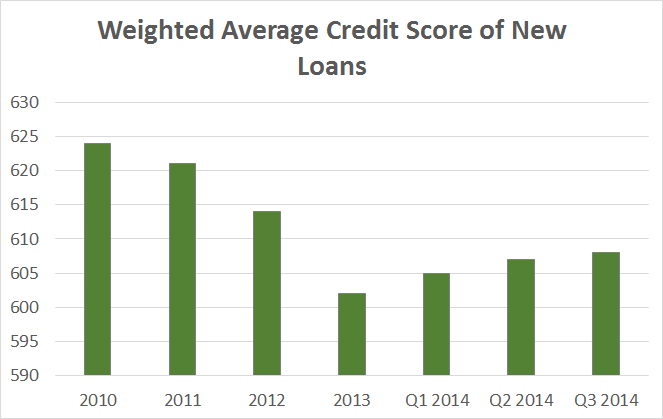 Conn's began lowering its lending standards, with the average credit score of new loans falling to a low of 602 in 2013, coinciding, not coincidentally, with incredible sales growth. What's more, the percentage of sales financed through Conn's in-house financing program rose to 77% in 2013, significantly higher than in the past. In 2014, Conn's began tightening its lending standards as things began to unravel, and the result has been a predictable decline in sales growth.

These falling credit scores aren't necessarily a red flag on their own, although this development certainly should have been concerning for investors well before 2014. The real problem was this: While Conn's was lowering its lending standards, it was subsequently setting aside less money for expected loan losses. To fully grasp what this means, let's look at how these loans were accounted for on Conn's balance sheet.

Financial shenanigans
If you've ever read Howard Schilit's excellent book Financial Shenanigans, you likely already see the problem with what Conn's was doing.

When Conn's makes a sale using in-house financing, a receivable for this loan is created on the balance sheet. This is money Conn's expects to receive in the future; revenue is still recorded on the income statement, even though only a small down payment was received.

As customers make payments on these loans, the receivable balance is reduced, and the cash balance is increased to reflect the influx of cash. What happens if customers fail to pay back their loans? Well, accounting rules dictate that an allowance must be maintained to reflect the loans the company expects to become uncollectible. This allowance reduces the total value of receivables on the balance sheet.

As Conn's loosened its lending standards, this percentage should have been growing in order to compensate for the additional risk Conn's was taking. This is what happened in 2011, when the average credit score of new loans dipped by a few points. But 2012 and 2013 were a completely different story: 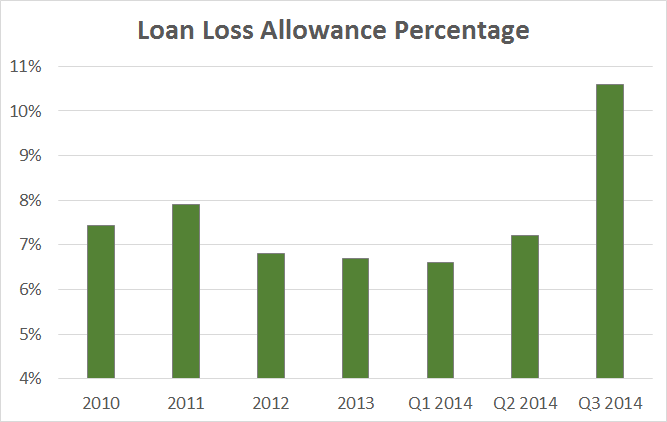 Conn's was setting aside less for loan losses despite the fact that its portfolio was becoming significantly more risky. Why does this matter? Because it means Conn's was recording smaller charges on the income statement than it likely should have been, and that led to an inflated profit.

This practice caught up with Conn's in 2014, and the company took a big charge in the third quarter to bring this percentage up to 10.6%, wiping out most of the operating profit. Given how much the credit portfolio has deteriorated, this may not even be high enough.

Going forward, Conn's has a problem. It can't drive growth while tightening lending standards at the same time, so the days of rapid comparable-store sales growth are likely over, and in fact, sales declines may be inevitable given the kind of credit-fueled growth experienced during the past few years. The credit business could get much worse before it gets better, depending on the rate that these risky borrowers default on their loans. So far, this rate is significantly higher for loans made in the last couple of years compared to those made in the past.

The lesson
The problems that Conn's currently faces were predictable, and the same kind of analysis I've done above can be applied to any company that has a credit business. The key thing to watch is loan loss allowance as a percentage of the total loan portfolio. If this percentage starts to decline, there's a decent chance something is amiss.

In Conn's case, the combination of this percentage declining and the deterioration of the quality of new loans acted as a big, flashing warning sign to anyone who looked deeply enough into Conn's finances. Before investing in any company that makes loans like Conn's, checking that the loan loss reserves are in order is a critical step.

Conn's announced that it is exploring strategic alternatives in October, and earlier in 2014, various class action lawsuits were launched claiming that Conn's defrauded investors by misrepresenting the health of the credit business. One of the suits points out that the bonuses of the CEO and COO were tied to the operating income of the company, and in 2013, they very nearly maxed out those bonuses. A great way to give a boost to the operating income is to keep that loan loss allowance artificially low.

Whether there was fraud involved will be up to the courts to decide. But I wouldn't be surprised if the next edition of Financial Shenanigans uses Conn's as an example.