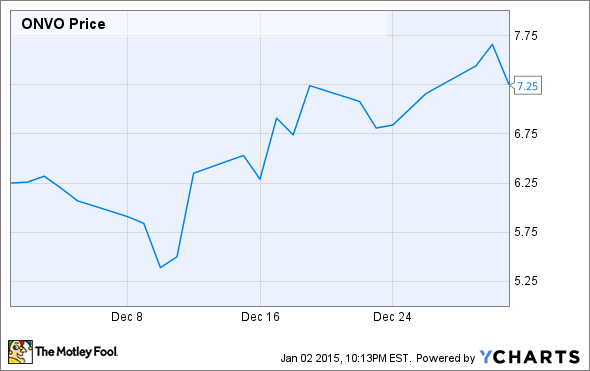 What: Shares of Organovo Holdings (NASDAQ:ONVO), a tissue engineering company focused on providing functional human tissue models and solutions to aid in the drug discovery process, rocketed higher by 15% in December, based on data from S&P Capital IQ, following an appearance by its CEO on CNBC.

So what: To be clear, there are a number of catalysts which may have played a role in Organovo's ascent in December, including the official launch of its 3-D liver assay model known as exVive3D in mid-November. Having tangible and potentially recurring revenue streaming in is the first step toward Organovo being taken seriously as a viable long-term business.

Also, Organovo announced a collaboration with the Yale School of Medicine, Department of Surgery in early December to develop bioprinted tissues for surgical transplantation. The studies are being funded by the Methuselah Foundation, meaning more potentially free positive press for Organovo.

However, I suspect the real catalyst for Organovo's incredible month were comments made by CEO Keith Murphy on CNBCs Fast Money program. Murphy noted that he wouldn't be opposed to selling Organovo, sparking a wave of rumors and emotions that Organovo may be bought out. Now what: Organovo truly does offer an exciting technology capable of transforming the drug development process, ultimately reducing the time it may take to bring drugs to pharmacy shelves and perhaps even saving pharmaceutical companies money in the process. Of course, it's also going to be years before we're able to see tangible evidence of whether or not it can execute on this strategy. We're just a month into the release of exVive3D, and while the product has been well-received, I'd like to see how well Organovo is doing from a financial perspective two years down the road once it's had time to mature.

In the meantime, investors should be ready for moments of disappointment, such as Organovo's 8-K SEC filing at the end of December allowing it to sell up to $33 million worth of its common stock on the open market. These dilutive share offerings are probably going to be commonplace with Organovo until it can generate positive cash flow. When will that happens? I believe positive cash flow could still be four or five years away.

If your time horizon is 10-plus years and your risk profile is high then Organovo is certainly worth a look. If you have a low appetite for risk and expect a two-year miracle then Organovo may not be the stock for you.