Yum! Brands needs to work on winning back customers in China. Photo: Robert Ennals via Flickr

Yum! Brands' (NYSE:YUM) mission in 2015 has to include repairing its reputation in China. With its stature in its largest market tarnished by yet another food quality scandal last year, the owner of KFC, Pizza Hut, and Taco Bell has to make it Job No. 1 to get its good name back.

In its most recently reported quarter, Yum! said its China Division system sales declined 9%, with a 14% same-store sales decline offsetting 6% unit growth. Operating profit for the China Division decreased 38% in Q3. This followed an undercover report televised in China on July 20 that showed improper food handling practices by a food company that supplied Yum! and other restaurants.

The stock market apparently thinks the stumble is only temporary, because Yum!'s shares only lost 1.5% across all of 2014. But the restaurant operator likely has a much more difficult road to travel this year as there are only so many times a company can go to the well of goodwill before it runs dry.

In 2012, Yum! suppliers were implicated in a different scandal, of giving chickens unapproved levels of antibiotics and a drug used to treat Parkinson's disease that's banned for use in food. Then Yum! ran into a PR disaster when it was revealed ice cubes it served at some stores were allegedly dirtier than toilet water. The impact was swift and unrelenting: Its customers flew the coop.

Fortunately, Yum! owns some of the best-known restaurant brands in the world, giving it a good foundation to build on. Here's the good, the bad, and the ugly investors should consider before putting their money in Yum! Brands.

The good
As the third-largest international fast-food brand behind Subway and McDonald's in terms of number of restaurants, Yum! Brands can capitalize on several factors in its favor.

KFC was hurt most by the latest Chinese food quality scandal, but fortunately has little real global competition. Where Yum!'s Pizza Hut has to contend with the growing global presence of rival Domino's Pizza(NYSE:DPZ), there's no one with the scope and scale of the fried chicken joint's 4,600 restaurants in China.

And China's economy is still expanding. Despite the problems there it will remain Yum! Brands' most important market and in the third quarter accounted for 53% of revenues and more than a third of its operating profits. 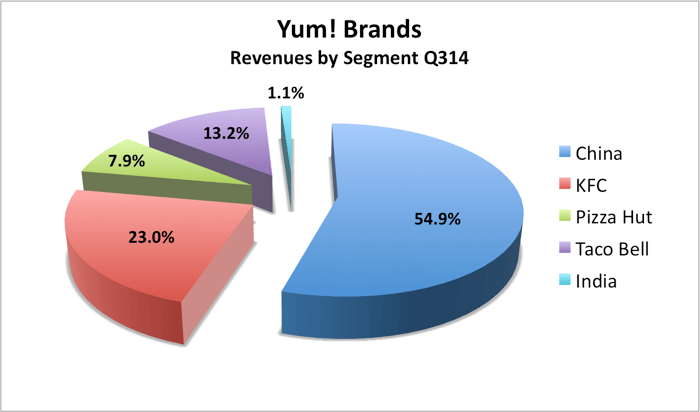 For all its troubles, the restaurant operator still produces generous free cash flow, or $1.2 billion worth over the last 12 months. Analysts expect per-share earnings to grow over the next five years at a rate that's 3.5 times faster than it achieved over the last five years.

The bad
Not only did Yum! Brands' stock not go anywhere in 2014, food quality scandals have kept shares largely flat for the past two years. The recurring nature of the scandals speaks to larger problems that may limit Yum from reaching its full potential.

Chinese consumers are leery of local suppliers for many products, turning instead to U.S. and international companies for their perceived safety and quality. By using the same local sources the Chinese are shunning, Yum! Brands risks consumers holding its brands in the same light.

Even so, it hasn't hurt its valuation. Yum!'s stock currently trades at 20 times earnings estimates, which is only slightly discounted to other fast-food chains like Chipotle Mexican Grill(NYSE:CMG), Domino's, and Wendy's(NASDAQ:WEN). But it's still not particularly cheap and the markets haven't given investors much of a bargain to jump in with.

Part of that may be due to the spinoff effect. Some analysts think the scandal gives Yum! a reason to "de-risk" its operation and spin off its China unit, while others suggest separating the Taco Bell brand would be the better way to return value to shareholders. Both seem unlikely to occur, but they provide investors with a reason to buy in and keep the stock elevated.

The ugly
When Yum! Brands announced its third-quarter numbers in October, it also cut its profit forecast for the full year. It caught some on Wall Street by surprise, though for those who were paying attention it was easy to see projections for a quick recovery were unrealistic. The latest guidance of mid-single-digit earnings growth represents a significantly lower forecast than the 20% growth it forecast back in July, showing the problem is deeper than originally believed.

Meanwhile, India is an emerging growth market for Yum! Brands, but it's not without problems. Revenues were up 14% last quarter, but that was only due to opening more restaurants. Same-store sales were actually down 4%, a downward trend it's witnessed since the beginning, meaning the more it invests in the region, the less it gets out of it. 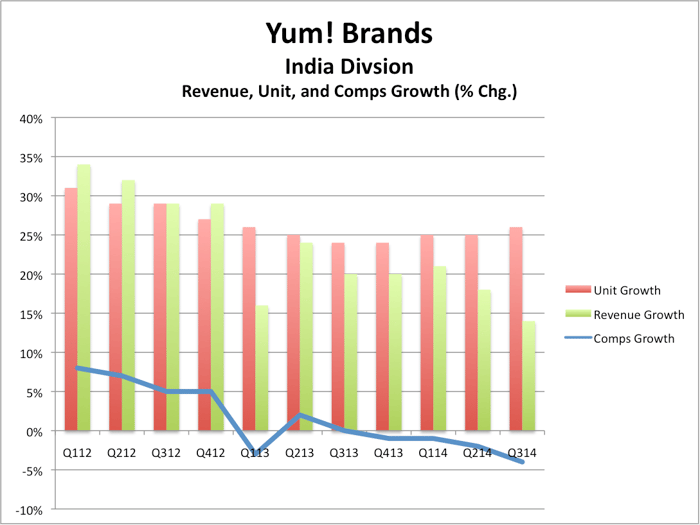 Push back from the buffet?
It would have been better for investors looking for a chance to buy in had the stock received a much bigger haircut, and I wouldn't be a buyer of Yum! Brands stock at these levels. Getting the latest food scandal far enough in the rear view mirror is still a top priority and until then it's true value will be difficult to appropriately measure.

Considering its growth prospects, Yum! Brands look fairly valued, but that's only if it can straighten itself out in China and doesn't succumb to further crises.