Readers of my columns know that I hopped on board the InvenSense (NYSE:INVN) bandwagon several months ago. Since then, the company had a less-than-stellar earnings report and issued disappointing guidance, leading to a pretty substantial drop in the share price. The shares appeared to bottom in early December and had been marching steadily upwards for the last month or so.

However, over the last several trading sessions, InvenSense shares moved down quite violently even as chip stocks as a whole have done well. I think I know why the shares have been moving down, and I think that the fears driving the stock down are far overstated.

Wow, look at all of those lawsuits being filed

After seeing InvenSense stock move sharply downward, I decided to check out the Yahoo! Finance ticker feeds to see if any material news had hit to lead to the sharp decline. I'm sure many readers did the same, and were probably shocked to find the following: 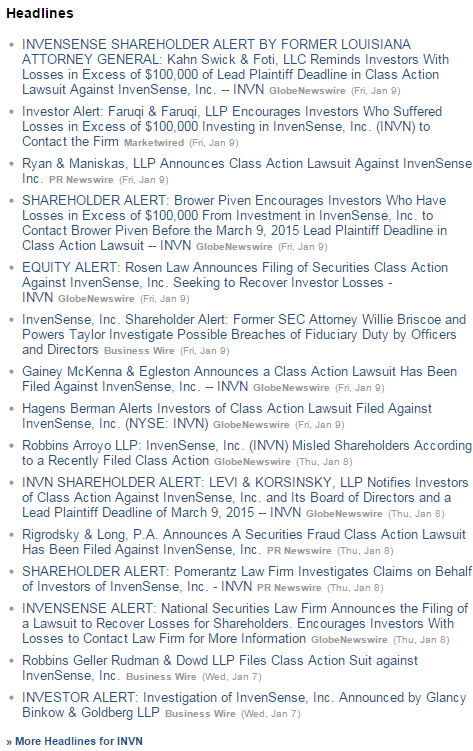 Yikes! There are a lot of law firms apparently filing class action lawsuits against InvenSense. Of course, nobody likes to see that a company whose stock they own get sued, especially for scary sounding things like "breaches of fiduciary duty" and for having "misled shareholders."

Now, I'm going to pick one of these headlines -- I'm going with law firm Tripp Levy's but feel free to open and read any of the others -- and examine it here to see what these law firms are alleging InvenSense did wrong.

What's the problem?
According to law firm Tripp Levy in its press release, here's what is alleged:

The complaint alleges that defendants concealed the adverse effects the Company would experience as a result of its agreement with Apple to supply sensors for the iPhone 6 and iPhone 6 plus at heavily discounted prices. The low prices charged had negatively affected, and would continue to negatively impact, the Company's margins. Instead of revealing the Company's true financial condition and prospects, defendants concealed these adverse facts from investors and chose to issue strong guidance. As a result of defendants' false and misleading statements and/or omissions, InvenSense common stock traded at artificially inflated prices during the Class Period, reaching a high of $25.85 per share, allowing certain of the Company's insiders to sell their personally held stock at artificially inflated prices for aggregate proceeds of over $5.3 million.

From what I gather, this suit isn't going after InvenSense for the one-time inventory writedown that it suffered in the most recent quarter, which hurt gross margins by about 8 percentage points. Such writedowns, while unfortunate and damaging to investor confidence, happen from time to time and I can't think of a case where a company has been successfully sued for poor inventory management.

What this suit seems to be going after, though, is the other factor that led to lower-than-expected gross profit margin percentage: the Apple (NASDAQ:AAPL)/Samsung (NASDAQOTH: SSNLF) driven margin erosion. In particular, InvenSense reported at its Oct. 28 earnings that gross profit margins declined by five percentage points due to "a shift in revenue mix toward lower margin, high volume customers."

Does this complaint have merit?
I am not a lawyer, but I'm not convinced that this complaint has merit. As I noted in an article published in November, management clearly pointed out that gross margins at "some of [InvenSense's] top tier customers" would remain under pressure. This was due to "high volume prices" (i.e. lower prices) and "lower initial manufacturing yields as [InvenSense] ramps new products into production.

As I wrote back in November, investors shouldn't have been surprised that Apple/Samsung margins are lower than sales to other vendors. However, management did claim that it believed that other factors would offset the Apple/Samsung-induced margin pressure. It's clear that those ultimately didn't play out as hoped.

What didn't play out, exactly?
InvenSense noted on its most recent call that its "yielded manufacturing cost, especially for [its] newer products, were higher than expected." This was responsible for a decline of two gross margin percentage points in the quarter relative to the original guidance. What about the other three percent?

Well, InvenSense on its first quarter call claimed that for the second quarter of fiscal 2015, InvenSense would see a non-GAAP gross profit margin "that is in a range around 50%."

Management didn't say "exactly 50%" -- it said "in a range around." Typically when a company gives guidance for just about any number, it's usually a midpoint. The poor yields explain two percentage points of the missing five percent, and the remaining three percent might be explained by a variety of factors. It could be something as simple as Samsung/Apple dominated more of its mix than expected, or "death by a thousand cuts" where a lot of little things combined to knock a few points off of the actual gross margin percentage.

These lawsuit only hurts investors
These lawsuits, in my personal opinion, only serve to scare and to harm investors. If InvenSense the company has to incur significant legal fees to fight these suits, then that ultimately hurts current shareholders. Further, the shareholders who bought stock within the periods specified by the lawsuit, after all is said and done, won't get much, if anything at all.

As an InvenSense stockholder, I would much prefer that InvenSense focus on running its business and making good by its long-term shareholders that way, than to have to focus on these lawsuits.

That said, I don't think these lawsuits will ultimately go anywhere and as a result, I'm not expecting any material change to the company's fundamentals as a result of them. And, to Foolish investors, it's the fundamentals that count.