Apparently it is cool to be positive again. After a long and deep recession, the U.S. economy is finally growing at a healthy clip. And when one compares domestic 4.5%+ GDP growth over the last two quarters against the economies of other developed nations -- primarily in the eurozone -- our recovery looks even better.

Madison Avenue has apparently also gotten the memo and has changed its approach to advertising. While many companies are still mindful to note that large numbers of Americans continue to struggle, some companies have returned to a more-positive message of hope, love, and happiness. Led by McDonald's (NYSE:MCD) new "lovin' beats hatin'" campaign and now Coca-Cola's (NYSE:KO) upcoming "Make it Happy" spots -- which promotes positivity on the internet and in real life -- TV viewers can expect a virtual lovefest going forward.

However, for these two companies, this advertising approach also has a shrouded message: "Ignore the negativity ... especially when it comes to us."

Can the companies turn a negative into a positive?
Both companies lately have faced their fair share of negative press. And they have struggled as U.S. consumers become more health conscious and cut back on high-fat and high-sugar foods and artificial ingredients.

Initially, McDonald's and Coke were able to alleviate investor concerns via international growth. However, much as they do at home, the two companies now face considerable headwinds in foreign markets. Over the last five years, each has underperformed the S&P 500 Index as they haven't fully addressed these concerns. For a visual representation, see the chart below. 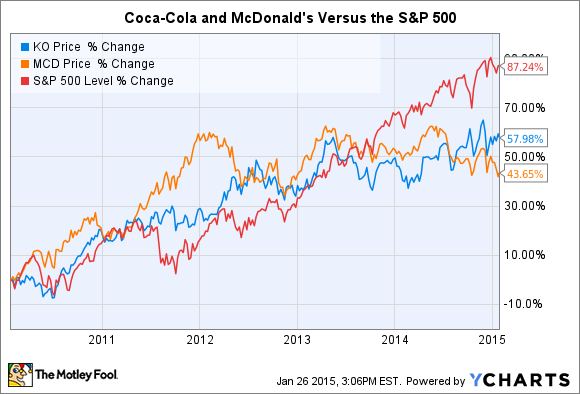 Telling consumers to ignore the negativity is akin to putting one's finger in a dike -- even if it works for a while, it's not a long-term fix. Ultimately, both companies will need to adequately address health and nutritional concerns about their products. And even if they address these issues quickly, there's no guarantee consumers will quickly notice.

Effective marketing could make these efforts harder
That's not to say they have not attempted to address nutritional concerns. McDonald's has added salads and grilled wraps to its menu, while Coca-Cola has introduced Coca-Cola Life using natural Stevia to lower its calorie count while eliminating artificial sweeteners. However, none of these products has been a game changer that changed the trajectory of these companies.

In a bout of irony, decades of effective marketing might actually undermine McDonald's and Coca-Cola's attempts address these concerns. After years of brilliantly placed commercials, most consumers still associate McDonald's primarily with Big Macs, supersized fries, and Chicken McNuggets -- but consumers' affinity for those products has waned. And after years of providing a brand and taste so distinct that fans revolted against any changes (see: New Coke), Coca-Cola finds itself unprepared to face declining demand for its signature product.

In the end, commercials imploring the public to be nicer will probably be less effective than working on the long-term issues facing Coca-Cola and McDonald's. While I'm sure most shareholders would prefer a happier world, I think they'd settle for a better-performing investment.