It's been a painful six months for oil services giants Halliburton (NYSE:HAL), Baker Hughes (NYSE:BHI), and Schlumberger (NYSE:SLB) as oil prices have collapsed to their lowest level in six years. 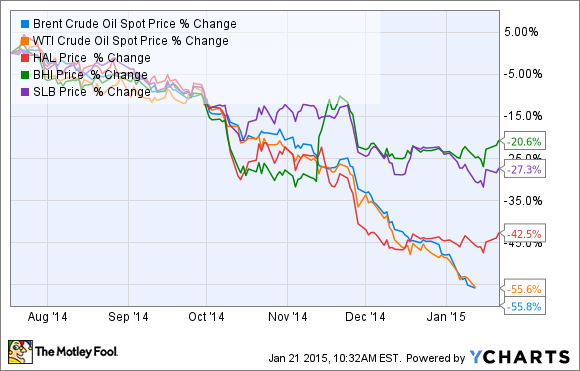 Not all is doom and gloom in the oil services business, though. In my opinion, Halliburton's plan to acquire Baker Hughes for $34.6 billion in cash and stock creates an enormous opportunity for growth investors to pick up shares of Halliburton, one of America's best, undervalued energy blue chips just as it positions itself for immense potential future profit, sales, and dividend growth.

As this table illustrates, Halliburton's and Baker Hughes' net margins are below those of Schlumberger, which is the world's largest oil services provider and has the economies of scale to create some of the best profitability in the industry. While its true that Schlumberger's greater presence in international markets and higher margin drilling activities account for some of this difference, I think that the larger Halliburton might be poised to challenge Schlumberger in these key areas. Schlumberger's superior profit margin maybe partially why the market values Schlumberger at a premium to Halliburton and Baker Hughes in terms of its enterprise value-to-EBITDA, or earnings before interest, taxes, depreciation, and amortization, ratio. That is something this merger is meant to correct.

That's because management at Halliburton and Baker Hughes believe they can achieve $2 billion in annual synergistic cost savings once the two companies are completely integrated by the end of 2017. 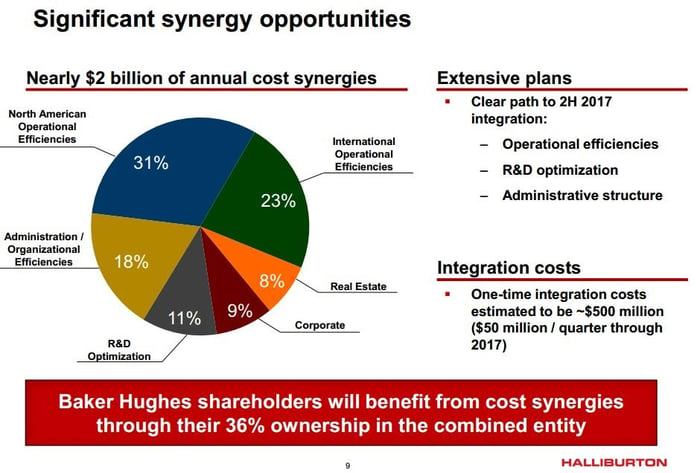 The new Halliburton is expected to have at least $48 billion in annual revenue, and possibly much more. This could make it the new global king of oil services providers and give it increased pricing power with both customers and suppliers when oil prices eventually recover. Halliburton thus might achieve much a much greater net margin, potentially surpassing Schlumberger's, which could mean a much higher valuation multiple. That alone would set the stage for potentially massive share price appreciation, even accounting for the 515 million new Halliburton shares created by the merger.

On top of all that, the new Halliburton would increase its free cash flow by at least 34% from today's level, setting the stage for potentially impressive dividend growth. Halliburton has already doubled its dividend over the last two years. I think this merger, with its opportunity to improve profitability and long-term sales, could help the company surpass the five-year 10.2% dividend growth Wall Street predicted for Halliburton prior to the merger announcement.Combined with the potential multiple expansion that could come with greatly improved profitability, I think Halliburton represents one of the best long-term growth companies you can buy in the oil sector today.

Risks to consider
There are two risks current and prospective Halliburton shareholders should understand. The first is as obvious and potentially destructive as a drunken, angry bull in a china shop -- cheap oil prices persisting longer than most analysts expect.

During its most recent earnings report, Halliburton warned of a bleak outlook for 2015 and announced 1,000 layoffs. During the conference call, Halliburton CEO Dave Lesar said the company's major customers are pulling back spending by 25%-30% over the next year. Should oil prices remain low for several years, the company will almost surely survive but investors would likely have to settle for much smaller dividend and share price growth.

The second risk factor is that--should the deal fall through for either regulatory reasons or if shareholders vote down the merger--Halliburton would be saddled with a $3.5 billion transaction termination fee. Given that Halliburton's net income in the past 12 months was $3.4 billion, and earnings might very well decline this year due to plunging demand for oil services, such a hit to the bottom line might crash the share price.

The takeaway: merger creates immense profit opportunities for undervalued Halliburton
With shares down over 40% in the last six months, Halliburton seems incredibly undervalued. The merger with Baker Hughes, with its enormous potential for economies of scale and synergistic cost savings, could send long-term margins, valuation multiples, and dividends soaring. While there are always risks associated with investing in a cyclical industry such as oil and gas, I think investors should consider Halliburton for a spot in their portfolios.