The gambling supply business isn't as hot as it used to be.

The gambling business has experienced a wild 12-month roller coaster ride, but the game supply business has been nothing but downhill.

International Game Technology (IGT -0.04%) reported another large decline in revenue and profits. In fact, IGT's fiscal first quarter revenue fell 17% to $450.6 million and net income dropped 56% to $35 million. Over the last two years, revenue has fallen steadily and net income has fallen off a cliff, as you can see below (fiscal Q1 not included in this chart). 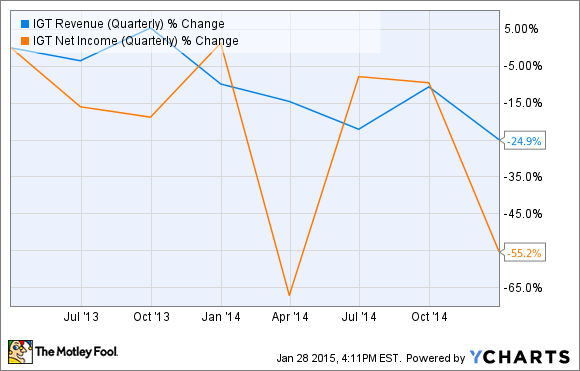 So what caused the drastic drop in revenue?

Build or bust
Well, when a casino is built, it orders hundreds of slot machines to fill its floors. So, when regional gaming expanded after the recession and Macau was building casinos like crazy, the market for games was strong. But in the last two years, IGT has basically gone into a replacement cycle, and there aren't recurring revenues year after year. This sluggish market for gambling machines has driven IGT's drop in revenue.

What's more troubling for investors, however, is that there's not really a building boom on the horizon. Although Macau is building another six casinos, they'll rely heavily on table games, not slot machines, for gaming revenue.

Over the last few years, Bally Technologies, SHFL Entertainment, and WM Industries were acquired by Scientific Games Corporation (LNW -0.69%) to make the world's largest game supplier with a very diverse customer base. GTECH Holdings is also merging with IGT in a $6.4 billion deal, which will make another diverse competitor.

Despite these mergers, these companies are still seeing major revenue declines because gambling isn't expanding as quickly as it was a few years ago. With lagging growth, there's really only one major savior for the industry.

Is online gaming ever going to change the game?
One of the drivers of consolidation in gaming was the potential emergence of online gambling. The online gambling business, at least in the U.S., is currently being built similar to a casino. The online games themselves will need to be approved by regulators and then a casino can use an approved game for their online casino. Each casino won't just build its own software.

This setup gives game makers an opportunity to gain market share with a small number of players. Since both Scientific Games and IGT have been approved for an online gaming license in Nevada, as well as other social and online revenues, they'll have a head start in the market.

But online gaming isn't any closer to being passed nationally than it was five years ago and with traditional slot game sales struggling I don't think investors should be betting on casino suppliers. The odds are with the companies that own the casino, and right now I don't see that changing any time soon.