McDonald's (NYSE:MCD) recently reported its fifth straight quarter of falling same-restaurant sales, marking the first time in 30 years U.S. net sales have not grown from the year before. The company last week also announced CEO Donald Thompson would be retiring after just two years on the job.

While many believe McDonald's lagging sales are a sign of how deeply the fast-casual dining trend is cutting into its business, that might not really be the case. If it was, Burger King Worldwide (NYSE:BKW.DL) and Wendy's (NASDAQ:WEN) would also be reeling from the impact. But the chart below shows that is not happening.

One need only look at how quarterly comparable-restaurant sales stack up at the big three fast-food burger stops to see Chipotle Mexican Grill (NYSE:CMG) and other fast-casual joints, including a new wave of more upscale burger chains, are not the only cause of all McDonald's ills. If they were, all the fast-food places in my chart would have suffered in equal measure. 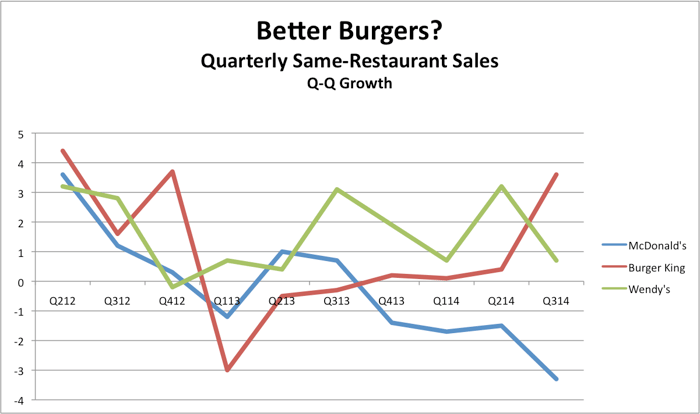 Better burgers only go so far
The rise of fast-casual restaurants, with their healthier menus and fresher ingredients, certainly plays a role in how much business McDonald's is losing. The proliferation of better-burger chains such as Five Guys, The Habit, and Shake Shack also cuts into sales by siphoning off millennial consumers who can afford to go upmarket for their burgers.

But it's not the whole story. The Golden Arches' problems are ones of its own creation:

Not playing to its base
McDonald's core customer skews toward lower- and moderate-income families that, since the recession, have been buffeted by job losses and wage stagnation. They choose McDonald's not because of healthy food options or taste (OK, maybe the french fries), but rather for convenience and price.

Instead of gearing its new products toward those customers, McDonald's prefers to chase after the millennial consumer with McWraps, oatmeal, fruit, lattes, and salads. But, according to RBC Capital Markets and the NPD Group, restaurant traffic from millennials with high incomes was down 16% at burger chains over the last seven years, suggesting McDonald's is trying to bridge a gap with a customer who is no longer interested in what it's serving.

But that doesn't necessarily mean they're going to Chipotle. Customers may like the personalization possible at the Mexican food chain and the fresher, healthier ingredients, but you don't just give up burgers for burrito bowls.

A quarter of McDonald's sales comes from its breakfast menu where it owns an estimated 31% share of the market. Chipotle doesn't serve breakfast. The burger chain also generates a whopping 70% of its sales from its drive-thru window. Chipotle doesn't have one of those, either. And where McDonald's has a busy menu, Chipotle keeps it's own focused on a few simple dishes.

In short, the Chipotle customer isn't one that's migrated away from McDonald's.

A menu that is expanded well beyond just burgers and fries sometimes confuses customers and slows sales.

Menu changes not working
As much as McDonald's says it's committed to streamlining an unwieldy menu, its Create Your Taste initiative (the rollout of which is in hurry-up mode) is just another iteration of this mistaken strategy. Giving customers even more choice over what kind of bun to have -- or whether to have one at all -- along with an assortment of fancy new toppings, is working at cross-purposes with its message of simplification.

It is also frustrating McDonald's franchisees who have to foot the bill for every new product introduction, menu change, and store upgrade.They also complain the complicated menu slows service. It was telling that franchisees reportedly were hanging their hopes on McDonald's annual Monopoly game promotion being a big hit because of how bad things had become.

McDonald's domestic problems are also partly due to lack of vision, and thus quite worrisome. Wendy's gave us the pretzel burger and Sonic (NASDAQ:SONC) the French Toaster, a bacon, egg, and cheese sandwich in between two pieces of French toast. McDonald's McGriddle may have come to define the breakfast sandwich today, but it's been a long time since it's offered something as successfully innovative again.

Time to look inward
With a sprawling global empire of 35,000 stores in over 100 countries, the company's operations might have become as unmanageable as its menu, and it could be time for McDonald's to begin thinking closer to home.

The U.S. market accounts for 31% of revenue but 43% of operating profit, so focusing on its core customer and not going off on quixotic campaigns to capture millennials will bring its attention where it needs to be: on its burgers.

There was no reason really for McDonald's CEO to fall on his sword. Change was needed at the restaurant, but not necessarily in the management suite. And while McDonald's might still learn a thing or two from the fast-casual leader, Chipotle Mexican Grill isn't to blame for the burger chain's problems.