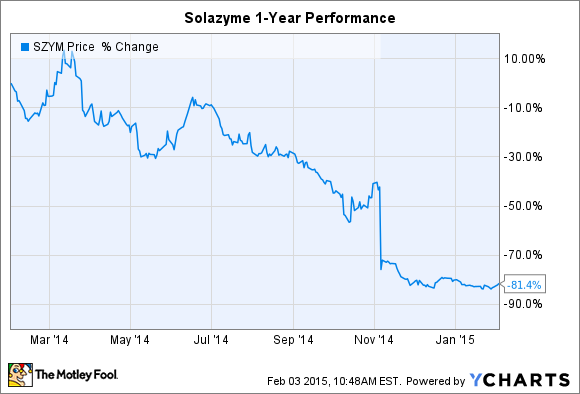 A combination of headwinds, including falling commodity prices, unexpected equipment problems at its largest manufacturing facility, and higher than expected production costs all came to a head during the company's third quarter 2014 earnings conference call. Solazyme pivoted its commercialization strategy -- the roadmap for tracking growth -- and revised 2015 guidance for much less revenue. The result was a one-day loss of 60% as many investors headed for the exits. Tax loss selling at the end of the year didn't help either.

Let's admit it: Investors are in a difficult spot right now. On one hand, Solazyme appears to be "oh so close" to owning a revolutionary renewable oils platform that could lead to years of growth. On the other hand, the number of questions without answers just increased by an order of magnitude. Making an investment decision now sure is complicated, but just as the company pivoted strategies, investors need to revisit what metrics to watch. You can forget about production volumes, revenues, and even whether or not the production facility in Moema, Brazil is operating.

Instead, you should watch the one indicator that makes those listed directly above matter in the first place: market traction.

Why market traction?
It seems obvious, but Solazyme stock will never rebound if its high-margin portfolios fail to achieve market traction. In this case, that means Encapso drilling lubricants for the oil and gas industry and AlgaVia food ingredients. We can exclude the remaining portfolio, Algenist cosmetics, because it provides the bulk of product revenues and is growing sales 20% to 30% every year. In other words, it has already gained a foothold in its respective industry.

Market traction will be an important metric for investors to focus on for several reasons. First, it signals that there is demand for the company's products (something that hasn't been very obvious to date), which means value is being created from using them and, almost certainly, that Solazyme can manufacture products at costs competitive with market incumbents. While it's great to hear about the benefits of Encapso and AlgaVia and read about how many test wells were drilled and product samples were shipped, respectively, the number of "almost customers" isn't a relevant metric for investors in a struggling company.

Exposure in Sephora and other stores has helped Algenist grow handsomely. Similar deals for Encapso or AlgaVia could do the same. Image source: Author.

Second, market traction helps to fill Solazyme's existing 120,000 MT of annual production capacity, which is required before the company invests in growth-driving expansion projects. Although Algenist and Encapso are unlikely to fill existing production capacity, food ingredients have the rare potential to support high gross profit margins (exceeding 50%) and high volumes. That makes yet-to-be-commercialized AlgaVia by far the most important product portfolio for investors in the year (and years) ahead, especially since the company will struggle to profitably manufacture high-volume commodity replacement products any time soon.

Third, Solazyme needs to demonstrate reliable production and supply -- which requires larger volumes of renewable oils -- to attract larger customers to its platform. Large customers won't make the decision to shuffle up a stable supply chain lightly, which makes it imperative that they're confident a new supplier, in this case Solazyme, is capable of stepping up to the plate. But the company will never prove its capabilities if existing production facilities are sitting idle because Encapso and AlgaVia aren't being produced in large volumes because they haven't gained market traction.

How do you gauge market traction?
The simplest way to quantify market traction is through product sales and offtake agreements. And while investors can stop worrying about Algenist, they should also stop hoping for the best for Encapso drilling lubricants, which means the focus should be almost exclusively on AlgaVia food ingredients. Why?

Consider that of the $47 million in expected product revenue in 2015 (based on preliminary guidance provided at the end of the third quarter 2014, which could change), at least $31 million is expected to come from Algenist. That leaves $16 million in slack for the Encapso and AlgaVia.

A lowly $16 million may seem trivial, but it won't come easy. Encapso's potential market opportunity shrinks every time an oil and gas company cuts back on drilling new wells thanks to $50 oil. When falling drilling rig counts are coupled with fierce competition from more established and more integrated oilfield services companies, investors may want to begin lowering their expectations for Encapso in 2015. The company will likely do the same in the upcoming earnings conference call.

Meanwhile, AlgaVia food ingredients have great potential in the marketplace, but investors have yet to see any concrete market traction from commercial customers. So far, only small test samples have been shipped to interested companies. And while there may be hundreds of interested companies, the ingredients have yet to be included in the food products of a major brand. Investors need to see major supply agreements in 2015 to have confidence that Solazyme's new commercialization strategy will work as outlined.

What does it mean for investors?
Gone are the days when investors could focus on production volumes and timelines of Solazyme's commercial scale facilities. They're still important metrics to follow, but they themselves (and many others) are dependent on how quickly Encapso and AlgaVia products gain market traction. It will demonstrate demand, prove the ability to fill existing capacity, and (eventually) justify the need to invest in future expansion. Without it, Solazyme will have a difficult time proving that it is capable of reliable operations, which could handicap the company's efforts to attract larger customers that require large volumes of products.

When the company hosts its full-year 2014 earnings conference call at the end of February, you know what to watch.