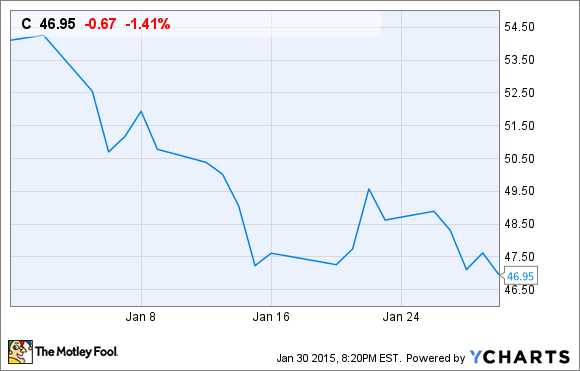 What: Shares of Citigroup (NYSE:C), a global banking and financial services giant, slumped 13% in January, based on data from S&P Capital IQ, following a weaker than expected fourth-quarter earnings report.

So what: For the quarter Citigroup delivered $17.8 billion in revenue, unchanged from the previous year, and earnings per share of $0.06. Comparably this fell short of the $18.6 billion in revenue and $0.09 that Wall Street analysts had been looking for.

Also, markets and securities revenue took a big hit due to global market uncertainty and volatility. The perception that higher volatility should result in beefier profits for market and security operations just isn't holding water with Citi. It also doesn't help that Citigroup removed its hedge against the Swiss franc just a week prior to the Swiss governments' decision to let its currency float against the euro. That move cost Citigroup another $150 million. In other words, it can't win for trying.

Lastly, a majority of Citigroup's revenue comes from overseas markets. Considering that the U.S. dollar is strengthening Citigroup could experience weaker revenue and profits because of foreign currency translation (turning foreign currency back into dollars).

Now what: While some investors would let Citigroup slide on its Q4 miss considering that its hefty losses were based on non-recurring legal fees, I'm not in as forgiving a mood.

My concern relates to Citigroups 7% decline in deposits to $899 billion, or 4% in constant dollar terms, and its 3% drop in loans to $645 billion, or 1% drop in constant dollars. Deposits and loans are the basics by which banks make money. If Citigroup is having difficulty attracting new loans and deposits it's a worrisome sign, and potentially a signal that the banks' image is taking a hit, or that it'll need to be more aggressive with its assets in order to grow its bottom line -- a possibly dangerous scenario either way.

I did find some comfort in Citi's improvement in its net interest margin in an otherwise difficult lending environment, and the banks' 47 basis point reduction in its allowance for loan losses to 2.5%, or $16 billion, from the prior year. However, it's apparent that Citi is light years behind its peers in terms of basic banking industry growth, and I'd opine that you'd likely be better off sticking with a major bank that operates primarily within the U.S. rather than investing in Citigroup.