In the wake of yet another disappointing earnings release last week, Google stock has continued to be shunned by investors as it has for much of the past 12 months. At a time when technology stocks in general have rallied, Google stock has noticeably dipped. 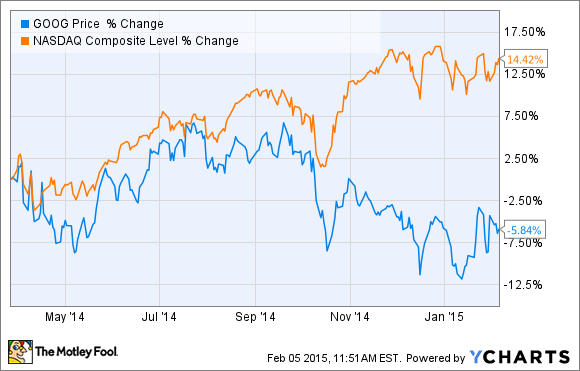 So what's wrong at Google?

For all its recent achievements, and there are many, it's clear Google's greatest blessing has now become something of a curse.

The one chart Google investors should fear
Google's aggressive move into mobile has already proven a seminal moment in its charmed corporate history. In a few short years, Android has transformed Google from a nonfactor in the world of computer operating systems into having the most used computing platform on Earth by a factor of more than two times.

Although Android's rapid rise offers more positives than negatives, its ascent has been accompanied by its fair share of headaches for Google. As you can see below, Android's emergence has had a notably negative effect on what is arguably Google's most important financial metric.

Android ushered in an era of untold ubiquity for Google's search engine and third-party ad networks. Paid clicks, another key metric for Google, have absolutely exploded since the company launched advertisements on Android. However of late, serving so many new ads on much smaller screens has had a deleterious effect on Google's per-ad profitability.

As it did to virtually every business, the Great Recession dragged on Google's core advertising business; fourth-quarter 2009 represented the first quarter in which its cost-per-click began to recover and expand. As you can see in the chart above, things went swimmingly for the better part of two years before Google's cost-per-click growth rate switched from positive and negative, where it has remained ever since.

A trend that's here to say
Many, myself included, have been loath to criticize Google's falling cost-per-click. I'm as guilty as the next guy in writing this dynamic off as temporary, a new phenomenon to which Google will clearly adjust in short order.

However, it has become increasingly clear over the past few years that we're looking at a dynamic more endemic than simply a few short-term headwinds.  Google's per-ad revenue has decreased for 13 consecutive quarters. As I mentioned above, the main culprit behind this trend are smartphones' and tablets' smaller screens, which present a challenge in buoying revenue per-ad for Google. However, there's another key factor at work here that investors need to acknowledge.

Although Google remains easily the most dominant player in digital marketing today, a growing crop of legitimate competitors are taking aim at its advertising empire. Facebook's (NASDAQ:FB) booming ad business represents perhaps the best-known threat to Google, but other competitors are also vying for a piece of this massive emerging market. Twitter and Amazon.com, to name just two, have advertising ambitions that represent very legitimate threats to the world's search leader.

Google is no longer the only show in town for those looking to make the most of their digital ad dollars.

Today's trash, tomorrow's treasure?
There's a case to be made that this is simply unnecessary worrying, and I accept that. Allowing ad rates to drop in the short term in order to consolidate its long-term market share in the new paradigm of mobile certainly makes sense. I get that.

It's the permanence of the trend that worries me. Taking its extended existence into account, this dynamic isn't likely to dissipate anytime soon; that's the alarming part of this scenario. Google's margins remain fine today, but if its top-line growth continues at double the rate of its bottom line, this will eventually result in a future Google in which profitability is a shadow of its now-mighty economic engine.

Google has been called a company capable of lasting 100 years or more. There's certainly some truth to that. However, with Android's potential to drive down margins showing no signs of abating, it's crucial for shareholders today to realize the Google of tomorrow could be much less lucrative than it is today.