Realty Income Corporation (NYSE:O) just joined a very exclusive club of stocks. After a 20-year history as a public company, the real estate investment trust, or REIT, was added to the S&P High Yield Dividend Aristocrats index because of its outstanding history of increasing its dividend. And unlike most stocks in the index, which increase their dividends once per year, Realty Income has increased its payout much more frequently.

Here's an overview of the newest dividend aristocrat, and why it could make an excellent addition to your portfolio.

What Realty Income does

Realty Income owns more than 4,200 commercial properties, which are diversified geographically as well as across a variety of industries.

The majority of these properties are freestanding buildings in prime locations, and most of Realty Income's tenants are large, nationally known retailers. Just to name a few, some of the company's largest tenants are Advance Auto Parts, AMC Theaters, Circle K, Family Dollar, Wal-Mart's Sam's Club, Yum! Brands' Taco Bell, and Walgreen.

So to put it simply, Realty Income buys commercial properties, leases them to high-quality tenants, and then passes the profits generated to its shareholders. And as a REIT, it's required to distribute at least 90% of its income.

Outstanding dividend record
Unlike most of the dividend aristocrats, Realty Income pays its dividend on a monthly basis. It's even known as "the monthly dividend company." 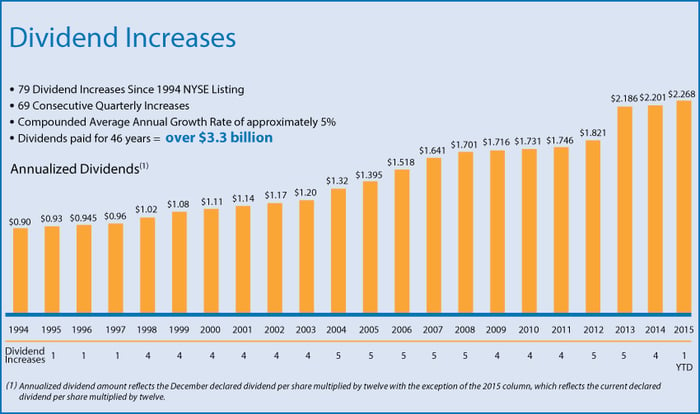 Including the most recent increase, which boosted the dividend yield by 3%, Realty Income has increased its dividend 79 times since it became a publicly traded company in 1994, including 69 consecutive quarterly increases. During that time, the dividend has grown from a total annual rate of $0.90 per share to about $2.27, which is a 4.4% yield at today's price, and I'd be surprised if we didn't see a few more increases this year.

As far as income growth goes, one way the company grows its income is by expanding its portfolio of properties and leasing out those new properties for more than the "cost of capital" to acquire the new properties. For a simplified example, if it costs Realty Income 4% interest to borrow money and the property it buys generates an 8% annual return, the 4% "spread" is the profit that can be paid to shareholders.

The other way Realty Income grows its income is through rent increases, which are typically built into the tenants' lease, and typically range from 0.2% to 2% per year, according to the company.

Commercial properties are valued based on a few factors, but perhaps the most important is the property's ability to generate income. As the amount of rent a building can generate rises, so does its value, which causes the intrinsic value of Realty Income's stock to grow.

High reward with low risk
One reason I prefer commercial real estate to residential is that there's a whole lot less uncertainty involved.

For starters, the lease terms tend to be much longer. While an apartment tenant generally signs a lease for one year or two at the most, commercial tenants sign leases that can last for decades. In fact, Realty Income's typical lease has a timeframe of 10 to 20 years. And as I mentioned before, there are usually annual increases built right into the lease, which means that the company will grow its income no matter what the economy does.

And the tenants are on "net leases," which takes a lot of the uncertainty out of property ownership for the company. Under this type of lease, the tenants are responsible for variable costs such as property taxes, building insurance, and maintenance. All Realty Income has to do is to collect a check.

Although the business model is relatively low-risk, the reward potential is huge, and the proof is in the performance. Since going public, the stock has averaged a 17.1% annual total return, handily beating the S&P 500's 9.7%.

It just went on sale
Coincidentally, as soon as Realty Income was added to the dividend aristocrats, the share price underwent a pullback, mainly caused by speculation of rising interest rates and their potential effect on REITs. In fact, Realty Income's share price has dropped by more than 7% since the end of January. 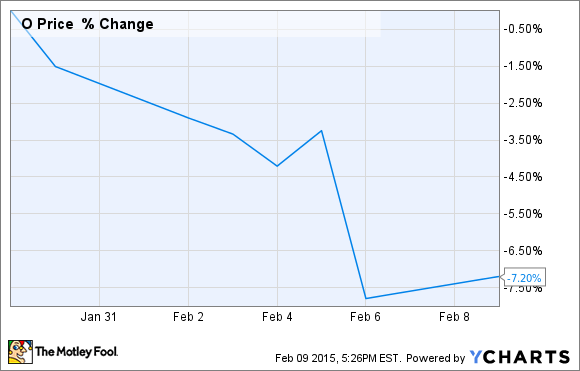 However, after such a stellar performance in 2014 (a total return of more than 33%), a pullback isn't all that surprising. Just bear in mind that Realty Income has thrived in a rising-rate environment before and will do so again. Whatever interest rates do in the coming months and years, Realty Income should deliver excellent performance and income, and I see any pullbacks like this as excellent buying opportunities.