By the looks of it, Apple (NASDAQ:AAPL) seems to be legitimately interested in the electric car market. Speculation has intensified following a series of reports from numerous outlets, suggesting that Apple has already assigned hundreds of engineers on "Project Titan."

But recently, entrepreneur and venture capitalist Jason Calacanis made a bold prediction: that Apple would acquire Tesla for an astounding $75 billion. Better yet, Calacanis expects this mega deal to occur within the next 18 months, even going as far as calling it "a lock" in his mind. Don't get me wrong; with Tesla as my second-largest personal holding, I'd be thrilled if it got bought out at three times the current price.

Hey, small spender
Historically, Apple's monetary ceiling for acquisitions has been in the neighborhood of $500 million. The Mac maker usually targets small companies with negligible revenue and innovative technology that can be integrated into future Apple products. That all changed when Apple shocked investors by acquiring Beats last year for $2.6 billion, or over five times its normal maximum price.

Tesla is a lot of things, but one thing that it's not is a steal. Investors are certainly pricing in high hopes for its disruptive future. A quick look at its valuation metrics relative to other automakers is all it takes.

Apple has never been about big flashy acquisitions, and a $75 billion acquisition of any company is almost 30 times larger than its biggest acquisition. Even at Tesla's current $25 billion market cap, it remains a somewhat speculative investment that's arguably already priced for perfection. And we're talking about Apple buying it for three times the current price in a matter of months.

Analysts are modeling for Tesla to bring in $8.6 billion in revenue in 2016. If Apple theoretically bought the electric carmaker at the end of 2016 (and those estimates prove accurate), it'd be paying 8.7 times sales. Tesla currently has less than $5.5 billion in tangible assets on its balance sheet, so Apple would be forced to record an absurd amount of goodwill and intangible assets if it did a $75 billion deal.

Goodwill hunting
One of the biggest benefits for adopting a conservative acquisition strategy is minimizing the amount of goodwill and intangibles that sit on the balance sheet. This reduces the risk if acquisitions don't work out well. Apple is currently carrying just $9 billion in total goodwill and intangibles, or 3.4% of total assets, with much of that coming from Beats alone. 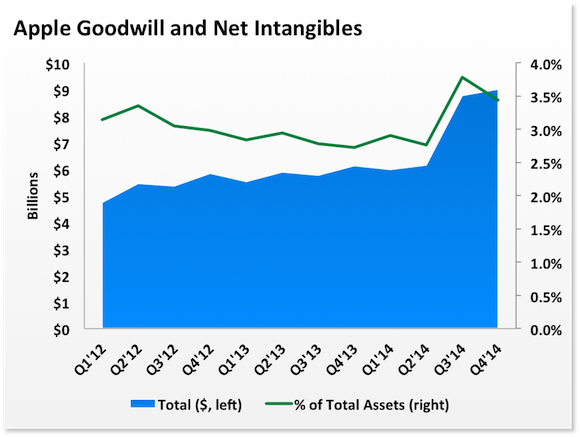 Contrast that with other tech giants for some additional perspective.

A single, massive $75 billion acquisition of Tesla would promptly throw decades of discipline out the window, and expose Apple and its shareholders to considerable risk. It's also not as if Apple could realize a lot of cost-saving synergies. Tesla's operations are very capital intensive since it directly manufactures vehicles, while Apple prefers to utilize contract manufacturers while keeping its supply chain incredibly lean. Most importantly, the two companies play in completely different markets, further minimizing the potential for synergies.

Sorry, Calacanis, but it's not happening.