The inevitable job cuts that come along with a 50% decline in oil prices are starting to hit the U.S. oil market. In the last two months, a quarter of U.S. drilling rigs have been idled and nearly every oil explorer has cut their capital spending plans for 2015. 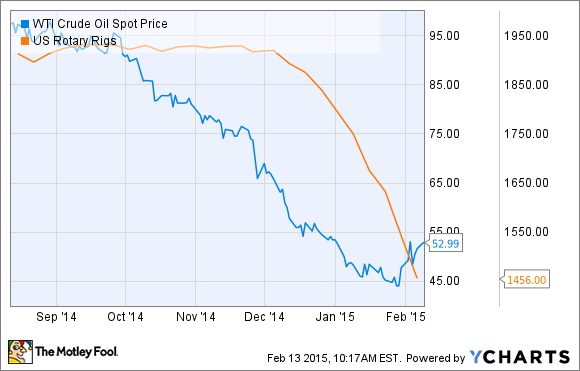 The result has been at least 40,000 announced layoffs in the U.S. and, as Bloomberg recently reported, over 100,000 globally. If oil prices stay low for much longer the U.S. could top 100,000 job losses by the end of the year as companies with exposure to low oil prices cut costs to stay afloat. But the industry may not lose as many jobs as you think because oil production is going to grow for the foreseeable future and lots of people will be needed to get that oil to market.

Fast and furious job losses
For months after oil prices started to fall, oil explorers and service companies kept an optimistic view of the industry. The hope was that oil prices would recover quickly and they could go on with business as usual.

By December, executives started to realize that the price of oil was going lower than anyone expected and could stay down for a long period of time. When rigs started to rapidly go idle in early 2015 the rush to cut labor costs was on. Halliburton (NYSE:HAL), Baker Hughes (NYSE:BHI), Schlumberger (NYSE:SLB), Weatherford International (NYSE:WFT), and Precision Drilling (NYSE:PDS) are just a few that have announced major cuts to their workforce.

What's interesting about the list above is that these are all service providers, providing drilling equipment, technology, and other products to oil explorers and producers. They're the first to take a hit when drilling is cut back, while producers still have work to do extracting oil from wells that have already been drilled and fracking them over and over.

That's why producers like Continental Resources, Whiting Petroleum, and Hess haven't yet begun laying off workers and have actually said they don't plan layoffs in 2015. Big oil companies, which have large exploration businesses, have also been slow to announce job cuts. BP  (NYSE:BP) has said it will cut 1,000 jobs over the next year, but that's just over 1% of its 83,900 employees. Total (NYSE:TOT) has said  it will eliminate 2,000 workers, less than 2% of its workforce, by 2017, something that could easily be done through attrition.

The dynamic among oil producers could change later in the year if oil prices remain near $50 per barrel, but for the time being, layoffs will be fairly limited for oil producers.

What's keeping oil employment high in 2015
The potential impact on the U.S. economy shouldn't be understated. One in 100 jobs  in the U.S. is affected by the energy industry, but most oil companies simply can't rush out to cut their workforce. The reason is the dramatic increase in production over the last five years. You can see below that U.S. crude oil production has nearly doubled over the past decade and workers are needed to frack wells, keep existing wells producing oil efficiently, and move product to refineries. Even if new wells aren't being drilled at a rapid rate this work is still necessary. 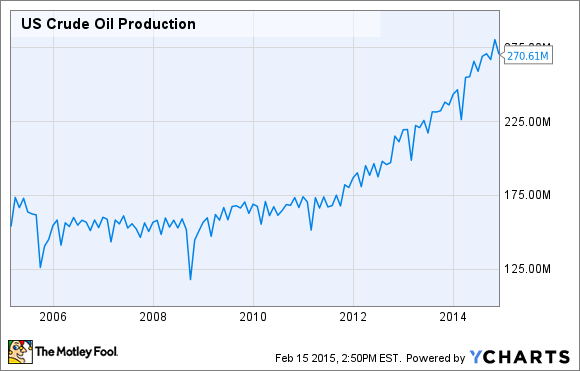 That's why there will be a big difference between the number of layoffs in the drilling services side of the business and production, refining, and distribution, where most industry jobs are today.

Just because employment is high doesn't mean profit will be
What's interesting about the employment picture and investing in oil related companies is the disconnect between jobs and profits. The service providers I listed above are cutting jobs rapidly but each company except Precision Drilling is expected to be profitable this year. This is because they can adapt quickly to contracts and pricing conditions for their services.

Oil producers are in a tougher position with Hess and Whiting Petroleum expected to post big losses and Continental Resources barely expected to maintain a profit. That's because the marginal cost to continue producing oil from existing wells is low enough to make it worthwhile to keep production going even if the well isn't profitable (when including drilling costs).

As an investor, that's one reason I'm sticking with services providers -- which benefit from high oil prices but aren't left with massive losses when prices fall -- over producers themselves.

Perspective on jobs in the energy industry
The reality is that employment in the oil and gas space has about doubled over the last decade, and if oil production falls in the next two years there will continue to be layoffs. But they may not be as fast and furious as some people think because there's a long lag between when a well is drilled and when it stops producing oil.

A cutback in capital spending will affect a number of companies in a big way, as I've shown above, but it won't affect everyone evenly across the board and there are still companies pumping out profits despite the low oil price environment. That's something for investors to keep in mind in energy today.