National grocery store chains Whole Foods (NASDAQ:WFM) and Kroger (NYSE:KR) have given investors plenty to be optimistic about lately. Kroger announced an impressive 6% comparable-store sales gain last quarter. Not only was that one of the industry's highest growth rates, but it also marked Kroger's 44th consecutive quarter of growth by this critical metric.

Whole Foods, after ending its worst comps year since 2009, posted a solid rebound in the first quarter as customer traffic bounced higher. Both stocks have responded to the good news by hitting new highs. 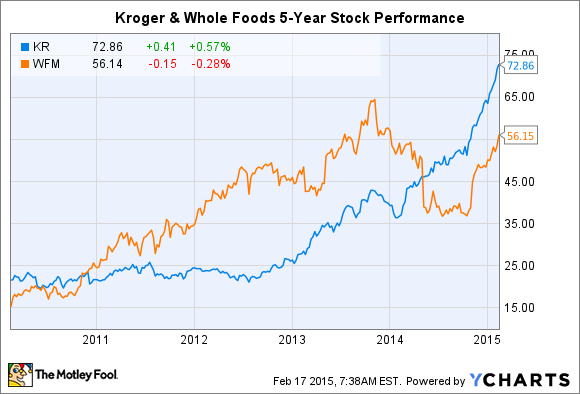 But today, I'm looking at which stock could make the better buy now for long-term investors. Here are a few key stats to start us off:

Whole Foods beats back competitors
Whole Foods is working hard at shedding its "Whole Paycheck" moniker. The perception that it was too pricey left the door open for competitors to steal market share in the growing organic groceries business. In fact, both Kroger and Costco have cited big gains in that category as key to their outsized growth recently.

But price cuts at Whole Foods seem to be turning things around: Customer traffic growth has accelerated in each of the last three quarters, capped off by the latest quarter's 3% transaction gain. The bullish case for the Whole Foods rests on the belief that these improvements are evidence the company will resume its market-thumping growth as the leading retailer of one of the hottest food categories around.

If that proves true, investors can see a long growth runway ahead for Whole Foods. The company has just 400 locations, compared to Kroger's 2,200. Management plans on boosting that store count to 500 by 2017 and to triple its store base over the longer term.

Kroger investors can't expect nearly that pace of expansion, but they can look forward to some hefty cash returns. In other words, what Kroger lacks in home-run growth opportunities it makes up for in profitable base hits. The grocer routinely improves earnings per share by 10% or more each year while increasing its dividend payout and share repurchase spending. Last year, Kroger returned $1.8 billion to shareholders by those channels, representing 5% of its market capitalization.

Meanwhile, Kroger's store brands last quarter logged their fastest growth rate in three years, helping it attract new customers and hold on to the ones it already has. Management is also on the hunt for the next big acquisition, such as the $2 billion 2013 purchase of Harris Teeter, that can quickly bulk up its national footprint.

Foolish takeaway
While I'm a Whole Foods shareholder, and not about to sell my stock, I believe Kroger looks more attractive right now. Even though the stock is up over 200% over five years, shares are reasonably valued at 22 times trailing earnings. Sure, management warned in December that Kroger's profit growth could be at the low end of its 8%-11% target range this year. But that's only because of volatile gas prices. The core grocery business is on track to continue delivering market share gains as it has for years.

And don't let the mature grocer's size scare you off. Kroger's $100 billion business still has huge opportunities in growth areas such as online ordering, in grocery categories including store brands and organic food, and in expanding into parts of the country where it hasn't yet established a dominant store base.