Shares of chipmaker AMD (NASDAQ:AMD) have fallen 15% over the past 12 months as rival Intel has (NASDAQ:INTC) rallied almost 40%. In fiscal 2014, AMD reported a net loss of $403 million, sharply down from a loss of $83 million in 2013, as it struggled to remain relevant in the CPU and GPU markets.

And things could get much worse for AMD before they get any better. Let's look at three key reasons AMD stock could keep falling this year.

Intel respectively controlled 98.5%, 90.3%, and 81.8% of the server, notebook, and desktop CPU markets in the third quarter of 2014, according to IDC. AMD, left to feed off the scraps of those markets, had to keep selling cheaper chips than Intel to remain competitive. AMD acquired graphics card maker ATI in 2006 to diversify its core business away from CPUs, but that tactic simply sent it into a multiyear price war against NVIDIA.

This two-pronged war means that AMD has little freedom to raise prices on CPUs or GPUs to offset margin declines. A comparison of AMD's operating margins against Intel and NVIDIA over the past five years shows us where AMD is headed. 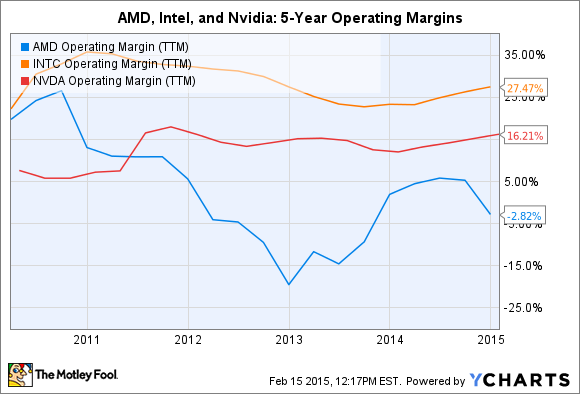 On the bright side, AMD's Enterprise, Embedded, and Semi-Custom business has been booming, fueled by strong sales of its system-on-a-chip, or SOC, products for Sony's (NYSE:SNE) PS4 and Microsoft's (NASDAQ:MSFT) Xbox One. Last quarter, the segment's revenue surged 51% year over year in 2014, accounting for 43% of AMD's top line.

Carrizo is built on older 28nm tech, compared wwith Intel's 14nm Core M. Intel can develop 14nm chips more efficiently because it has its own foundry.  AMD spun off its foundry joint venture as GlobalFoundries in 2009, and then abandoned that stake in 2012. GlobalFoundries, which still manufactures AMD's chips, plans to start mass production of 14nm chips in the "first half" of 2015, but it remains a step behind Intel.

A key difference between 14nm and 28nm chips is that the former is a fanless design, while the latter isn't. This makes Broadwell chips, like the Core M, more attractive to companies that want to produce ultra-thin tablets and 2-in-1 devices.

AMD is also noticeably absent from the Internet of Things market, or IOT, which is a major blind spot considering that IDC projects global spending on IOT tech to rise from $4.8 trillion in 2012 to $8.9 trillion in 2020. Intel, by comparison, already set up a dedicated IOT business segment last July.

Therefore, Intel's technological superiority, along with its aggressive subsidization plans for its mobile partners, could further reduce AMD's market share.

In an official statement, AMD claimed that the shakeup would "sharpen" the company's execution and position it for growth. But it also indicates that AMD might be suffering from internal conflicts of interest, which could cause it to lose focus as Intel and NVIDIA further marginalize its core businesses.

The takeaway
Some contrarian investors might believe that AMD could bounce back on rising console sales or get bought out. Unfortunately, neither reason offsets its lack of pricing power in CPUs and GPUs, its technological inferiority to Intel, and its management issues. Until AMD can address all three of those issues in a meaningful manner, this is one beaten-down stock that I'd avoid.