The report was largely in line with GM's previous guidance. The company earned $4.25 billion before taxes in 2014, a big drop from 2013 -- but huge costs related to its recalls more than accounted for the drop.

As CEO Mary Barra explained to investors during GM's earnings call, 2014 was a good year for GM. Here's what she said, along with four more things GM management wants shareholders to know.

Aside from the recalls, 2014 was a good year for GM

Barra started the call by touting GM's achievements for the quarter. (Note that "EBIT-adjusted" is GM's term for earnings before interest and taxes; it's "adjusted" because the company records interest income and expenses at the corporate level, one step above its automotive business. Because that method doesn't comply with generally accepted accounting principles, GM provides a chart every quarter that reconciles "EBIT-adjusted" to the closest GAAP equivalent, "income before income taxes.") 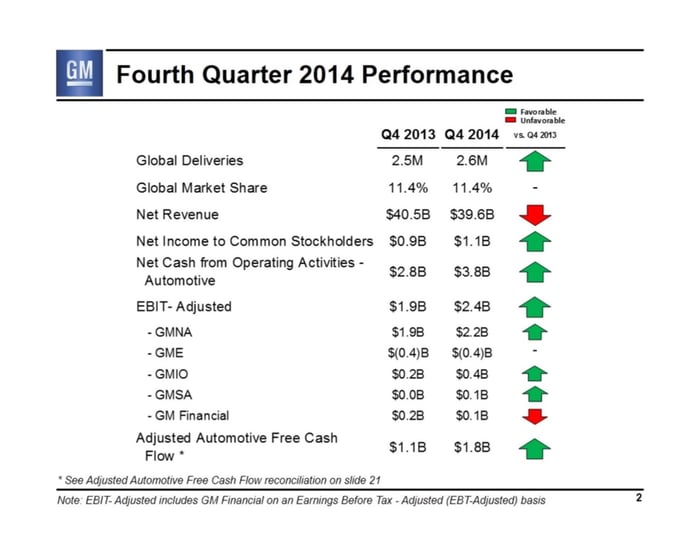 Barra: "As you can see on the chart [shown above], almost all of our key operating metrics were up, including global deliveries and net income to the common shareholders. Importantly, EBIT-adjusted was up in three of our automotive regions, the fourth was flat and our automotive net cash from operating activities and adjusted automotive free cash flow was also very strong."

"In North America, we had record average transaction prices driven by Cadillac and our new Chevrolet and GMC trucks and SUVs, and we delivered our sixth consecutive quarter of improved EBIT-adjusted margins based on core operating performance."

Barra went on to note that results in China were "solid", and those in South America and Europe improved -- excluding the effects of the recent economic decline in Russia. GM hasn't been hit nearly as hard as rival Ford (NYSE:F) has been by the severe slowdown in new-vehicle sales in Russia. But it's still likely to be a drag on its efforts to return GM Europe to profitability over the next year.

GM is committed to returning money to shareholders

We learned that GM has been under pressure to spend big on a stock-buyback program. A group of hedge funds that together own 2.1% of the company are trying to get a representative elected to GM's board of directors in an effort to force management to spend $8 billion on share repurchases over the next year.

We didn't know that during the earnings call, but Barra did. She made a point of emphasizing that GM is already doing a pretty good job of sharing cash with shareholders, and plans to do more.

Barra: "Our strategy is also designed to support a strong and growing dividend. And consistent with our strong core operating performance, we intend to increase our second-quarter common stock dividend by 20% to $0.36 per share. The decision on the expected dividend increase will be made by our board as part of the regularly scheduled second quarter dividend declaration procedure."

Chief Financial Officer Chuck Stevens expanded on that theme later in the call, saying that in addition to the planned dividend increase, GM would look at other ways to return cash to shareholders -- but not right away. Stevens is concerned that "ongoing litigation and other issues" related to GM's big recall mess could end up being expensive, and wants a clearer understanding of the potential impact of those "issues" before committing to a stock buyback or more dividend increases.

This one is important, in part because it stands in sharp contrast to those hedge funds' calls for GM to spend its cash hoard on a huge stock buyback. Barra and her team are spending big to improve GM, but they're doing it the old-fashioned way by working to improve the company's fundamentals.

Barra: "As we execute our plans, we are focused on generating the level of earnings, margin, and cash flow that will make us the most valued automaker for our owners."

I said this shortly after GM's earnings call, and it's worth saying again: From most CEOs, such statements would sound completely ordinary. What's extraordinary is this is the CEO of General Motors, a company that was mismanaged into the ground -- in large part because its management didn't attend to fundamentals.

Barra wants us to know that she and her team are keeping their eyes on the things that matter.

This is not as well known as it should be, but GM's research and development department has for decades been an innovator, in the tradition of America's big corporate labs of decades ago.

It's a very smart group that has done some very interesting work over the years. But too much of that work didn't do much for GM's bottom line. Former CEO Dan Akerson changed that, refocusing GM's R&D teams on effort that would boost the competitiveness of the company's products.

Barra wants us to know those efforts are starting to pay off, and that GM is continuing to make big investments aimed at developing advanced technology that will improve its cars and trucks.

Barra: "Leading in technology and innovation, especially in the areas of connectivity and autonomous are key are we move forward. It is a critical component of our customer-centered brand building strategy and an area we are -- where we are moving much faster than our competitors in many respects."

Barra went on to note that GM began rolling out 4G connectivity in North America last year, on over 30 different models, and will be launching it in Europe and China later this year. She also noted GM's work on other advanced in-car information and control systems, including GM's upcoming "Super Cruise" system -- an advanced cruise control system with limited self-driving capability that will launch on some Cadillac models in 2017.

GM is making a big effort to retain customers

During the call, Morgan Stanley analyst Adam Jonas asked about GM's decision to divert leasing and financing business away from a partner, Ally Financial (NYSE:ALLY), and toward its own "captive" in-house financing arm.

Barra often talks about winning "customers for life," happy consumers who loyally buy GM products one after the other for many years.

The key to winning that kind of loyalty, first and foremost, is to build great products -- and GM's have made huge strides over the last several years. But there's more to it than that, and as you can see from Stevens' answer to Jonas, GM's managers want us to know they're making smart investments to help their dealers win repeat customers.

Stevens: "No. 1, first and foremost, is owning the customer. This is all about customer relationship and driving improves the loyalty. And what we've found and I'm not saying it's specific to Ally, but in other lease providers, at the conclusion of lease their objectives may not be the same as ours. Our objective is to get that person another General Motors vehicle and maintain that relationship and own that customer. So this is 100% around loyalty and customer ownership."