As the April launch for Apple's (NASDAQ:AAPL) smartwatch, the Apple Watch, approaches, the company's unique plan to market the device continues to take shape. One of the latest clues to Apple's marketing strategy for Apple Watch comes from a rumor that the tech giant is preparing to show off the watch inside Paris' Galeries Lafayette, a high-end department store. 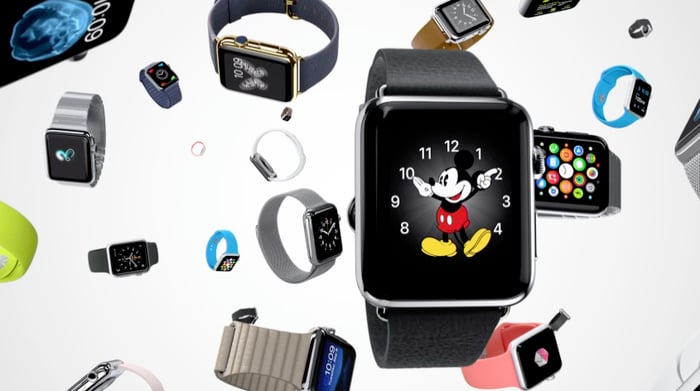 Obliterating the barriers between fashion and technology
When Apple announced in the first half of 2014 that it was poaching former Burberry CEO Angela Ahrendts to head its retail arm, there was speculation that her fashion industry experience could have been one of the key reasons for the hire -- especially as speculation for an Apple smartwatch ramped up. But now with an Apple smartwatch official, and as the launch draws closer, it's increasingly clear that her experience from fashion retail will, indeed, play a key role in the marketing of Apple's new device.

Construction on a stand that is hidden from onlookers that began in the beginning of February is scheduled to finish ahead of the Apple Watch launch in April, French site Mac4Ever (via AppleInsider) says. Further, Mac4Ever asserts that Apple's Ahrends oversaw the planning for the set up and planning for the project.

Apple's decision to market the device in this high-end fashion location mirrors Apple's recent fashion-focused marketing tactics for Apple Watch, including showing the Watch during Fashion Week in Paris earlier this month in partnership with Collete and a recent announcement that the watch would be featured on the March cover of Self magazine on the wrist of Victoria's Secret Angle Candice Swanepoel.

Beyond Apple's attempts to invade the fashion industry, ifoAppleStore said earlier this month that Ahrents is considering "major physical changes" for Apple Stores.

Can Apple tap into high consumer spending on apparel?
While the Apple Watch is still an untested product that many investors may still view skeptically, it's good to see the company taking its transition to fashion so seriously. Per capita spending on apparel in many of Apple's key markets dwarfs the cost of a subsidized iPhone. In the U.S., the average person spent close to $1,200 in 2012 on apparel. A handful of European countries have significantly higher per capita spending on apparel; consider Italy and Germany's figures at about $1,900 and $1,400, respectively. The global apparel market amounts to $1.2 trillion per year, more than a fourth of which is in the United States.

Apple has reportedly placed orders for 5 million to 6 million Apple Watch devices from suppliers ahead of the launch, according to The Wall Street Journal. While Apple has announced that its entry-level Apple Watch Sport version will start at $349, it's still unclear how much the stainless steel and gold versions will cost. The Journal speculates the gold version of the watch, dubbed Apple Watch Edition, could be one of the most expensive products Apple has ever sold, with prices "likely surpassing the $4,000 Mac Pro computer."