On Monday, however, Google made headlines when a U.S. federal judge dismissed a separate, similar antitrust suit. Should Yandex investors be concerned?

Not necessarily. These are two separate cases in completely different legal jurisdictions. But the Calfornia case does offer some much-needed perspective on what Yandex is trying to achieve.

The burden of proof
Google's latest legal win comes from the U.S. District Court's Northern District of California, where it faced a potential class action suit brought by two customers who alleged that Google monopolizes search engines in Android phones.

The customers had recently purchased Samsung Galaxy smartphones, but claimed they didn't know Google would be the default search engine or how to change it. What's more, they argued Google was stifling competitive innovation, and that Android devices could cost less and contain better search functionality if it weren't for Google's strict mobile app distribution agreement, which governs the rules by which Android smartphone makers must abide in order to use the company's otherwise-open operating system.

U.S. District Judge Beth Freeman granted Google's motion to dismiss all counts, stating the plaintiffs failed to establish a link between software requirements and phone pricing. To be fair, she also granted the plaintiffs three weeks to amend their complaint.

But perhaps most notable to our discussion, Freeman stated "there are no facts alleged to indicate that defendant's conduct has prevented consumers from freely choosing among search products or prevented competitors from innovating."

Yandex is the undisputed leader of the Russian Internet search market, with a share of 59.7%, but that was down from 60.3% in the previous quarter, 61.6% in the second quarter, and 61.9% during the same year-ago period. According to Yandex's earnings slides, that share appears to be going directly to Google: 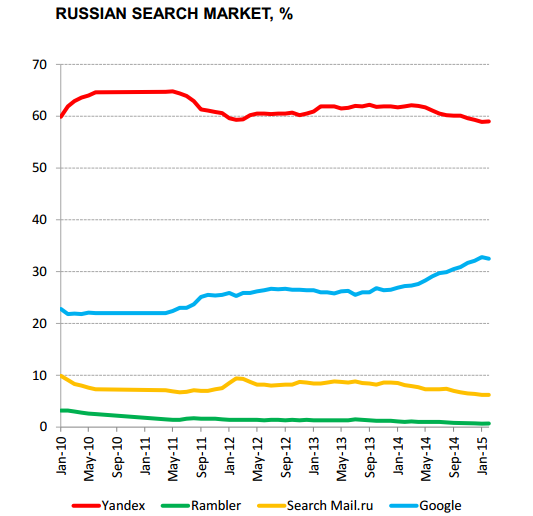 As a result, Yandex is asking Russia's antitrust agency to open an investigation, and to consider Yandex's belief "that user-centric services, such as search, maps, email, etc. should be unbundled from Android OS." Yandex further insisted that such a move would return the market "to a level playing field where competition is over quality of products and services rather than bundling and pre-installation."

However, Google is probably getting good at rehashing its argument that consumers are free to download Yandex's competing services from the Google Play store. What's more, Big G will almost certainly point out Yandex is effectively asking for smartphones to contain all the Google products from which it benefits -- notably Android and Google Play -- and none that could adversely affect it. Whether Google is abusing its position of power remains to be seen, but you have to admit there's a certain irony in Yandex's request.

Google has history on its side
It's also worth noting Google is no stranger to such complaints or their resulting investigations. In January, the global search giant emerged victorious after a nearly two-year investigation by the Federal Trade Commission determined it had not violated antitrust laws in the way it positions its search results in the United States.

And only last month, Google agreed to a tentative settlement in a four-year investigation with European Commission regulators. In both cases, Google avoided formal charges by agreeing to make small changes to its search function in favor of its competitors, all without admitting wrongdoing.

I wouldn't be the least bit surprised if Google finds a similar middle ground with the Russian antitrust agency when all is said and done in this case. Perhaps, for instance, Google could continue bundling its supplementary software in Android smartphones, while also allowing local vendors to pre-install selected competitive apps.

But if this case is anything like Google's others, investors should keep in mind it could take years before Yandex enjoys such a resolution. This begs the question: How much market share will Yandex lose in the meantime? Because if Google continues taking share as it has over the past year, Yandex shareholders could be in for a rough ride.