So what: Century Aluminum released fourth-quarter financial results after the market close on the 24th, coming up short of analyst expectations for earnings per share. The company delivered $0.63 per share, while analysts were looking for $0.66. However, sales were strong at $551 million, well ahead of the $510 million Wall Street was expecting.

Now what: Century Aluminum has some relatively positive tailwinds, as demand for aluminum is on the rise, and the company is now solidly profitable after several years of losses and negative cash flows: 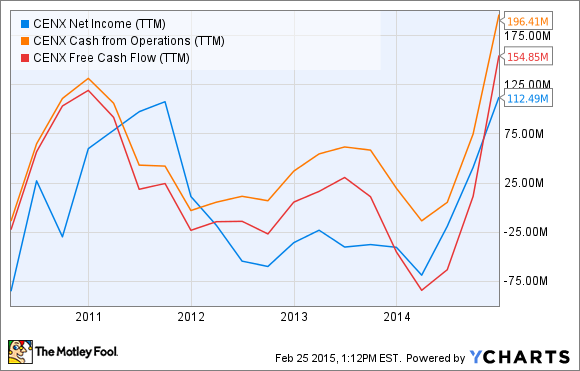 If the upswing in aluminum demand continues -- which looks likely -- this could be a good opportunity to open a position, or add a few shares. However, Century operates in a very cyclical industry and has relatively high fixed costs.

This isn't an investment to "set and forget," but rather watch for signs that the industry is starting to slow. If you're not comfortable being a little more active with keeping an eye on the aluminum market and Century's performance, then this might not be a good place to invest.