United Technologies Corp (NYSE:RTX) investors can expect some changes in 2015, not least because the company appears to be shaping up for a major acquisition. In addition, recently appointed CEO Gregory Hayes is actively reviewing the company's portfolio of businesses.

Hayes discussed such matters at the recent Barclays Industrial Select Conference. Let's take a closer look at what he said. Can we draw any conclusions about what can investors expect in 2015?

Three things to look at with United Technologies
Ever since Louis Chenevert abruptly retired as CEO in November, analysts have been speculating on what direction Hayes would take the company as he stepped up from CFO. In this article I'm going to focus on three talking points from his recent presentation.

The future of Sikorsky -- best known as being the manufacturer of Black Hawk helicopters -- has long been a moot point, with speculation rife that management would be willing to sell or spin off the business.

It's not hard to see the logic behind a potential sale. Unlike the other two aerospace segments, Sikorsky has heavy exposure to military spending, with 52% of its sales going to the U.S. government alone in 2014. The other two aerospace-focused segments, Pratt & Whitney and UTC Aerospace Systems, have less exposure, with 22% and 19% of sales going to the U.S. government in 2014.

Moreover, Sikorsky has the lowest operating profit margin of all its segments -- suggesting management could sell it and use resources to focus on generating synergies within the overall company's commercial aerospace operations. 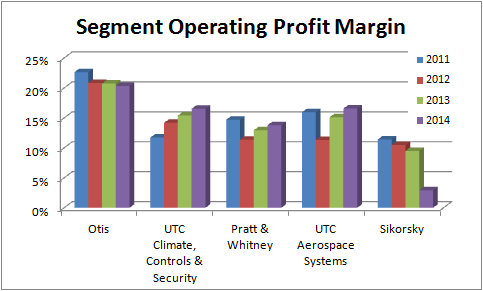 With that said, some investors might have been disappointed when Hayes stated, "We are not going to sell Sikorsky" at the investor meeting in December. However, his emphasis seemed to change, albeit subtly, at the recent Barclays conference.

He consistently referred to commercial aerospace and building as the company's core activities, amid making it clear that he was reviewing the portfolio and seeing if there were "pieces of the portfolio that didn't fit." Might Sikorsky be sold after all?

Acquisition plans
Hayes also spoke about his willingness to make an acquisition for more than $5 billion. It's a large amount, but as he pointed out, a company of United Technologies' size needs scale in order to efficiently use management resources and generate significant synergies from a deal.

He also outlined the intent of not doing something outside of its core commercial aerospace and buildings operations, while highlighting the strengths of being in two separate industries. For example, the buildings operations generated the cash flow to enable Pratt & Whitney to invest in developing the geared turbofan engine.

Therefore, investors shouldn't be too hopeful of the company splitting into two separate parts (aerospace and buildings). Within aerospace, he pretty much ruled out an acquisition in avionics -- an area of strength for its rival, Honeywell International (NYSE:HON) -- because the opportunity to generate cost synergies with United Technologies in existing aerospace business wasn't obvious. However, Hayes stated that he would look at companies with "mechanically actuated systems."

One company long associated as a potential target is U.K. aerospace company Meggitt (LSE:MGGT). With a market cap of around $7 billion, it has the scale to attract United Technologies, and it already manufactures parts for Sikorsky military rotorcraft. Meggitt currently generates 48% of its revenue from civil aerospace, and its aircraft braking systems (21% of first-half 2014 revenue) and control systems (23% of first-half revenue) appear to be a good fit for United Technologies. Moreover, around 57% of Meggitt's military revenue already goes to the U.S.

Increasing productivity
Indeed, in a previous article on United Technologies, readers saw a breakout of its segmental return on assets, or ROA, (updated chart below), which suggested that management could look to increase the ROA generated with UTC Aerospace Systems. 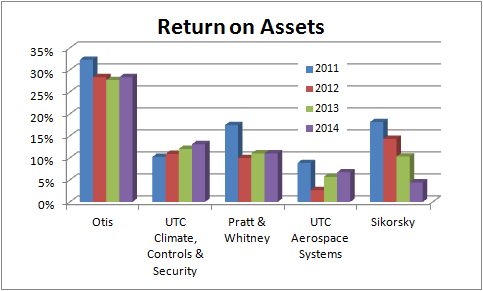 Cutting out unnecessary costs for UTC Aerospace is obviously a focus. In January, management announced plans to eliminate UTC Propulsion & Aerospace Systems, or PAS. Pratt & Whitney and UTC Aerospace used to operate under the PAS structure. Hayes outlined that this move would help cut costs by $50 million to $60 million. Moreover, he stressed the need to make the organization leaner -- classic stuff from a former CFO.

Where next for United Technologies?
It's possible that Sikorsky could be sold--something the market would welcome in my opinion. Potential upside could also come from the acquisition of a company like Meggitt, not least because United Technologies could generate cost synergies from such a deal.

All told, United Technologies investors should prepare themselves for an active year in 2015, and management making the right strategic moves could propel the stock higher.