Should you buy United Parcel Service (NYSE:UPS) or FedEx (NYSE:FDX)? It's one of the most common investment questions, but also one that doesn't need to be answered -- you can always buy neither or both. However, if you forced me to make a decision on one or the other, I would say UPS looks like a better value right now; here's why. 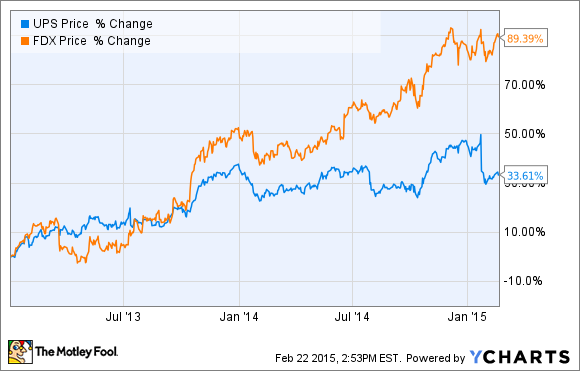 Why UPS has underperformed FedEx
Let's start by looking at why UPS' stock price has lagged FedEx's over the last couple of years. I see three reasons.

First, growth in e-commerce has created an increasingly complex trading environment around peak demand in the holiday season, and dealing with it caused UPS to miss estimates in the last two winter quarters. In comparison, FedEx took a hit in the winter of 2013, but given that full-year EPS guidance of $8.50-$9.00 to May 2015 was reaffirmed in January, it's reasonable to conclude that FedEx had a decent winter in 2014.

Second, at the start of 2014, FedEx and UPS both announced plans to invest in order to be better prepared for peak demand. UPS was forced to increase the amount invested in 2014 by $75 million -- and EPS guidance was cut accordingly. In the end, full-year 2014 EPS turned out 8% lower than the midpoint of UPS guidance at the start of the year.

Third, FedEx had upside drivers coming from operational execution. Specifically, its profit improvement plan, intended to improve operating profits by $1.6 billion by the end of May 2016. According to the CEO of FedEx Express, David Bronczek, on the last earnings call: "Our profit improvement plan is working, it's on track, our management team is successfully executing" -- and the market seems to have rewarded FedEx for its execution.

FedEx with its ducks in a row.

Why should value investors buy UPS over FedEx?
One variant of value investing is to compare at least two similar companies in an industry and find a metric or aspect in which one is underperforming the other. The idea is that, since both companies operate under similar conditions, there will be a good opportunity for the laggard to close the gap. A classic example would be with two supermarket chains in the same country, and a metric such as, say, sales per square foot.

The theory is that the laggard (UPS here) will be priced relatively attractively by the market -- in this case, because UPS is now associated with failing to deal with peak demand patterns during the holiday season, or at least relative to FedEx.

In fact, UPS and FedEx have similar challenges and opportunities this year. Both are implementing dimensional-weight pricing initiatives, and dealing with burgeoning e-commerce business-to-consumer, or B2C, demand. The issue that separates them is how to deal with peak demand, so why do I think that UPS can "catch up" and execute with peak demand next year?

Why UPS can play catch-up
The answer lies in something that FedEx Services VP of market development and corporate communications, T. Michael Glenn, discussed on the earnings call in December: "I think we've seen some shifts here that will be positives for the long haul and that is demand is really shifting more towards the entire peak season rather than on specific days. ... Black Friday and Cyber Monday events have become more of weeklong events to really de-pressurize those days a bit."

UPS management made a similar commentary in its fourth-quarter earnings presentation. In fact, the smoothing out of peak demand (albeit with a higher peak), rather than a smaller number of large peaks, is what caused UPS problems in 2014.

Simply put, in 2014 UPS overcompensated for the type of peak season (small number of large peaks) seen in 2013, but that was partly caused by severe weather and a lack of preparedness by retailers. In other words, the issues that UPS has had with peak demand are not unfixable.

Valuation matters
Going forward, UPS is implementing the changes necessary to deal with peak demand, and my opinion is that it's a 50/50 call on which company will perform better in next year's holiday season.

However, the following chart of forward enterprise value (market cap plus net debt), or EV, to earnings before interest, depreciation, and amortization, or EBITDA, demonstrates that the premium valuation commanded by UPS over FedEx is at its lowest point in years -- an indication that the market has relatively more confidence in FedEx these days.

The EV/EBITDA metric is commonly used to compare companies and is a good way to account for debt in valuation comparisons, and the closing of the historical premium indicates it could be time to buy UPS over FedEx. 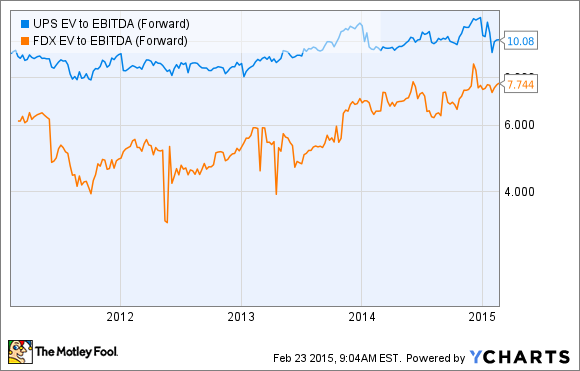