Whether you realize it or not, the U.S. apparel industry is giant.

In short, the demand for new and inspiring apparel should grow for years to come. However, that does not make the decision of where to go any easier for shoppers. In 2013, retail data showed that there were more than 25,000 retail locations for just 22 of the leading apparel retailers in the country. This is where the differentiating factor of brand value comes into play.

The importance of brand value
Brand value is what helps consumers develop trust with a company, and it tends to be the driving force that turns customers into loyal stewards of that company. Word-of-mouth advertising is invaluable as retailers count on their products and a unique customer experience to generate future sales. Additionally, a trusting and loyal customer base is more willing to accept price increases and less reliant on sales promotions. In other words, they tend to be high-margin customers and really provide a solid foundation for retailers.

Of course, measuring brand value is not easy. Now, we turn to the 2014 release of the BrandZ Top 100 Most Valuable Global Brands report issued by Millward Brown.

So how is brand value calculated? The formula Millward Brown uses is secret, but the driving factors tend to be well-known. These include the ability to create trust, to drive personalization and authenticity of products and the shopping experience, to be multi-functional for active lives, and to be seamless in the ability to hit multiple media channels.

Apparel leads the way
Among the more than one dozen categories that the BrandZ Top 100 report examined in 2014, none saw their brand value soar more than the apparel industry, which increased 29% in 2014 on top of a 21% increase the prior year.

As the report notes, the multi-functionality of apparel and how apparel made consumers feel were the primary drivers of growth in 2014. However, the report also notes that consumers were particularly honed in on price last year, often waiting for sales to make their purchases. Social media continues to play a growing role in keeping consumers informed.

Let's first look at one struggling company and then examine the standout of the group.

A surprising brand-value laggard
The real disappointment in the apparel industry was Lululemon Athletica (NASDAQ:LULU), which ranked ninth with a global brand value of $3.26 billion, down 13% from the previous year. It was the only apparel brand to see its global brand value fall on a year-over-year basis.

Why did Lululemon falter? One needs only look at the 2013 controversy that involved its black yoga pants to get a good idea of why the brand suffered. Active lifestyle customers lost trust in the company after discovering that its black yoga pants were partially see-through. Following the subsequent resignation of its CEO over the matter, things got worse when founder Chip Wilson blamed customers for the problem. Although the company has dealt with its product issue, the negative PR from the incident should take time to overcome.

The kingpin of global apparel brand value
The next eight companies witnessed their brand value soar by anywhere from 13% to as high as 58% year-over-year.

Privately held Japanese retailer, Uniqlo, was the biggest gainer, rising 58% to a global brand value of $7.3 billion as its functional and technologically enhanced fabrics, which hold heat in or let air out, helped drive sales with active consumers. Uniqlo ranked fourth in the BrandZ apparel rankings.

Adidas (OTC:ADDYY) was another big winner, with its global brand value rising 47% to $7.19 billion to occupy the No. 5 spot. Instead of banking on technology, Adidas relied on sponsorships at the 2012 London Olympic games and the 2014 FIFA World Cup in Brazil to boost its brand awareness.

But neither of these two companies even comes close to rivaling the kingpin in the apparel sector, Nike (NYSE:NKE), which finished 2014 with a global brand value of $24.58 billion, up 55% from the previous year, ahead of Zara and H&M in the No. 2 and No. 3 spots, respectively.

Why Nike?
According to the Millward Brown report, Nike soared in 2014 largely because of its combined reliance on technology and social media. Specifically, the report cites the Nike FuelBand, which acted as a brand driver as it melds technology, apparel, and wearables into one product.

This is just a snippet of what has helped build the Nike brand.

For example, its logo -- the "Swoosh" -- has become synonymous with the brand and an active lifestyle. Based on a report from The New York Times in 1998, company research indicated then that 97% of Americans recognized the Swoosh as a Nike-branded product. Strong brand recognition can lead to a decreased need for marketing, since word-of-mouth advertising can fill in the gaps, and it can drive a genuine desire in consumers to own and wear a brand that most of the country is clearly familiar with. 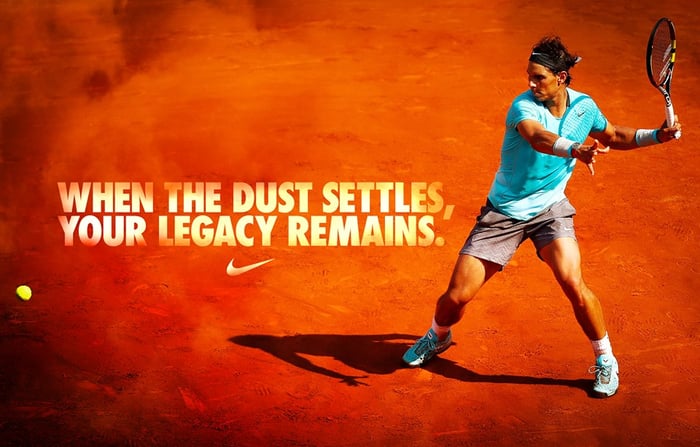 Nike also boosts its brand value by wisely choosing its ambassadors. What began with basketball legend Michael Jordan has transformed into partnerships with NBA star LeBron James, golfer Rory McIlroy, and tennis stars Rafael Nadal and Maria Sharapova. This roster of well-liked and respected athletes helps further fuel consumer desire to be like the superstars they so admire.

Combined, these brand-building components have led to incredible growth for Nike and its investors across the globe. Through the first six months of its current fiscal year, Nike has enjoyed a 14% increase in North American sales, a 27% jump in Western European sales, and a 19% rise in greater China sales. China had previously been a sore spot for Nike, so to see the company growing footwear sales in China by 30% is a great sign and a clear indication that its brand visibility in Asia is improving.

With plenty of opportunities left to introduce its brand in emerging markets and grow throughout China, investors looking to capitalize on the apparel industry would be wise to consider global brand value leader, Nike.