Given the dramatic drop in the price of oil over the past few months, the burning question on a lot of minds is "What will the price of oil do next?" It seems like everyone has an opinion on that question. The range of predictions goes from $10 at the bottom to a staggering $200 a barrel at the top. What that range tells us is that where oil will go in the future is anyone's guess, and for the most part these price predictions do sound like guesses. Educated guesses, but guesses nonetheless.

The best guess, with a range of possibilities
One of the more educated guesses comes from the oil market itself. While many believe that the price of oil is set by a combination of supply and demand with a sprinkle of market sentiment, that's not entirely true. Its price is actually set by the oil futures market, which combines those factors into a future price for oil based on oil futures contracts. These binding agreements give the purchaser the right to buy oil at a predefined price and on a predefined date.

Right now the market is in contango, which means that the market believes that the price of oil will be higher in the future. We see this in the following chart from the U.S. Energy Information Administration, or EIA, which is the government's official energy forecaster. 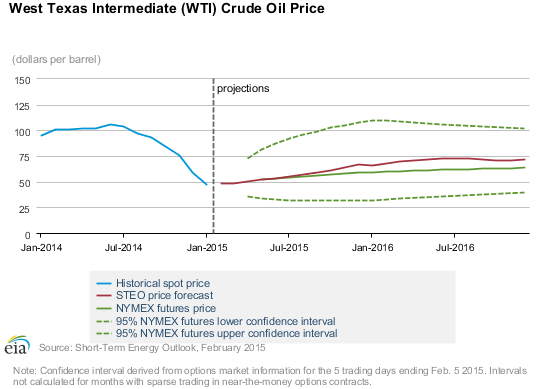 The above forecast is from the EIA's short-term energy outlook, which it updates each month. That chart indicates a number of forecasts, but the one we're interested in is the futures market price, which is the solid green line. From here we can see that at the moment the futures market is offering $60 a barrel for oil to be delivered a year from now, which is almost $10 per barrel higher than the current price.

That said, the market also offers a range of possible future oil prices based on the implied volatility, which are the dashed lines. These lines indicate that the market is very nervous, and while it is currently offering $60 a barrel for oil to be delivered later this year, it sees possible future prices for oil being anywhere in the range of $32 to $108 by this December.

That being said, the fact that the market is in contango at the moment is a bullish sign for future oil prices. This is why the EIA's official price forecast, the red line, is a bit higher. It's also why oil companies have decided to cut back on drilling so dramatically this year, as they see no point in bringing too many new wells online right now when they can earn more money by bringing those wells online in the future when the price of oil is expected to be higher.

A tango with contango
The CEO of top U.S. oil driller EOG Resources (NYSE:EOG), for example, noted on the company's last conference call that it was "intentionally delaying completions while we wait on improved product prices." It's the company's view that by waiting a few months to complete these wells it will earn a substantially higher return, which is demonstrated on the following slide. 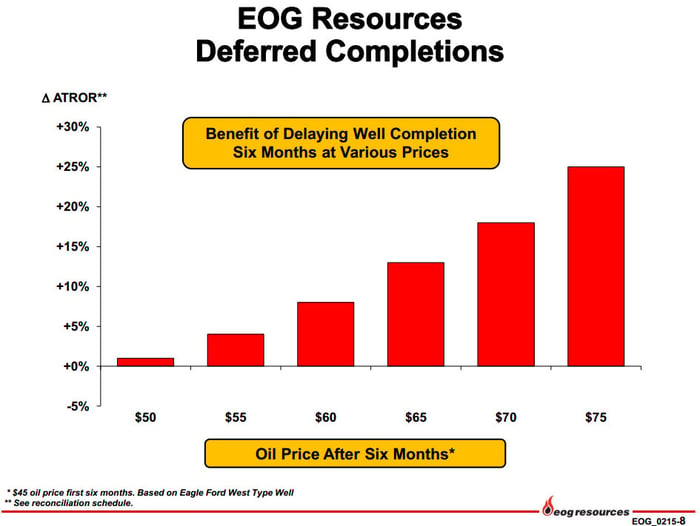 By drilling wells, but not completing them, companies like EOG Resources are betting big that the market being in contango means that the price of oil will indeed be higher in the future. As the EOG Resources' slide noted, a move from the current $50 oil price to a $60 oil price over the next few months would boost its overall returns by 10%. With that key market signal in hand, EOG Resources and many of its peers are simply waiting out the market in order to capture that higher return.

Investor takeaway
While oil price predictions are all over the map, the oil market is signaling a $60 oil price by the end of the year. While that's not as robust as oil companies would like, it's still much better than today's price. That is why we are seeing a growing number of oil companies that are willing to wait to complete wells in order to enjoy that higher return.