The gaming industry has changed a lot in the last decade, with the fall in Las Vegas, the rise in Macau, and other new gaming spots opening up elsewhere. Now companies like Las Vegas Sands (NYSE:LVS), Wynn Resorts (NASDAQ:WYNN), and MGM Resorts International (NYSE:MGM) are looking for the best way to drive future profits. Here's what the global gaming industry looks like going forward, and why Las Vegas is probably not the best bet.

The U.S. still isn't a good bet
When the recession of 2008 hit, Americans started spending less on non-essentials, such as trips to Las Vegas. During the two years following the recession, gaming revenue there dropped around 20%. Six years later, gaming revenue in Las Vegas is getting close to reaching 2007 peaks, but it actually fell again in 2014, year over year.

However, overall revenue is up in Vegas, and this is a good shift. While gaming in Las Vegas continues to be not such a good bet, non-gaming revenues like entertainment, dining, and especially convention and hotel revenues are growing. Las Vegas welcomed more guests in 2014 than ever before, at over 41 million.

While Vegas becomes a more diversified vacation and business/convention hub, companies making the best bets there, like MGM Resorts, have reported increases in segments like RevPAR (revenue per available room) at their Vegas hotels and year-over-year increases in convention space revenue. However, these increases still aren't driving bottom-line growth for the biggest companies there.

Even though MGM is the biggest winner on the Vegas recovery so far, MGM's recent 2014 full-year income loss proves that betting on the U.S. gaming economy alone might not be a good idea yet. True, much of MGM's income issues stems from drops in Macau, not in the U.S., but Macau only accounts for about 1/3 of MGM's total revenue -- the rest comes from the U.S., which clearly hasn't been profitable enough to post positive income for the company.

The other biggest gaming company in the U.S. by number of properties is Caesars Entertainment (NASDAQ:CZR). However, with huge debt burdens and interest expense of over $1.5 billion a year, among other income-depleting issues due to excessive growth without enough payoff, Vegas regrowth has not been enough to pull Caesars out of its income losses, either. Now the company is entering its largest segment into bankruptcy protection and restructuring the corporation.

Meanwhile, growth in the U.S. East Coast looks potentially promising, and MGM will be building two new resorts there in the next one to two years. However, recent regrowth there hasn't been enough to stop these companies from reporting losses, either, and it would take a substantial growth in EBITDA there to do so. Other companies, like Wynn and Las Vegas Sands, get very little of their global revenue from the U.S. Here's how they are making bets instead.

A recovering Macau is a good bet
After such an amazing 2013, and start to 2014, no one really expected the major downturn that would come to Macau's gaming economy in the past few quarters. The issues there are due mostly to the campaign China's president has taken against corruption, which has driven down the VIP segment that had been behind the majority of gaming revenues in Macau in the past.

However, there are some big positives for Macau going into 2015. In fact, not focusing on the VIP gaming segment is a good thing long term. Instead, the mass-market segment, made up of middle-class visitors, is growing steadily, up nearly 20% year over year for the last few quarters. It's this segment that will drive more substantial increases for companies there going forward.

Along with this growing mass-market segment, each major casino company in Macau is building a brand-new resort to open on Macau's Cotai strip. Each of these companies, including local Melco Crown (NASDAQ:MLCO), plans to open its newest resort there in 2015 or 2016. However, the strip is already dominated by Las Vegas Sands with the Venetian Macao, Four Seasons, Sands Cotai, and more. 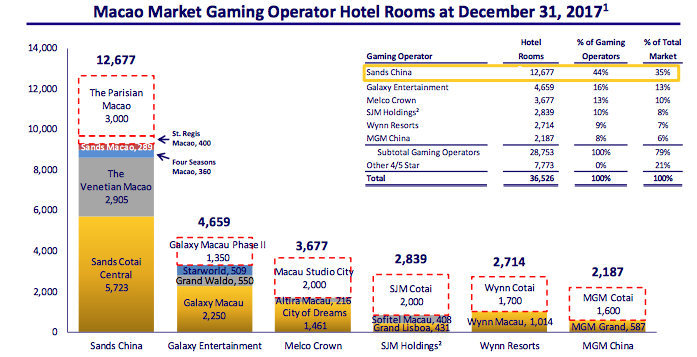 That dominance is about to increase with its coming Parisian resort, which will open toward the end of 2015 and will include over 3,000 guest rooms, making Las Vegas Sands the biggest bet on a growing mass market in Macau, where LVS has more rooms than any other company.

Betting elsewhere in Asia could be a huge win, too
Singapore has proven once again to be a major growth driver for Las Vegas Sands in the most recent quarter, somewhat offsetting the issues in Macau. The only other gaming company in Singapore is Malaysian company Genting, and it will stay that way for a long time because of the government's two-casino restriction.

The Philippines is the newest market to come online, with very few companies making a bet there yet. Melco Crown just opened its City of Dreams Manila last quarter. Other than the Philippines, South Korea could be another interesting market as the government there toys with lightening regulations to allow it to be more like Singapore. As of now, both of these markets are very small compared to other options, but they could grow more substantially in years to come in the same way Macau did.

However, the most exciting of these potential new Asian gaming hubs could be Japan. Analysts predict the gaming market there could be worth more than Singapore and Las Vegas, second only to Macau. As of now, casinos are banned in Japan. However, the government there has been debating the possibility of allowing gaming companies to build integrated resorts to bolster tourism. The bill to pass them didn't make it to a vote in the most recent congressional session, but expect its debate to come up again this summer.

The best bet going forward
The best bet now is still Asian growth. It's true that Macau's performance has been the leading cause of so much decline in the industry lately, but the important trend is that the mass-market segment will continue to grow in Macau and drive growth over the long term.

Then in Singapore (definitely), Korea and the Philippines (possibly), and Japan (hopefully), more Asian gaming growth could lead to more major profit growth in years to come for companies like Las Vegas Sands and Melco Crown, which are in front of this diversified Asian region.