Costco (NASDAQ:COST) hit an all-time high recently of just over $150 per share. The warehouse retailer's stock is up a massive 30% in the last year -- and that's not including the special cash dividend of $5 per share that management just delivered to shareholders. 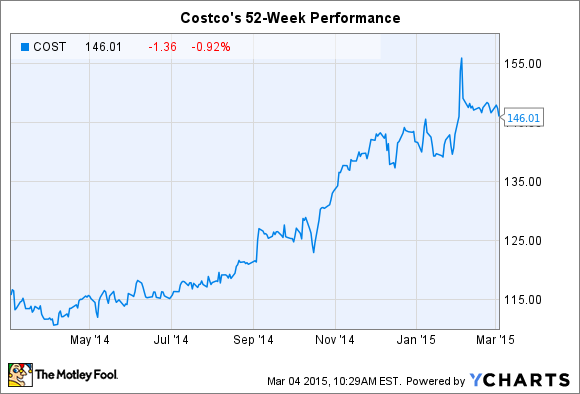 Valued at over 30 times last year's earnings, Costco looks more expensive now than it has at any point in the last decade. However, if you're sitting on the sidelines hoping for a much better entry point, you will likely be disappointed: The stock consistently trades at a premium to both the market and its fellow retailers. 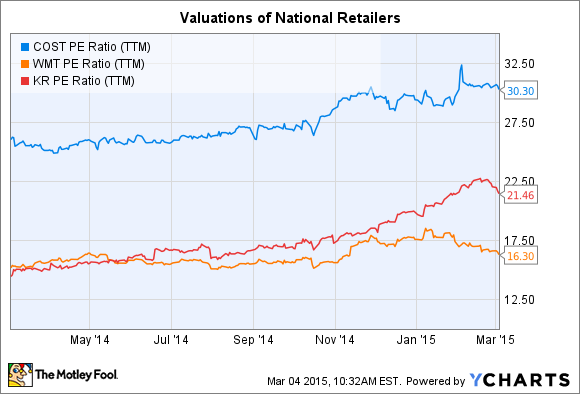 There are solid reasons for that premium, particularly revenue growth that puts rivals to shame. Costco's comparable-store sales have risen at a 5% or better pace in each of the last four years. Target and Wal-Mart's Sam's Club couldn't come close to that result: They both booked comps improvements of just 1% in the last year.

Keeping customers happy
Costco's success boils down to keeping its 70 million warehouse members delighted, year after year. And we have plenty of evidence beyond sales growth that shows how well the company is succeeding on that front.

A recent survey from the American Consumer Satisfaction Index, for example, found Costco on top of all specialty retailers with a satisfaction score of 84, well above the 79 average of the group. That outperformance is a good sign for the business, but so is this: Costco was one of just a handful of companies to avoid any drop in satisfaction this past year. Considering the big rise in food costs, which forced most retailers to raise their own prices, it's impressive that Costco was able to keep its paying members as happy as ever while booking steady profit growth.

And then there's the warehouse giant's renewal rate, which the company in its annual report calls "essential to our business model."  Costco's stellar, and growing, success with shoppers shows up there in the fact that the renewal rate ticked higher by a percentage point in 2014 to 91%.

Pricey valuation
The biggest risk to investors with a business that's performing this well is in paying too high of a price. That's clearly possible in this case. Wall Street expects Costco to book $5.16 per share of profit this fiscal year, up 11% over 2014. The stock is valued at a steep 28 times those expected earnings. You can own Kroger, which is also booking record results lately, for a relative bargain at 20 times projected earnings.

However, I don't think a pricey valuation should keep investors out of Costco. And if you're skittish about paying too much, consider taking some time to build up a position in the stock.

A good rule of thumb is to purchase your stock in thirds. That means that if you wanted to invest $2,500 in a company, you would make three purchases of $830 each. Sure, you lose some upside if the stock spikes higher in a short time. But you are also protected from jumping in at a temporarily elevated price.

Costco's $150 price might mark a high point that the stock won't see again in a year, or it could be a stepping stone up to $163 or higher. Either way, it shouldn't make much difference for long-term investors. As long as the retailer keeps delighting its customers, Costco is likely to improve earnings and sales substantially over the next decade. That's a ride that I think investors shouldn't pass up just for the sake of saving a few percentage points of their initial investment price.

It's worth noting that the company reports earnings tomorrow morning, so investors will soon have some more data to digest.