The global oil supply glut has caused Brent -- the international crude oil price benchmark -- to slide to $60 a barrel from a peak of $115 a barrel last June. More alarming, however, is the supply glut within the United States that has caused the domestic West Texas Intermediate to remain suppressed at around the $50 per barrel mark. While that is testing the nerves of quite a few U.S. oil producers, Valero Energy (NYSE:VLO) looks set to outperform the market.

Below are three reasons why the San Antonio, Texas-based refining giant -- and investors -- should take advantage of the current low-price environment. But before that, let's take a look at the spread that the market seems to be missing.

A background on the most important metric: The Brent-WTI spread

For the uninitiated, the international crude oil price benchmark had galloped ahead of the domestic WTI benchmark in early 2011 (see chart below). That's because, as crude oil production took off in the United States -- thanks to the shale oil revolution -- limited transportation and storage capacity meant a perennial supply glut at Cushing, Oklahoma, the WTI storage hub. No additional transportation capacity could match the growing crude oil production and ease congestion at Cushing.

The spread had almost but disappeared in the wake of plunging global crude oil prices last year. 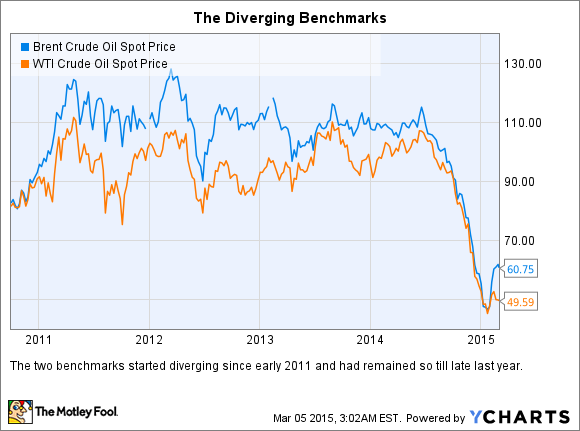 However, notice in the following chart that the Brent-WTI spread has been quietly widening again over the last four weeks. 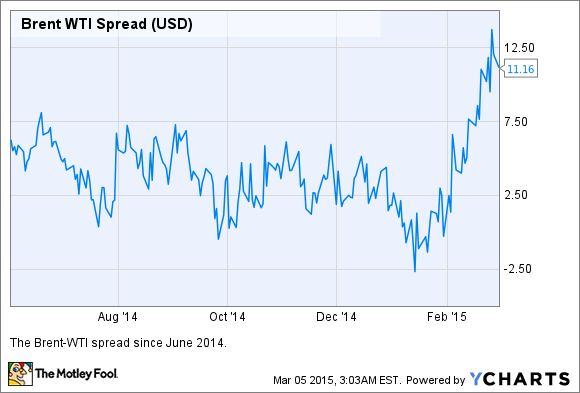 WTI crude prices continue to remain depressed at around $50 per barrel, even as the international Brent benchmark pulled past $60 a barrel after bottoming out at $46 in January. As a result, the spread has widened to $10 a barrel.

Low oil prices are a boon to refiners, since that means lower feedstock costs. However, U.S. refiners -- such as Valero Energy -- are especially at an advantage since they can now access much cheaper feedstock.

Below are three reasons why Valero could specifically do well in 2015.

1. The Brent-WTI spread could widen, or at least remain in place for quite some time
The United States is running out of commercial crude oil storage capacity. According to an Associated Press report, the nation has been producing and importing 1 million more barrels of crude oil on an average every day than it is consuming for the past seven weeks. Total inventory levels have hit 434.6 million barrels -- the highest in 80 years according to the Energy Department. WTI prices could further plummet if full capacity or "tank tops" in industry-speak is reached. 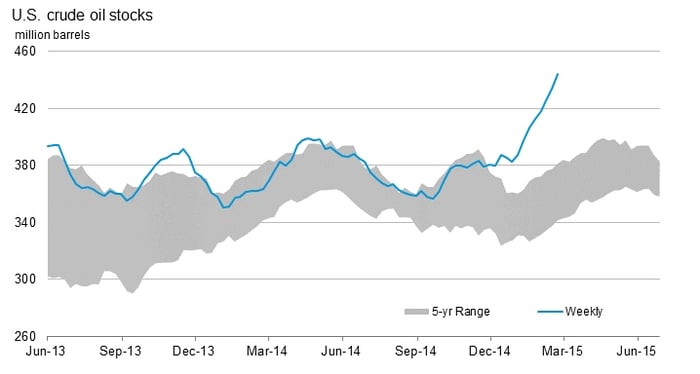 According to analysts and CEOs, depressed prices could remain in force for a couple of years with weak global demand growth not matching production or supply growth. Additionally, investors must note that despite the United States producing 9.2 million barrels of crude oil per day, the country has an export ban in place, meaning all the crude produced must be processed within its borders, except for negligible exceptions.

Valero Energy has a throughput capacity of 1.66 million barrels per day, or bpd, in the Gulf Coast with an additional 465,000 bpd throughput capacity in the U.S. Midcontinent. In the Gulf Coast and Midcontinental regions, crude oil prices are especially depressed as high congestion in crude oil transportation occurs between Cushing and the refineries.

In 2014, a solid 44% of Valero's total crude input charges were heavy crudes, while the costlier sweet crudes corresponded to just 23% of total processed volumes.

3. The stock is cheap
On the basis of relative valuation, the stock screens as cheap among peers.

We see that Valero's stock is the cheapest in terms of trailing 12 month as well as forward valuations with respect to its Gulf Coast and Midcontinent peers. The market seems to be discounting Valero more than required. Additionally, the 2.7% dividend yield is hard to ignore.

Final takeaway
The Brent-WTI and Brent-LLS differentials are here to stay unless US crude oil production slows down, or unless Washington allows crude oil export. Production growth is expected to slow down in the second half of this year according to the International Energy Agency, while exports are not really in the horizon. Either way, Valero Energy seems set to gain.