Hot new models like the Dodge Charger SRT Hellcat have given Fiat Chrysler Automobiles a lot of buzz. The stock is soaring. But quality is becoming a big concern. Source: Fiat Chrysler.

What's not to like about Fiat Chrysler Automobiles (NYSE:FCAU)?

If you're any sort of car fan, it's hard not to have a soft spot for the company that makes Ferraris, Maseratis, and the fire-breathing Dodge muscle cars.

But there are more businesslike reasons to be intrigued by the recently merged company. CEO Sergio Marchionne has impressed observers with his ability to deliver on audacious-sounding plans. Sales have been rising, and finances improving. The company's recent stock market performance has been terrific.

Still, there's one very big reason to worry that FCA's renaissance might go off the rails: The company's quality continues to lag its rivals' in a major way.

FCA's stock price has soared, but its quality hasn't
Investors have undeniably been impressed by the stock's recent performance. Since debuting on the New York Stock Exchange in October, FCA's shares have risen more than 70%. 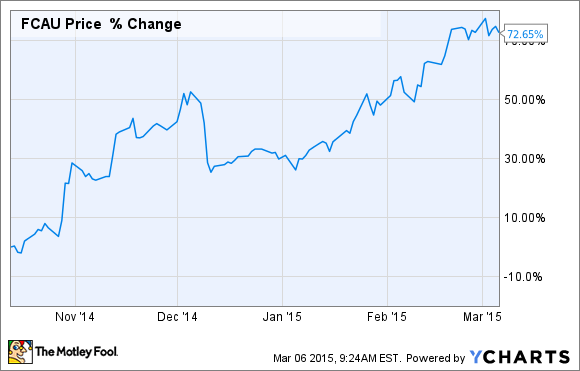 But reviewers and industry experts haven't been nearly as impressed.

FCA's Chrysler, Dodge, Jeep, and Fiat brands ranked 23rd, 25th, 27th, and 28th -- out of 28. Of the four, only the Dodge brand had any models recommended by the august consumer magazine's auto experts (the Challenger and Durango). Fiat Chrysler's Ram truck brand wasn't included in the rankings.

It's not that the magazine hates FCA's products. Several recent models have received high praise. But to achieve the coveted "recommended" status, the model's quality has to be at least average in the magazine's surveys. That's where FCA's efforts have fallen short.

Lest you think Consumer Reports is some sort of Detroit-hating outlier, it's not alone.

The Vehicle Dependability Study measures the number of problems reported in a vehicle's third year of ownership. It is considered an excellent measure of how well a brand's cars hold together as they age.

That's not the only measure of quality, of course, but it's an important one. Here, again, nearly all FCA's brands landed near the bottom of the charts. Only Ram came in above average. 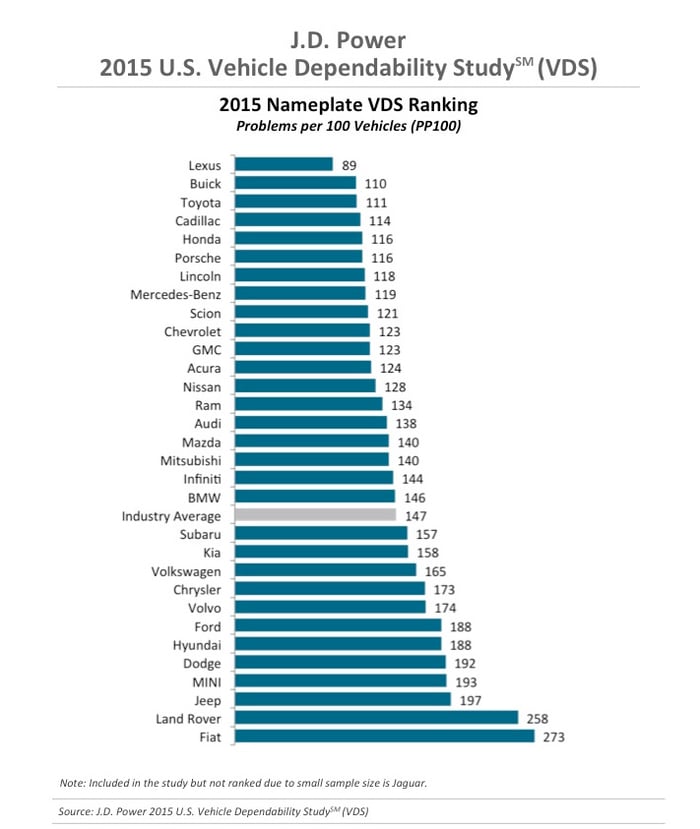 This could become a big problem for FCA, and for FCA's investors. Here's why.

FCA's expansion plans depend on winning a lot of new customers...
Last May, Marchionne and his senior team announced a sweeping five-year plan to transform the newly combined FCA into a united, thriving global automaker. The plan has a lot of moving parts, but many of them depend on new models and new markets.

Billions of dollars are being invested in these efforts, in the hopes of winning billions more in added profits over the next several years. But all of FCA's expansion efforts depend on winning new customers with strong products. Every single one of them.

What happens, though, if those potential new customers are turned off by FCA's quality woes?

...but retaining those customers could be a big challenge
The old Chrysler lost a great deal of market share in the U.S. due to inferior quality compared to nearly all of its rivals. Under FCA, the old Chrysler Group's brands are building -- subjectively -- far better vehicles. They have much nicer interiors, they ride and perform better, and they're much more capable.

But they're still missing the reliability improvements that nearly all of FCA's competitors have made in recent years. Look no further than FCA's old Detroit rival, General Motors, which put two of its brands in J.D. Power's top five.

General Motors has spent a fortune on improving its factories and processes to produce better-finished, longer-lasting products. The results are showing up in surveys like these, and they lend serious credibility to GM's expansion plans.

The contrast to FCA is clear, and the conclusion uncomfortable: FCA might be spreading its resources too thin as it rushes to expand. That could prove to be an expensive mistake in time, one that FCA investors should ponder very carefully.