You'll be seeing more of these stores popping up as the deep discount retailer accelerates its expansion plans. Image source: Flickr via Random Retail.

The important information for investors in deep discount retailer Dollar General (NYSE:DG) earlier this week wasn't the financials it reported in its fourth-quarter earnings release, but rather just how big of a blow losing the Family Dollar acquisition bid was to its future.

That news wasn't spelled out in the company's press release or in its subsequent conference call. Instead it was revealed in the announcement it was going to be opening 730 more stores this year, representing a 6% increase in total square footage, with another 8% jump next year.

When expansion is warranted
Not that the revenues and earnings it posted don't support the expansion, but competition is getting real now, and with both Wal-Mart and Target experimenting in the local convenience store format, it's imperative for Dollar General to grow.

Dollar Tree is the most profitable of the three retailers in terms of operating margins, and while there's reason for its investors to be concerned that Family Dollar's troubled business will drag its performance down, the discounter believes it can instill the discipline to make the necessary improvements.

That's a direct assault on Dollar General, and with Wal-Mart in particular accelerating the expansion of its small store footprint, like a shark, it needs to keep moving or it dies.

Smoking good results
Dollar General reported fourth-quarter revenue jumped almost 10% on a near 5% increase in same-store sales. That generated net income of $355 million, or $1.17 per share, up 16% from the year-ago period, driven by balanced growth in both consumable goods and non-consumable merchandise like apparel and home goods.

More than three-quarters of the SKUs on its shelves, or 76% of Dollar General's sales in the fourth quarter, were items priced at $5 or less, and private brands are accounting for a growing proportion of its sales that now has a penetration rate of 24%, with 6% more SKUs than in 2013.

No doubt thanks in good part to CVS Health's decision to ban tobacco from its stores, Dollar General was able to report strong cigarette sales. Dollar stores, convenience stores, and gas stations have been the biggest beneficiaries of the pharmacy chain's antismoking policy that went into effect last year.

More competition in more places
Importantly for Dollar General, though , it also increased both customer traffic and average ticket size, meaning it was bringing in more customers who were spending more at the store. Whether it was because of tobacco or not was unsaid, but many such retailers were hoping the addition of cigarettes would attract customers who would then buy other items while they were in the store.

Yet Dollar General realizes the extent of the competitive threat arrayed against it, and despite the planned expansion, guided full-year earnings below analyst expectations. 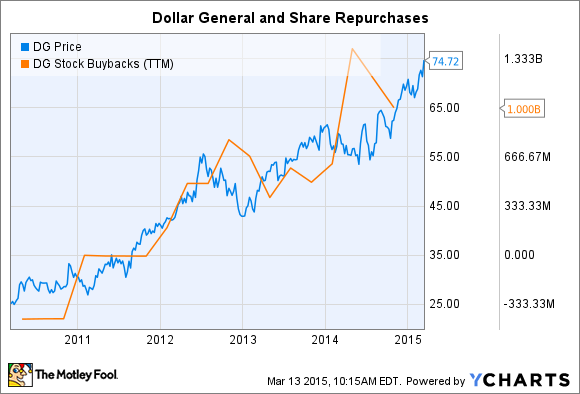 Investing in its stock
The other bit of news Dollar General dropped was that it was it was planning on buying back $1.3 billion worth of stock this year. That's likely a sop to investors who may be concerned about the competitive environment the deep discounter faces.

From the time Dollar General went public again in 2009, it has repurchased some $2.1 billion worth of stock, so this latest buyback announcement amounts to 62% over what it's repurchased in the past five years. Now it's buying back more stock than it ever has before, and it's also opening more stores at a quicker pace. At some point, investors may question whether its footprint is becoming unwieldy.

Considering how it did in the fourth quarter and across all of 2014, Dollar General hasn't reached that point yet, but as competition becomes even more pointed, all of that activity may exhaust the company's ability to grow efficiently and effectively.