With oil prices having dropped by roughly 50% since last summer, U.S. oil companies have quickly reduced their investment plans and idled drilling rigs. Many pundits have assumed these actions would quickly be followed by falling production numbers.

While that might seem intuitive, it did not prove true. At some point, reduced drilling activity will inevitably lead to a fall in crude oil output -- but that point could be far in the future. For the moment, domestic oil production is still rising steadily.

Doing more with less
The number of oil rigs drilling in the U.S. has plummeted by more than 40% since last October, according to oil-field services company Baker Hughes. However, energy companies logically keep their best-performing rigs working while dumping those that are less productive. Furthermore, oil producers are constantly working to become more efficient.

The result is that U.S. oil production growth is as strong as ever, despite the reduction in drilling activity. To get a sense of just how little the falling rig count has affected production, it's useful to compare U.S. petroleum output in 2015 with 2014 numbers.

Output on the rise
Last week, U.S. crude oil production rose by 42,000 barrels per day compared to the previous week, reaching 9.37 million bpd. This was up by nearly 1.2 million bpd from the same week of 2014. Last week was not a fluke, either. The four-week average posted a similar year-over-year rise.

The pace of oil production growth is also increasing. For the first week of March 2014, production was just about 1 million bpd higher than the same period in 2013. In other words, while U.S. oil producers are operating significantly fewer rigs this year, they are driving even stronger output growth than in 2014, when oil prices were almost twice as high.

Will prices plunge?
Despite the seemingly inexorable rise of U.S. oil production, prices have stabilized in the past month or so, with the international Brent benchmark near $60 and the domestic West Texas Intermediate near $50. 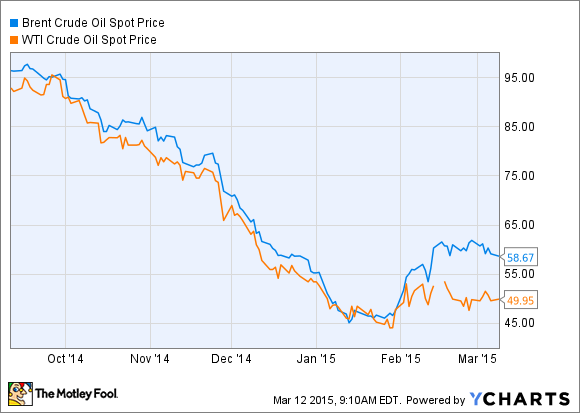 As I described last month, oil prices could come crashing down again as storage fills up, unless supply is first brought in line with demand. Domestic oil inventories have risen by another 34.8 million barrels in the five weeks since I wrote that piece.

Most importantly, crude oil stocks at Cushing, Oklahoma -- the delivery hub for the U.S. WTI oil contract -- have skyrocketed from 32.1 million barrels at the beginning of 2015 to 51.5 million barrels as of last week. The hub has about 70 million barrels of working storage capacity, so more than half of the available storage has filled up in the last two months.

At that rate, the remaining storage in Cushing could fill up before the post-Memorial Day seasonal increase in oil demand kicks in. If it becomes too difficult to find storage space, holders of physical oil will have to cut their asking prices to sell their crude, pushing oil prices down even further.

No price rebound in sight
Even if oil traders can find enough storage space to stash all of the excess oil being produced today, investors shouldn't bet on a significant bounce in petroleum prices anytime soon.

With so much oil in storage, there will be a stampede of holders to sell at any point the price rises significantly. After all, the longer they wait to sell, the more storage fees they rack up.

This will be aggravated by the growing "fracklog" -- to use a term coined by Bloomberg. Thousands of wells in the U.S. have been drilled but not fracked, as oil companies wait for higher prices to open the taps. The combined production capacity of these wells probably totals millions of barrels per day.

While oil producers don't have to pay storage fees for oil they leave in the ground, the need for cash will likely cause many of them to start the flow of oil at the first sign of any price recovery. This will limit the extent of any price rise, because a drop in U.S. production could quickly be reversed by starting the flow of oil from these nearly complete wells.

All in all, oil market fundamentals still suggest things could get worse before they get better for oil producers.