Nike (NYSE:NKE) is a powerful global brand with strong presence in emerging markets. However, the recently released Credit Suisse Research Institute's Emerging Consumer Survey is highlighting a worrisome trend for investors in Nike stock, as the company is reportedly experiencing declining market share when it comes to purchase intentions in Brazil, Latin America's biggest economy and a major market in the sports world.

According to the report, purchase intentions for Nike products "purchase intentions" declined 13% in Brazil when comparing 2014 versus 2013 figures. The data is particularly intriguing since Nike was a big sponsor in the soccer World Cup last year, the company even sponsored the powerful Brazilian home team during the competition.

One first possibility could be that Brazilians are massively disappointed with the humiliating 7-1 defeat their team suffered against Germany in the World Cup, after all, soccer can be a matter of life and death to many Brazilian fans. However, that doesn't seem to be the case, Adidas -- Germany's sponsor in the World Cup -- saw a decline of 3% in purchase intentions according to the report from Credit Suisse

Blame it on Rio
Trevor Edwards, President of Nike Brands, admitted in the company's latest earnings conference call that performance in Brazil is slowing down. Edwards attributed this setback to macroeconomic headwinds, and highlighted the fact that Nike is working on improving the retail experience in Brazil to reverse the situation.

In Brazil, second quarter revenue growth slowed, as volatile macroeconomic conditions make for a more challenging environment. That said, we see this environment as an opportunity to do what we do best, accelerate our transformation of the marketplace, fueled by the category offense. The consumer's passion for sport and the Nike brand remain strong, and we are focused on creating elevated and differentiated retail experiences for our consumers in Brazil, as we have done in North America, Western Europe, and China.

The fact is that economic growth in Brazil has been quite disappointing over the last several quarters, and things don't seem to be improving. On the contrary, economic activity is contracting, and inflation is at record levels for the last decade. Economists are on average expecting a 0.78% decline in GDP during 2015, while inflation is forecast to be at 7.93% during the current year.

Nearly 1 million Brazilians marched in different cities and towns to protest against economic conditions and political corruption on Sunday, so the situation is getting tense from a social and political point of view.

Investors will get a clearer picture when Nike reports earnings for the third quarter of fiscal 2015 on March 19, however, everything seems to be indicating that economic conditions in Brazil remain a considerable headwind for the company during quarter ended in February.

A healthy global picture
Nike's problems in Brazil seem to be mostly due to economic headwinds, as the company is doing well in most other emerging markets.

The following graphs from Credit Suisse Research Institute's Emerging Consumer Survey show how different brands are doing in key emerging economies. The charts show: Spending intentions-what percentage of consumers indicate they will be purchasing these brands in the next 12 months, spending momentum -- how intentions differ from last year's survey --, and the relative size of the market opportunity -- the size of the bubbles are in proportion to the GDP of the countries in which these brands are most prominent. 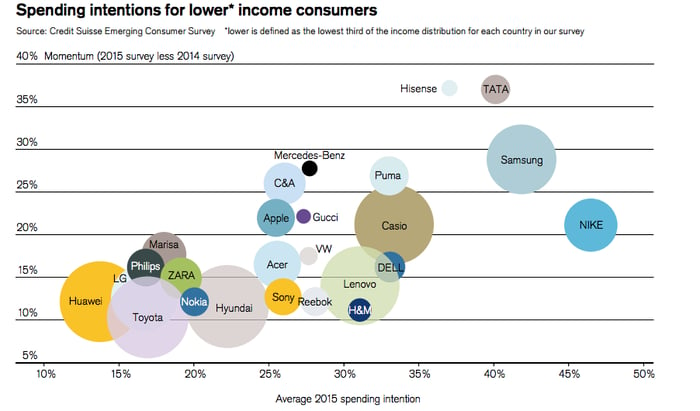 We can clearly see that Nike is still performing quite well among both high income and low income consumers in emerging markets. The Nike brand is showing strong momentum in spite of its relatively big size, and opportunities for expansion are still significant.

Financial performance confirms that Nike is still healthy in emerging markets in spite of the slowdown in Brazil. Total sales in emerging markets grew 4% during the quarter ended in November, and sales excluding currency fluctuations jumped 13% in this key segment during the period. Future orders were below expectations, though, increasing only 1% in constant currency.

Nike's revenues in Brazil seem to be under heavy pressure, but this is most likely due to economic headwinds as opposed to company-specific issues. Nike is still a solid global brand with strong momentum in emerging markets, so performance should turn for the better once conditions in Brazil improve. Investors may need to be patient, though, because things are not looking pretty in Brazil lately.