The price of oil was pummeled over the last few months of 2014, sending oil stocks on a nauseating downward ride. After relative stability over the past month or so, the oil market has now restarted that roller coaster ride with another downturn picking up speed over the past couple of weeks. While some investors are again bailing on energy, investors with iron stomachs see this most recent sell-off as an opportunity to buy energy stocks they've had their eye on for a while.

Three Fools with said iron stomachs recently volunteered to give readers a peak behind the curtain of their own portfolios. Each has offered up an energy stock he is planning to buy in the very near future.

Matt DiLallo: I've had my eye on National Oilwell Varco (NYSE:NOV) for quite some time. As a key supplier to the energy industry, National Oilwell Varco is really the premier "pick-and-shovel play" to profit from the overall growth of the energy industry. In fact, key doesn't tell the half of it, as the company has been dubbed "No Other Vendor" because it sells almost everything the industry needs.

Despite its importance to the industry, I've held off on buying shares. Admittedly, that's because I'd been directing much of my energy investment capital toward the higher growth potential of U.S. shale drillers. In hindsight, some of those dollars would have been much better off simply being invested in National Oilwell Varco. However, with National Oilwell Vacro's stock now more than 40% off its 52-week high, which suggests how badly some of my shale investments have fared, I'm intrigued by the opportunity of buying this great company while it's still on sale.

That being said, I'm not quite ready to buy the stock just yet, given the continued uncertainty within the industry. Maybe I'm being greedy, but I've decided to write puts on the company's stock in order to buy it even cheaper, or earn income while trying. I was recently able to write $50 put options that expire in August, which would enable me to buy the stock at a net $46 a share if the stock is $50 a share or below at expiration. That net buy price is actually 12% less than what it would have cost me to buy shares at the time I wrote those puts a few weeks ago. Even better, in my book: The cash I'm using to secure the trade is picking up an 8% yield over those six months.

If I'm not successful in my first attempt at buying NOV, I plan to write new puts and try again, unless shares have skyrocketed beyond my comfort zone by then. In that case, I'll just have to be content with the 8% return on my cash in six months, which really isn't a bad outcome in my book.

Tyler Crowe: I swear, one of these days I'm going to take my own advice and actually buy shares of ExxonMobil (NYSE:XOM). Really, the only thing holding me back is that I want to take a larger position than I can at the moment. Hopefully, it will happen sooner than later, because today might be one of the best times to invest in ExxonMobil.

While the rest of the energy world is reeling from the fact that oil prices are plunging, ExxonMobil has been preparing for the possibility that oil prices could plunge for years.

Back in 2013, independent oil producers were laughing at ExxonMobil's decision to slow capital spending when the U.S. shale was going bonkers, and companies were loading up on debt to grow production at an unprecedented rate. Today, though, those same companies are struggling under heavy debt burdens while ExxonMobil has put itself in the perfect position to take advantage of struggling companies during this down cycle, with a stellar balance sheet and a portfolio of assets that is throwing off free cash flow, and rates of return that make the rest of Big Oil jealous. 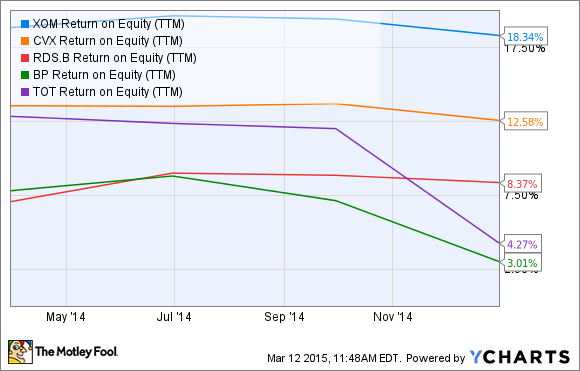 Please, Mr. Market. Let this period of cheap oil last a little bit longer so I can make a big purchase of ExxonMobil at a discount, because with oil prices as low as they are, I can't think of a better time to buy.

Jason Hall: I don't think Tyler's apparent inability to dollar-cost average into his full position of ExxonMobil is a sign of weakness, as I've also held off on buying shares of Core Laboratories N.V. (NYSE:CLB), a company I've followed for about a year, and really begun to love over the past six months. I've written about it here and here in recent months. Heck, I even inspired Matt to write this article about the company.
Okay, so maybe I just inspired the headline.
At any rate, I really do think this is a company the market really doesn't understand, and that, while 2015 could be a tough year, has a very bright future. Core Labs helps oil producers maximize how much oil and gas they can produce from a reservoir, which drives down the cost of production per unit of oil produced.
This has never been more important than it is in today's "cheap oil" climate. The company's Reservoir Description segment will face challenges simply based on the massive reduction in active drilling that's already happening, but Production Enhancement -- the segment focused largely on existing wells -- is likely to see strong demand as oil companies focus on maximizing output with minimal drilling.
Based on the strong position the company is in, its great technology and leadership, and the long-term demand for the kinds of services it offers, I'm planning to pick up shares as soon as Foolish trading guidelines allow.