With the stock market still close to record highs, many stocks are starting to seem expensive. However, there are always good deals to be found, so we asked three of our analysts to tell us about stocks that could be great buying opportunities right now. Here are their picks:

Dan Caplinger: Energy stocks have taken huge hits lately, and even Dow component and blue-chip stalwart ExxonMobil (NYSE:XOM) has felt the pinch of crude oil prices, which have fallen by more than half in less than a year. But as typically happens, short-term-focused traders have sent Exxon's share price down much further than the true change in its long-term prospects would warrant.

ExxonMobil will inevitably see massive drops in revenue and earnings in 2015 as the oil giant adjusts to the reality of lower prices for oil and natural gas. But as an integrated oil company, Exxon also has some offsetting benefits from low oil prices, as its refinery and marketing operations tend to see their profits rise when oil gets cheaper. Moreover, Exxon's midstream network of pipelines and storage facilities should remain in high demand, giving it a competitive advantage over independent producers that don't have the flexibility of storing crude until market conditions improve.

A few energy analysts believe that crude oil's drop might never reverse itself as the world weans itself off fossil fuels. Yet most analysts believe that the shift away from fossil fuels will take decades to play out, making oil and gas production an important source of energy well into the future. Buying Exxon shares now has a good chance of paying off even without a return to former record highs for oil, and the possibility of higher crude prices is just icing on the cake for bullish investors.

Matt Frankel: One cheap stock that is a long-term winner is American Express (NYSE:AXP), which has fallen by more than 13% so far in 2015. 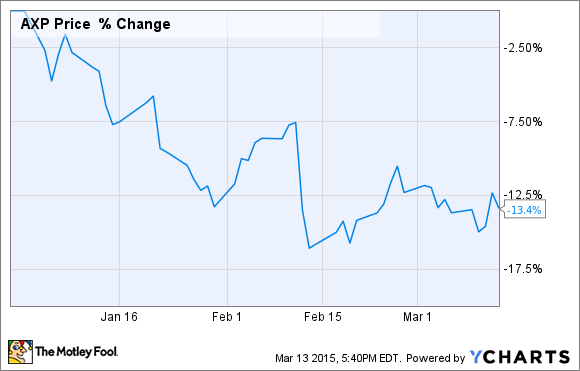 There have been a few factors contributing to American Express' fall. For starters, the company recently lost its exclusivity agreement with Costco. The market's negative reaction to this is certainly understandable. After all, 8% of Amex's credit card spending takes place on Costco-branded credit cards. Around the same time, the company also lost its co-branding partnership with JetBlue.

Then, American Express lost a legal battle, and is no longer allowed to prohibit retailers from encouraging customers to use other types of cards (such as Visa or MasterCard).

CEO Ken Chenault admitted that these developments will hurt American Express' revenue over the next couple of years. However, he also said the company should still be able to achieve its goal of 12-15% annual EPS growth over the "moderate to long term", which (if accurate) makes Amex's P/E of 14.5 times TTM earnings seem downright cheap.

In a nutshell, American Express is the best at what it does, with or without any individual partnership. The company creates exclusive "clubs" of cardholders that attract an affluent consumer base. As a result, American Express can charge merchants higher swipe fees than its competitors can, and can command higher annual fees from its cardholders.

American Express is cheap because of temporary setbacks, so now could be a great time to get in.

Jordan Wathen: Slowly but surely Capital One (NYSE:COF) has grown from its roots as a credit card company to a true bank, gathering deposits by acquisition of ING Direct online and North Fork Bancorporation in New England. Today, it has a healthy balance sheet, and while credit cards are still at the forefront, it has diversified into consumer lending (mostly auto loans) and commercial banking for businesses.

Its growth is starting to pay dividends. It deferred dividend hikes and share repurchases during the acquisitive years coming out of the 2008 financial crisis. But with cash building, the company is dedicating more to its payouts to shareholders.

In 2015, the bank hopes to put $4 billion back in shareholders' hands -- $3.125 billion in repurchases and the remainder in dividends. With the dividend set to grow to $0.40 per share per quarter, it will eclipse its pre-recession high water mark of $0.375 per quarter. Falling unemployment and low energy prices should be good for its loan book, which is most concentrated in loans to consumers.

At about two times tangible book value, and 11 times earnings, investors are letting Capital One trade inexpensively. After all, this is a company that has consistently earned more than 15% on its tangible equity over its history, a compounding machine that should reward investors who buy and hold for the long haul.