Last year, 32 large-molecule drugs, called biologics, with combined sales of $51 billion, lost patent protection. This year, another $28 billion worth will join them.

Contrary to what might be expected, pharmaceutical giants haven't been sweating the risk of low-cost generics disrupting their multibillion-dollar biologics market. Unlike chemical drugs, biologics are made from living cells, blood, or tissue. That makes them much harder for generic drug-makers to copy. In addition, until now, biologics enjoyed U.S. regulatory protection due to a lack of clarity regarding the approval process for biologics copycats.

But thanks to an FDA approval set in motion in 2010 by provisions in the Affordable Care Act, those days are over. It's been a long road, but Novartis' (NYSE: NVS) Zarxio recently took the honors of being the first biosimilar approved for the U.S. market, a move that should bring down drug costs for consumers.

This one drug could save cancer patients over $5.7 billion over the next 10 years. Sandoz, a unit of Novartis, is copying other Amgen blockbusters as well, including cancer drug Neulasta and rheumatoid arthritis medication Enbrel. Amgen's anemia drug Epogen is also at risk, with Hospira's biosimilar pending FDA approval. Just these four drugs generated nearly $11 billion in U.S. sales for Amgen last year. Sandoz also has expertise abroad in biosimilars, with global sales of $400 million in 2013.

While the coming biosimilars will likely strip major biologics makers of billions in revenue, the new market offers opportunities as well. Research group IMS Health projects that the global market for copycats of biologics should grow from $400 million in 2011, to an astounding $11 billion - $25 billion by 2020, accounting for between 4% and 10% of the total biologics market.

In other words, the market for biosimilars is poised to see an astounding 6,250% increase over 10 years. 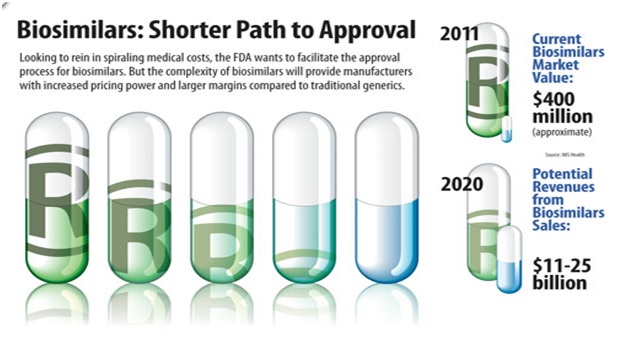 Where to stake your claim
The FDA opening the door to biosimilars has far-reaching implications for stock investors. Millions of doses of these drugs are distributed worldwide, but it is their penetration into America -- the world's largest pharma market -- that should turn this field into a gold mine.

Citigroup projects a transfer of up to $110 billion in market value over the next decade to companies with a strong biosimilar presence, at the expense of companies whose biologics are exposed to new competition. As is true of any emerging market, it's notoriously difficult to predict how things will shake out. But here are several companies worth watching in the biosimilars space.

Pfizer: If you can't beat 'em, join 'em
Motley Fool Todd Campbell pointed out in "Psst... Pfizer Just Told Investors That This Is the Next Big Thing" that Pfizer's (NYSE: PFE) recent move to buy biosimilars company Hospira could prove to be brilliant.

Hospira has expertise in the making and marketing of biosimilars. The company's drugs Retacrit and Nivestim are successful in Europe.

Pfizer is no slouch in biosimilars, either. Pfizer currently has five biosimilars in development. Johnson & Johnson's (NYSE: JNJ) Remicade looks like it's in Pfizer/Hospira's crosshairs.

Remicade is one of the largest-selling treatments on the planet, and its patents are expiring in much of Europe. In the U.S., J&J will retain its exclusivity through 2018 on Remicade, but Hospira will continue launching its copycat in Europe, where it is licensed for the same diseases as Remicade.

Amgen copies the copiers
I own Amgen and don't plan to sell anytime soon. While the huge biotech stands to lose to companies targeting its original drugs, it stands to make as much, or more, money copying the copiers.

"The biosimilar market we're going after is dramatically larger" than what the company could lose, said Tony Hooper, Amgen's executive VP for global operations. Amgen is working on nine biosimilars based on competitors' drugs. The first should show up in 2017, with four more by 2019, including copycats of Roche's Herceptin and AbbVie's Humira.

A pure-play in biosimilars
Big Pharma has an advantage over small-cap companies in biosimilars because these drugs are so hard to develop and replicate. Companies like Amgen and Pfizer have the scientists and facilities to tear apart competitors' medications and figure out how to duplicate them.

But the biosimilar sector is enormous, and it's worth mentioning a pure play -- a company that focuses strictly on biosimilars. While the large drugmakers are considerably safer, for investors with nerves of steel, a small biotech working to make and sell biosimilars could be just the "David" ticket to beat the pharma Goliaths.

Founded in 2010, Coherus Biosciences' (NASDAQ: CHRS) biosimilars target three blockbuster biologics. The company issued their IPO in November 2014, at the price of $13.50 per share.

Leading Coherus' pipeline is a biosimilar of the Amgen's blockbuster Enbrel. The rheumatoid arthritis drug is the third largest-selling drug in the world, with global sales in 2013 approaching $9 billion for this one drug alone. Coherus plans to file for FDA approval of its biosimilar version next year.

Another plus for this company is that Baxter International bought a partnership with Coherus on this drug, paying $246 million  for commercial rights in Europe. In addition, the company has marketing collaborations in place with Medpace and Daiichi-Sanyo.

Coherus believes the biologics it's targeting should pull in nearly $30 billion  by 2017, a highly optimistic management guesstimate that gives ample room for the stock to go much higher. Meanwhile, regulatory refusal and litigation possibilities from Big Pharma companies eager to protect their turf expose this small cap company to substantial risks. I admit I'm intrigued, as the drugs Coherus has its sights on should prove highly lucrative.

Summing up
Biosimilars may not automatically substitute for the brands they seek to replace. An intense battle is going on over this exact issue. Biosimilar makers want their drugs to carry the same names as brands, so doctors don't have to prescribe biosimilars specifically. Branded drug-makers want biosimilars to carry their own unique names. If the unique name camp prevails, branded prescription drugs will be better protected from competition.

Still, even if branded drug-makers get their way, it will only delay the inevitable.

The FDA approval of Zarxio cleared up any lingering doubts that these drugs will penetrate the U.S. market. Given the pressing need to rein in the soaring costs of healthcare, as well as growing frustration with the sky-high prices biologic drugs command, for the global trillion dollar pharmaceutical industry, a new era is dawning.

Editor's Note: The article has been corrected to reflect that Pfizer's Remicade biosimilar has not been submitted to the FDA for approval. The Motley Fool regrets the error.