The Internet of Things is already well under way, and there's no denying its effects. The automotive, industrial, agricultural, and technology industries, as well as the public sector, have all embraced the interconnected world, and Cisco Systems expects $19 trillion in societal cost savings and revenue generation over the next decade.

That's why it's important for investors to consider a variety of IoT stocks now. To help narrow the list (or possibly add another idea or two), let's look at what Sierra Wireless (NASDAQ:SWIR) and Skyworks Solutions (NASDAQ:SWKS) are doing in the IoT, and which has the advantage in the space.

What they do
Sierra Wireless manufactures wireless, embedded modules for machine-to-machine devices, wireless gateways, and software to manage M2M communication. Eighty-five percent of its revenue comes from the modules, and they're used in everything from wireless connections for Tesla, BMW, and Toyota vehicles to smart lighting projects in some of the world's largest cities.

Skyworks Solutions makes analog and mixed signal semiconductors for Apple, Samsung, and other global mobile players. The company is coming off a stellar quarter in which it increased revenue by 59% year over year, mostly due to strong worldwide smartphone sales and upgrades from cellular phones to smartphone in developing countries . While Skyworks is heavily focused in mobile, CEO David Aldrich has said the company's technology is "a conduit into the Internet of Things."

How fast they're growing
Here's how both stocks have performed over the past 12 months: 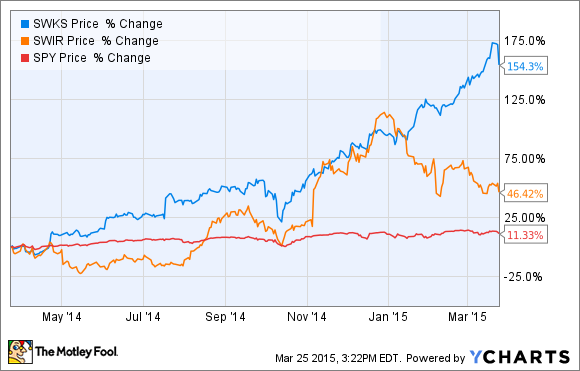 Both companies are clearly doing well, but Skyworks has pulled out bigger gains recently, and it's not the only IoT stock growing faster than Sierra Wireless.

But large gains aren't the only characteristic the companies share. Sierra and Skyworks have done a good job at eliminating debt and keeping cash on hand. Skyworks has no debt and $1.05 billion in total cash, while Sierra Wireless has very little debt -- $544,000 -- and $207 million in cash.

Where the two companies differ
Sierra is already firmly in the IoT space, and it appears poised to make bigger gains. The connected car is a big part of the Internet of Things, and the company's automotive prospects are bright.

Towards the end of last year, CEO Jason Cohenour said, "In the important automotive space, we secured new design wins for future connected car launches in North America, Europe, and Asia." He said he expects revenue from those deals to materialize this year and into 2016.

That's great news for two reasons. First, automotive sales are expected to grow in 2015 , enabling Sierra Wireless to sell more automotive modules in upcoming connected cars. Second, the connected car market is set to explode in the coming years, with Gartner estimating 250 million connected vehicles on the road by 2020.

Meanwhile, Skyworks is just getting started in the Internet of Things. The company's wireless technology is used in some General Electric healthcare equipment, and Skyworks recently sealed a deal to supply high-performance filter solutions to Panasonic devices. But the company needs to grow into additional IoT areas in order to truly solidify its position.

Aldrich said in January that the IoT would be one of Skyworks' key growth areas over the next year. The company will look to the automotive, home, and wearable markets to make this happen, as well as the possibility of licensing some of its technology to other companies for IoT use.

This is a close one
This is a tough one, but I have to give Skyworks the slight IoT advantage only because of its untapped potential. Sierra has made a number of strides over the past year based on Internet of Things sales and still has room to grow, yet Skyworks' gains over the same time have come from mobile. While I think Sierra Wireless is a good bet in in the IoT industry, I believe Skyworks' prospects makes it an even better play.