Dan Caplinger, Jason Hall, and Matthew DiLallo
(TMFGalagan)
Author Bio
Dan Caplinger has been a contract writer for the Motley Fool since 2006. As the Fool's Director of Investment Planning, Dan oversees much of the personal-finance and investment-planning content published daily on Fool.com. With a background as an estate-planning attorney and independent financial consultant, Dan's articles are based on more than 20 years of experience from all angles of the financial world. Follow @DanCaplinger
Follow @DanCaplinger

Oil prices have plunged recently, and many energy investors have retreated to midstream companies like pipeline giant Kinder Morgan to protect themselves from the exposure that oil and gas exploration and production companies have to the price of crude and natural gas. Yet for those who want a diversified portfolio of pipeline stocks, simply picking Kinder Morgan isn't the best choice.

To get more thoughts about good alternatives to Kinder Morgan, we turned to three Motley Fool energy analysts for their favorite stocks in the pipeline space. Take a look at the three companies they picked and see whether you agree with their arguments supporting their stocks.

Matt DiLallo: I like Kinder Morgan a lot, and am particularly drawn to the company's very visible five-year project backlog that currently stands at nearly $18 billion. There's a very strong value argument to be made for my other favorite pipeline stock, Enterprise Products Partners (NYSE:EPD). That valuation argument, when combined with the company's more conservative balance sheet and stronger distribution coverage ratio, are the reasons why I think investors might want to consider Enterprise instead of Kinder Morgan at the moment.
Since the start of 2015, Enterprise's unit price is down about 10%, while Kinder Morgan's stock is roughly flat. This caused the already cheaper Enterprise to sell at an even deeper discount to Kinder Morgan, as the following chart points out. 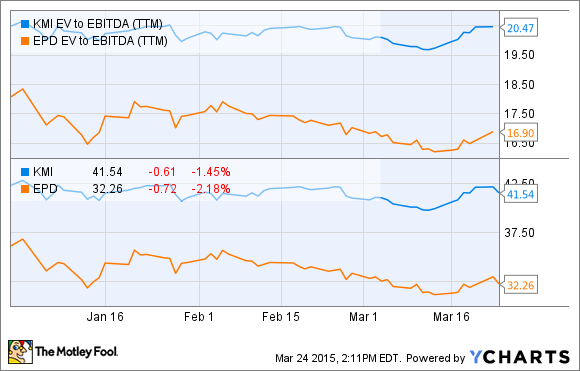 While we can easily justify Kinder Morgan's premium price, as it has stronger growth prospects due to its visible project backlog, it's harder to justify its slightly weaker financial metrics. For example, Kinder Morgan's debt-to-EBITDA ratio is well above Enterprise's, as we see on this next chart. 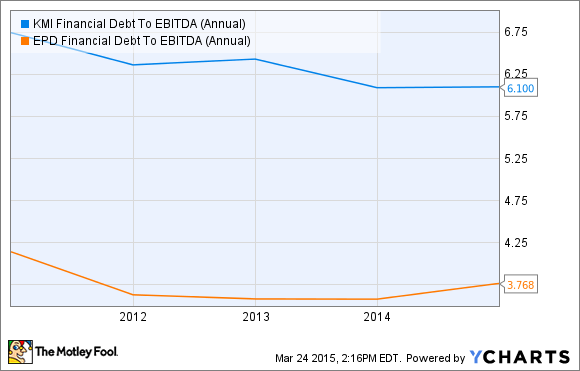 One reason why Enterprise's debt metrics are better is because it has retained $7 billion in distributable cash flow during the past five years, and used it to fund its growth instead of issuing debt and equity. The company did this by maintaining a very strong distribution coverage ratio of 1.4 times, which is well above the 1.1 times ratio targeted by Kinder Morgan. That conservative approach has earned Enterprise one of the highest credit ratings among MLPs.

With Enterprise's units going on sale, and combining that with its stronger financial metrics, I think there's a case to be made that investors should consider buying Enterprise over Kinder Morgan.

Jason Hall: One of my favorite pipeline operators is ONEOK (NYSE:OKE), and the MLP it operates, ONEOK Partners LP (NYSE:OKS). ONEOK is a "pure play" MLP operator, so the conversation below refers to both. ONEOK gathers and processes natural gas and NGLs, and then uses its more than 30,000 miles of pipelines to get the products to market. While the company has some exposure to commodity pricing in its gathering and processing business, fees based on volumes are the biggest driver of profits: 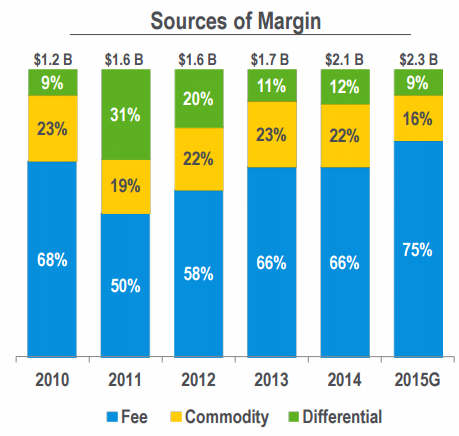 The current anticipated slowdown in oil drilling activity could have further impact on ONEOK, which gathers a lot of the gas and NGLs it processes and distributes from oil wells. But this is likely to be short term in nature, and the upshot is that stabilizing oil production should benefit the company by increasing NGL and gas prices to which it is exposed.

Most importantly, looking at the long run, ONEOK's gathering and pipeline services will see increased demand both to handle growing production, and to capture gas that would be flared otherwise.

If you're looking for a dependable source of stable and long-term income, ONEOK is a great choice. Add in the 20% drubbing the stock has taken during the past year, you can get it -- and its 5% dividend -- at a bargain compared to Kinder Morgan.

Dan Caplinger: Among stocks in the midstream energy business, it's hard to find one more ambitious than Enbridge (NYSE:ENB). The company and its subsidiaries already transport more crude oil from Western Canada and the Bakken shale than any other pipeline company, and Enbridge has aggressive growth plans that will involve spending tens of billions of dollars on commercially secured projects to grow its impressive network of pipelines even further. With many producers still sustaining, or even raising, their production volumes despite falling oil prices, demand for pipeline transport could well survive and grow, even if crude doesn't recover as quickly as many hope.

In particular, some have seen the recent Presidential veto of the Keystone XL pipeline as a sign that even midstream companies could be vulnerable to the energy downturn. Yet for its part, Enbridge has already completed two projects this year to help build out its connections between oil-rich areas of Alberta and the Gulf Coast and its key refining assets. Although Enbridge is likely to see its revenue slide this year, profits are actually seen recovering from 2014 levels, and investors will benefit from the stock's 3% dividend while they wait. That makes Enbridge look like a solid alternative to Kinder Morgan.