In a market where high growth companies are grabbing headlines, and the underlying economy is growing, is there a place in your portfolio for an age-old food company with shrinking sales?

That is the question facing General Mills (NYSE:GIS) investors today, and it is not an easy one to answer. In some ways, owning a consumer staple that will generate sales in good times and bad is a smart move, and in other ways, the shrinking company could be a value trap.

Cheerios is one of the staples that keeps General Mills stable. Image: The Motley Fool

Struggling to stay relevant
The biggest problem for General Mills today is its quest to grow in a market when consumers are moving to more organic, healthier foods. Brands like Betty Crocker and Green Giant have been hit especially hard, highlighted by a 2% decline in the meals segment and a 9% decline in baking goods during the fiscal third quarter. To stem the losses, General Mills spent $820 million to buy organic and natural product maker Annie's, which added about 1% to sales growth last quarter. But that was a small gesture for a business in dire need of reinvention.

Long term, General Mills needs to make its products more relevant to a new generation of consumers who are concerned about natural, organic ingredients, responsible sourcing, and GMOs. Small moves like removing gluten from Cheerios is a step in the right direction, but it will take time to rebrand and reformulate products that have a long history of success. Regardless, it needs to be done in order to reverse six straight quarters of falling year-over-year sales.

Steady as she goes
While its products may not be on the cutting edge of the food industry, General Mills is still a staple in nearly every American diet. Long term, that has resulted in steady growth, strong earnings, and a growing dividend for investors. Generally, General Mills has also kept its payout ratio at healthy 40% to 50% of earnings, but even that has slipped recently to about 70% as hedging and acquisition costs have eaten into quarterly profits. 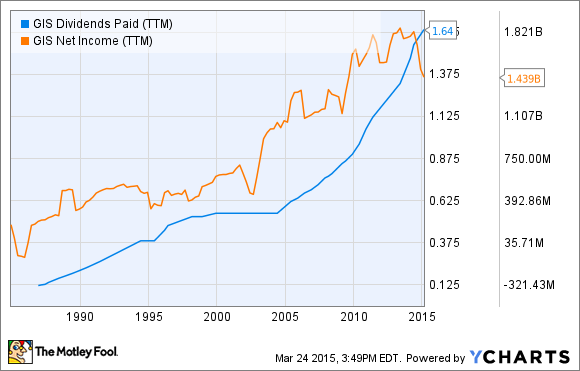 If there is one reason to be bullish on General Mills, it is the fact that we can expect the company to be around and profitable decades from now -- one of the main reasons to keep consumer staples like this in your portfolio.

Then, there is the fact that General Mills tends to do well during economic downturns, the opposite of most companies. In 2008 and 2009, when most companies were shrinking as the recession set in, General Mills was posting some of its best revenue growth rates in the last decade. The stock is like a security blanket for your portfolio, not particularly soft or comfortable, but it will keep you warm no matter how cold the market gets.

Cautiously optimistic
There is no question General Mills is going through some challenges adjusting to new consumer demands. The company was not built around providing natural and organic foods like some of its competitors . But it also has a distribution network that is the envy of many in the food industry, which could end up being an effective pillar of support as it reworks its own brands and acquires new ones.

Given its long-term history of steady profit and dividend growth, I am confident the company will reverse the recent weakness and become a growth company once again, even if that growth is modest. Trading at 19 times earnings and yielding 3.1%, I think now is a good time to buy into this household name.