From 2009 to 2014, American railroad major Union Pacific Corp. (NYSE:UNP) grew sales and profit at a compound annual rate of 11% and 25%, respectively. These growth rates are impressive for a 150-year-old company in a mature industry.

The company owes much of its success to a business model in which it consistently invests in its asset base to grow business, generates higher returns, and reinvests a portion of those returns to grow further. This is a sound strategy, but it can succeed only if returns justify investments. Here's a look at Union Pacific's assets to illustrate how they fit into the company's overall business plan.

Like all large railroad companies, Union Pacific locks its capital in net properties, or fixed and long-lived assets. These include land, roads, equipment, and technology, and make up 88% of the company's total assets. Current assets constitute about 9%, mainly cash and receivables. Union Pacific doesn't carry any goodwill or other intangible assets, which makes its balance sheet clear and transparent.

Fixed assets form the backbone
In the last six years, very little has changed in the proportion and composition of the company's fixed assets -- railroads continue to account for more than 60%, while land and equipment together make up another 25%. 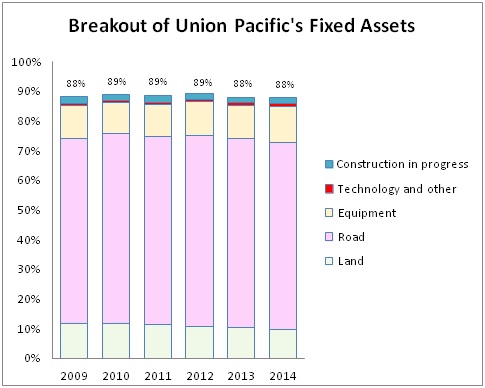 Other railroad companies such as CSX Corp., Norfolk Southern, and Kansas City Southern have a similar structure in which fixed assets on average representing 85% of assets. However, Burlington Northern Santa Fe, which is owned by Berkshire Hathaway, is Union Pacific's closest competitor in terms of scale of operations. 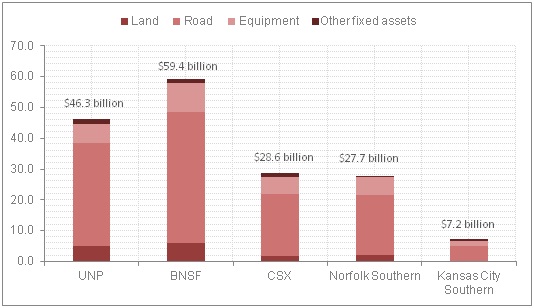 Composition of fixed assets of U.S. railroad companies in 2014. Source: Company 10-K. BNSF asset value is given in gross. Chart by author.

The value of Union Pacific's railroads compares with that of CSX and Norfolk Southern combined. Union Pacific covers more than 32,000 route miles, connecting 23 states. The company also holds much more land than its peers -- more than 1 million acres, an area about the size of Delaware, according to the Union Pacific website. Union Pacific owns more than 8,000 locomotives. 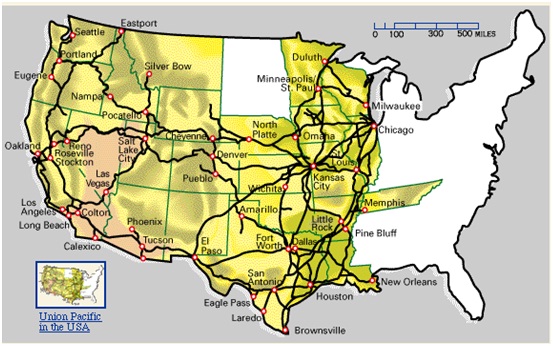 The Union Pacific network in the U.S. Source: Company website.

High asset quality
This enormous asset base needs matching investments. From 2007 to 2014, Union Pacific invested $26.4 billion in its network and operations. But how productive are the assets?

The chart below shows that in the last six years, Union Pacific has improved the quality of its assets and is using them to generate increasing amounts of revenue. It spends about $1.7 billion every year on its tracks alone to ensure they remain in good shape.

Of late, Union Pacific's fixed-asset turnover ratio has consistently remained north of 50%. This is among the highest in the industry. Union Pacific's current ratio (current assets divided by current liabilities) again may not appear as attractive if viewed independently. But when compared with industry peers, the company looks well placed. The ratio has improved over the years, and is currently at 1.24, which means Union Pacific can comfortably meet short-term obligations. Summing up
Union Pacific has formidable infrastructure. The company invests heavily to ensure its assets remain in good condition. Over the years, the assets have generated more revenue and are most productive when compared with other players in the industry. This bodes well for investors.