Just over a year into his tenure as Wal-Mart (NYSE:WMT) CEO, Doug McMillion has made some bold and surprising moves. A few months ago, the world's largest retailer announced that it would raise the wages of all employees to at least $9 an hour by April of this year, well above the federal minimum wage of $7.25, and then to $10 next February.

The move was a surprise for a company long criticized by labor unions and workers' rights activists for low pay and employee abuses, and has sparked a sea change in the industry as Target, McDonald's, and TJX Companies (the parent of TJ Maxx and Marshall's) have all promised similar wage hikes since Wal-Mart's announcement.

Wal-Mart watchers were shocked again when McMillon took a stand for gay rights last week when he sent a letter to Arkansas Governor Asa Hutchinson asking him to veto a state bill that could allow discrimination against gay Americans.

McMillion's latest move, however, seems more in keeping with Wal-Mart's traditional strategy. According to the Wall Street Journal, the retailer is leaning on suppliers to lower prices, asking them to give up joint marketing efforts and instead pass on reduced costs to the company that's almost certainly their biggest customer. In the past, these vendors have allocated a portion of their budget to promotional devices such as product displays or online ads.

Times are changing
The decision comes as Wal-Mart's industry leadership has faced significant challenges. Other everyday-low-price competitors such as warehouse retailing leader Costco Wholesale (NASDAQ:COST) and e-commerce kingpin Amazon.com (NASDAQ:AMZN) have encroached on Wal-Mart's territory and nabbed market share. As the chart below shows, Wal-Mart's sales growth has lagged significantly behind Amazon and Costco over the last five years. 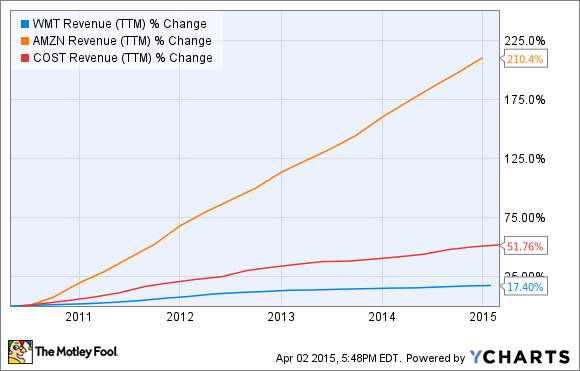 Wal-Mart still has more than double the combined sales of its two largest rivals, but their growth indicates that consumer preferences are shifting and there are two major reasons why: customer service and price.

Both Amazon and Costco have made each one a core component of their strategy. Amazon CEO Jeff Bezos is famous for putting the customer first at almost all costs, while Costco starts its workers at $17/hour significantly above the industry norm. Through different models, both companies have also embraced a low-price strategy that have won them loyal customers.

Those tactics would seem to explain why McMillon has made raising wages, in hopes of improving customer service, and lowering prices his two biggest initiatives. The company regularly ranks at the bottom of customer service surveys due to issues like empty shelves and long lines, a problem that may be corrected with increased and more motivated staff. The move to push suppliers to cut marketing costs should not only help Wal-Mart control costs but also add increased prominence to its private-label brands. Some suppliers have chafed at the move, precisely because it could lead them to lose share to Wal-Mart's own brands.

When Wal-Mart says "jump"
Wal-Mart's size is a major reason for its price advantage. With more than double the domestic sales of any retailer, the company can squeeze its suppliers in a way that many of its competitors cannot. For that reason, among others, many have questioned if Wal-Mart has become too powerful at times or abused that position. For many suppliers, Wal-Mart is their most demanding customer, exerting pressure not only on prices but also delivery schedules, inventory levels, and products specifications, which have prompted some manufacturers to stop doing business with it.

Still, when Wal-Mart says jump, suppliers tend to jump, and the push to slash costs is likely to be no different. If McMillion can succeed in bringing prices down and improving service, that will be a big win for both Wal-Mart's customers and shareholders.