It's been a strong year for machine vision company Cognex Corporation (NASDAQ:CGNX), with the stock up around 24% in 2015. Investors eagerly await the forthcoming first-quarter results, due at the start of May, for confirmation of the company's positive sales trajectory. Let's review the key metrics to look for and explain what they mean in the context of the company's long-term development, a key part of which will be the replication of the kind of large deal it has with Apple Inc. (NASDAQ:AAPL)(NASDAQ:AAPL)

Numbers and events to look out for

Here's a brief summary of what to watch:

Revenue, EPS, and Apple
Cognex has beaten EPS estimates in its past four quarters, in part because of success in signing more larger-size deals. For example, in April of last year Cognex signed its largest ever order, with an unnamed customer. At the time, management's expectation was for the deal to contribute $40 million of revenue in the third quarter of 2014, only for expectations to be raised to $60 million later on.

Cognex has a strict non-disclosure agreement with Apple, but SEC requirements meant Cognex had to disclose the company as its largest customer in its 2014 10K filing. In fact, Apple accounted for 14% of direct and indirect revenue in 2014, whereas in "2013 and 2012, no customer accounted for greater than 10% of total revenue."

What the Apple deal means
Clearly, signing more large deals, such as with Apple, is the key to Cognex's continuing to beat estimates in the future. Moreover, on the earnings call for the second quarter of 2014, after the deal was initially signed, CEO Richard Willett argued: "We don't believe this is a one-time deal. Rather, it's the beginning of a long-term relationship with the potential for substantial revenue in future years."

However, don't expect any color from Cognex's management on the Apple deal, because according to Executive Chairman Robert Shillman on the fourth-quarter conference call: "The strict nondisclosure agreement with that customer remains in place. And because of that, we will not and we don't intend to provide any details about their specific projects or how our products are used in their manufacturing process." 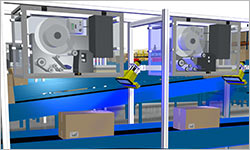 Future deals in consumer electronics and logistics; product ID growth
Going back to my review of the fourth-quarter results, Cognex's management was signaling the possibility of future deals in the consumer-electronics and logistics sector. In addition, on the earnings call, Willett argued that with orders in these two sectors, "there can be very significant deployments and at relatively short notice," as opposed to the "three-year product roadmap" that tends to take place in Cognex's traditional core automotive market.

The Apple deal is an obvious precedent for future consumer-electronics deals, while logistics has obvious potential for future growth -- not least from parcel delivery companies and e-tailers that need to better manage their distribution centers. Incidentally, Cognex's management is on record as believing that logistics is an addressable market of $250 million.

However, it isn't just about large deals, as the company is seeing broad-based strength with its ID products overall. Management has a target for 30% long-term growth in ID products, and investors will want to see Cognex match, or beat, this target in the first quarter. 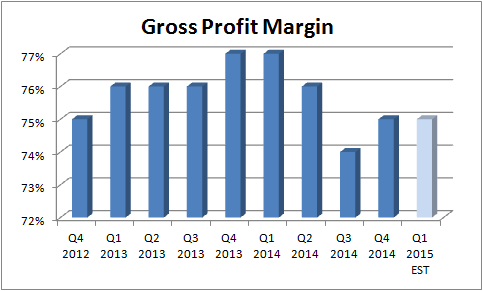 However, the increase in operating expenses is partly down to the "higher level of post-sale support" that comes with large deals, and gross margin can be reduced on larger orders.In other words, don't worry too much if operating and gross margins are lower than expected, because it could be due to the signing of large deals that will ultimately generate more profits in the future.

Summing up
All told, investors should focus on the long-term development of the company's orders, particularly in consumer electronics and logistics, rather than worry too much about the short-term effect on margin, revenue, or earnings. Investors should also look out for ID products growth, and to see whether Apple has added to its existing orders.

The stock has a tendency to be volatile over results, but long-term investors should focus on long-term development, and Cognex has been doing all the right things recently.