The past year hasn't exactly gone the way the gaming industry wanted. A weaker than expected economy in China and the government's crackdown on corruption had wealthy gamblers holding on to their money instead of gambling at Macau's casinos. 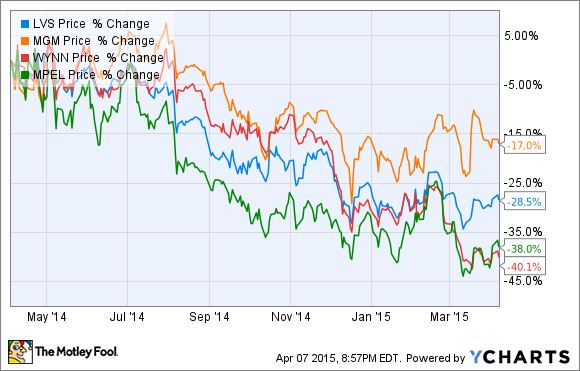 Finding the value in gaming
The two most important things to consider with gaming stocks are their price and their growth prospects. We'll start with what gaming companies are worth today.

The table below lists the enterprise value (market cap plus net debt) of each of the four companies compared against their EBITDA generated in the last year.

MGM Resorts has the lowest enterprise value-to-EBITDA ratio and Melco Crown has the highest. But with all four companies trading between 9.2 and 10.2 there's not much separation from a value perspective.

Macau is still a highly attractive market thanks to extremely high margins, but Las Vegas isn't the slow-growth little brother it used to be.

What's different for each of these companies is the base they're building on. MGM and Wynn only operate a single resort in Macau, so opening new resorts on the Cotai Strip will have a huge impact on their business, potentially more than doubling their revenue and EBITDA in the region. Las Vegas Sands has four major resorts in Macau, so adding another one will have less impact on a percentage basis.

If Macau isn't going to keep growing, I would lean toward companies that are taking market share by adding a single resort, which Wynn and MGM should do. Las Vegas Sands has held up best recently, but it will lose its grip on Cotai as at least six new resorts are built there in the next few years, so they're less likely to have the same growth rate as smaller competitors.

The winner is...
Even though it has the least exposure to Macau of all four companies, I think MGM Resorts has the best near-term growth opportunities and also the best value. Given its high debt load, it also has significant leverage if Macau or Las Vegas grow in the future, although that debt also comes with increased potential downside risk if things don't play out well.

When MGM Cotai opens, the upside increases dramatically. The resort will be about twice the size of the existing MGM Macau resort, which has generated $850 million in EBITDA over the past year. If we assume that the new resort only matches that performance the company's EV/EBITDA ratio falls to 6.8.

The upside for all three other companies is in Macau's overall growth. If Macau returns to double-digit growth, they all have higher upside, but I think its foundation in Las Vegas and growth opportunities in Macau make MGM Resorts the best stock in gaming today.