What: Media company World Wrestling Entertainment's (NYSE:WWE) stock fell 18% during the month of March, according to S&P Capital IQ data. 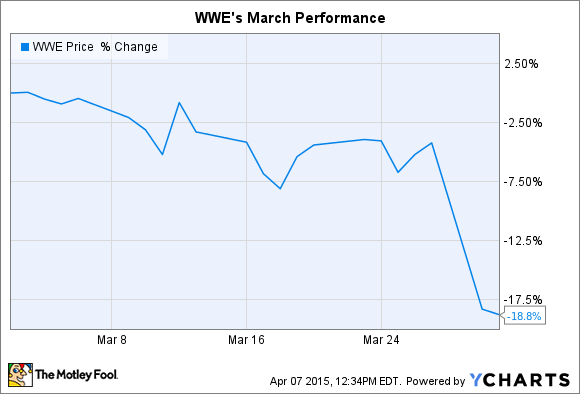 So what: Shares were hammered after the company posted a business update regarding its subscription television service, the WWE Network. The good news in that report included strong member growth. Thanks to a popular WrestleMania broadcast and "February free" promotion, the network passed 1.3 million subscribers just two months after hitting the 1-million-member mark.

However, that aggressive growth rate might not hold up. Yes, the company counted an average of roughly 918,000 paid subscribers over Q1 -- which is 27% above the prior quarter's total --  but management warned in the press release that it has very little visibility into the expansion path that this network might take. While executives are confident that WWE Network should grow over time, they can't say whether that growth will happen at a steady pace or whether it will include some large membership swings.

Now what: The company reiterated its prior outlook for 2015, but that's not saying much. Management's official view is that WWE Network could finish the year with as many as 2.5 million subscribers, or as few as 500,000. The resulting earnings for the company would span anywhere from a $10 million loss to a $23 million gain. Investors decided last month to penalize the stock for that huge range of potential outcomes.