If you have watched cable television lately, there is a good chance that you have seen GoPro(NASDAQ: GPRO)CEO Nicholas Woodman trudging through the snow. The executive stars in a series of ads for American Express, and in one, he waxes poetic about the heartbreak of convincing people to believe in you, and then failing.

While he is actually referring to his business prior to GoPro, his words also seem oddly relevant to the 2015 story for GoPro stock. Shares are down roughly 31% year-to-date, and the market seems to have lost confidence in the longevity of the business, as new competitors like Xiaomi and potentially Apple have emerged.

Last week, news surfaced that GoPro had been granted a patent for a cube-shaped camera housing for hardware that differs significantly from its standard design. While the patent did not apply to actual camera hardware, the document may hint at GoPro's next move to fend off competitors and secure a bigger piece of the low-end action camera segment. 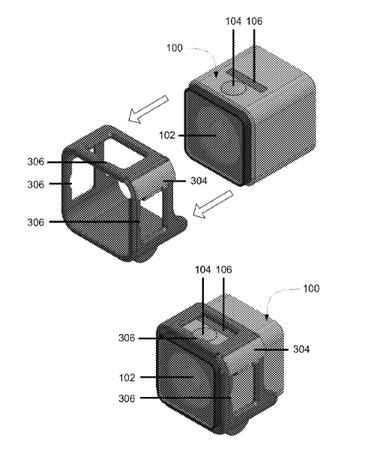 The patent
The latest patent shows a cube-shaped housing enclosure for a small camera. Like current GoPro devices, the hardware intended for the enclosure would have a lens on the front side and input mechanisms on another face of the device, connectable to various camera mounts. The cube camera described in the patent would have height, width, and depth measurements between two centimeters and nine centimeters each.

GoPro is currently the clear leader in action cameras with roughly half of the market, but it is facing increasing competition in both the high-end and low-end segments. The main hardware components of GoPro devices are not proprietary -- core video and image processing chips come from semiconductor company Ambarella. This makes the company particularly vulnerable to challenges posed by emerging rival devices.

An answer to emerging low-end competition?
Prior to the release of the $129 Hero model last year, GoPro had mostly been focused on selling high-end action cameras. However, an influx of new low-cost options necessitated that GoPro offer a cheaper offering to retain mind and market share. Xiaomi, with its roughly $65 Yi action camera, represents a significant threat to GoPro and sheds some light on the developing action-camera landscape.

While the camera has only been announced for China, it already has notable advantages over its Hero counterpart and signals the arrival of viable challenges to GoPro's dominance. The Yi camera is not waterproof without a case and does not come with a memory card but features Ambarella chips that enable 1080p video to be captured at 60 frames per second, while the $129 Hero is limited to 30fps. There is a good chance that the recent patent points to a new low-price camera that will compete with offerings from Xiaomi, Polaroid, and others.

The camera depicted in the recent GoPro patent bears a notable resemblance to a $99 cam released by Polaroid last year, and it is reasonable to expect that the new model will target a simliar demographic if it comes to market. GoPro has done a fantastic job of moving its high-end cameras to videographers and sports enthusiasts, but much of the expected growth in the action-camera segment will come from a more casual audience. The company needs to improve its low-end offerings if it wants to capitalize on more mainstream segment growth.

A new form factor and lower price point could help the company differentiate its hypothetical cube camera from its main line, while appealing to consumers looking for a small, affordable camera for filming things like pets and family occasions.

The margins question
If GoPro devotes greater focus to capturing the low-end camera market and defending against a swell of competitors, margins will likely suffer. Non-GAAP gross margin during the fourth quarter actually increased from 42% in the prior year to roughly 48%, despite the introduction of the $129 Hero.

Maintaining these margins is largely dependent on the performance of its new high-end products. Interest in these cameras is currently strong, and the devices are generally regarded as the industry standard. Even then, the company faces a formidable challenge as diminishing returns set in with frame rate and resolution advances, and the features of low-cost devices improve. GoPro still has plenty of room for sales growth, but the margins picture is not nearly as rosy.