What: While it wasn't a March to forget, it certainly wasn't a March Chesapeake Energy Corp. (OTC:CHKA.Q) investors will remember fondly. That's because the stock dropped 14% for the month. 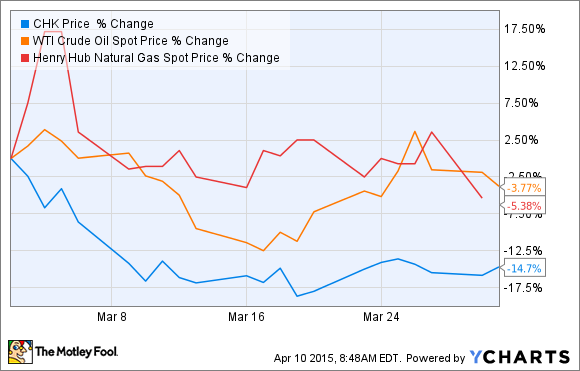 Clearly, weaker oil and gas prices fueled some of the stock sell-off. However, the company was also hit with an analyst underperform rating, and it cut another $500 million from its 2015 capital expenditure program. Mix it all together and you have a recipe for very poor stock performance.

This minimal growth isn't what investors want to see from what was supposed to be a growth stock. However, there are two reasons for the second cut to capex. First, the original plan would have resulted in the company outspending its capex budget by several hundred million dollars. The new plan has the company investing within cash flow. The other reason for the cut was continuing weak commodity prices, meaning there's less incentive to overspend when the returns just aren't there right now.

Now what: Chesapeake, like many of its oil and natural gas peers, is adjusting to market conditions by adjusting its spending. The company has significant flexibility to do so thanks to its strongest balance sheet in years. Its plan is to wait out the market and then restart its growth engine when commodity prices are higher.