Valero Energy Corporation (NYSE:VLO) has been a great investment for the past several years, handily beating the market since around 2010: 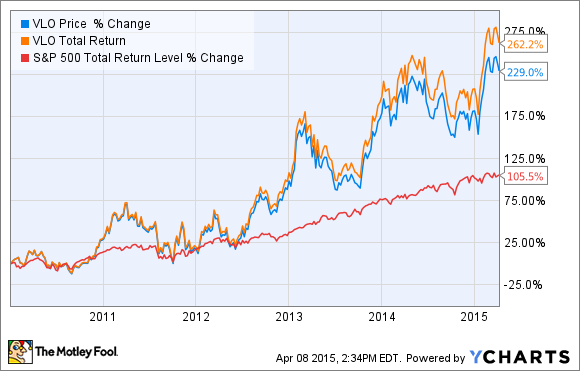 One of the main drivers has been the company's ability to refine crude oils that it can buy for cheaper than Brent crude, the international benchmark that's the main driver behind the prices of refined products such as gasoline and diesel. Since 2010, Valero's profits have absolutely exploded: 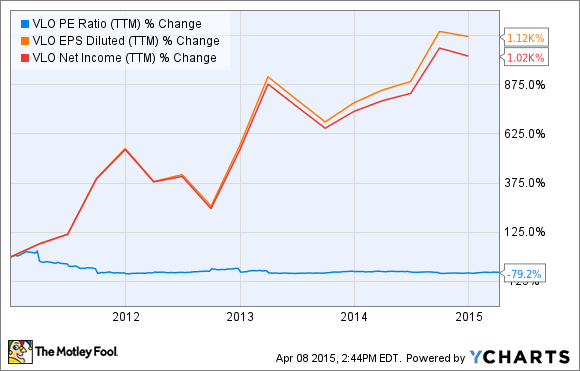 However, even with the market-crushing returns over the past five years, Valero stock has gotten cheaper on a valuation basis. So what gives? Is the market afraid that Valero's big advantage won't hold up? Let's take a closer look.

The Brent-WTI spread
Since early 2011, Valero and other U.S. refiners with access to American crude have gotten a huge benefit from the spread between Brent and WTI, or West Texas Intermediate, a common benchmark for American oil, which they've been able to buy for an average $10 discount to Brent: 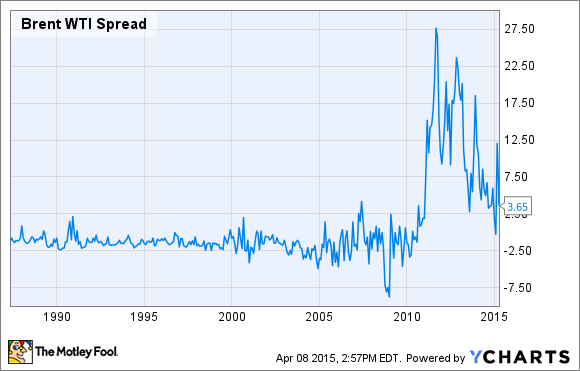 Since two-thirds of the world's oil follows Brent or a benchmark that tracks the Brent, Valero has been able to boost its profits significantly. Remember, the products it sells are more tied to Brent. However, that trend has been a product of the massive boom in U.S. oil production, which has grown by an astounding 3 million barrels per day since 2012:

At the same time, growth in global demand hasn't increased at the rate of production, and that's led to the big Brent-WTI spread that's been a boon for refiners such as Valero. On the other hand, it's been the driver behind the 50% fall in oil prices since last June as well.

As things stand today, the Brent-WTI spread is about $5, but it's been closer to $3 for most of 2014. With most in the industry predicting that domestic production will stop growing -- and might actually decline a little -- by June, there's potential for that spread to narrow even further. That would definitely affect the profits of Valero and other U.S. refiners that benefit from it.

But Valero has another big advantage.

All crude isn't the same
For those not in the know, crude oil from different geographies can be very different, ranging from the "light, sweet" and easily refinable crude produced in parts of the U.S. and Europe to the heavy "tar sands" oil from Canada that can only be handled by the most complex and technically capable refineries. So-called "sour" crudes fall somewhere in between and are typical of what's produced in the Middle East, Mexico, and the U.S. Gulf Coast. The short version is that each step from "light" to "heavy" and "sweet" to "sour" adds cost and complexity to refining, making the light, sweet varieties more valuable. Additionally, crude producers have to contend with shipping costs as well, which means that a producer in North Dakota using rail may have to discount his product versus a producer in Oklahoma connected to a pipeline.

This is a simplified version of a complex topic, but the short version is that crude oil prices can vary greatly from the major benchmarks, depending on where the oil is and what it will take to refine it. Crudes that refiners can get for less than the benchmark -- especially Brent -- are called "advantaged" crudes, because they're price advantaged versus the benchmark.

Valero is closer to and capable of refining advantaged crude
Valero's Gulf Coast refining operations are some of the most capable in the world, and they're also well located to accessing low-cost Maya crude from Mexico, a heavy, sour oil that it was able to buy for $13.73 per barrel less than Brent on average in 2014. With an average Nelson Index rating -- a common measure of refinery capability -- of 14, these refineries can handle just about any kind of crude Valero throws at them.

Valero is in a great position, both technically and geographically, to benefit from advantaged crudes above and beyond the Brent WTI spread.

Looking long-term
Let's face it: There are too many factors that can affect the Brent-WTI spread to know how sustained it will be. It has already contracted significantly over the past six months and could tighten further. On the other hand, the spread could widen again if American production growth doesn't slow as quickly as anticipated. The reality is, nobody knows for sure, and that means it's not worth basing your investing decision on.

However, Valero's geographical and technical advantages add measurable long-term value and should allow the company to continue sourcing advantaged crudes no matter the Brent-WTI spread. Valero's management has pulled a lot of the right levers over the past half-decade, preparing the company for the success and big profits we've seen in recent years.

Will those big advantages lead to outsize returns for investors? I think there's a solid chance they will.

Valero is a solid company with some strong advantages, and the stock also looks fairly priced, with a trailing price-to-earnings ratio of 8.5 -- well below the average of the past few years. Add in a modest dividend and a high likelihood of regular increases, and long-term investors will probably do well by holding Valero Energy in their portfolio.